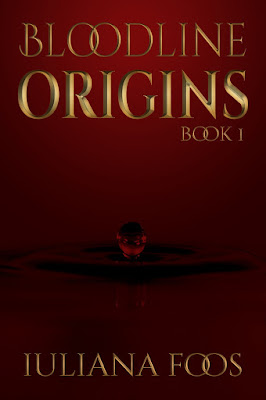 Author Iuliana Foos stopped by to share the release of her latest book that was released on April 11th by Soul Mate Publishing (my new publisher!) Take it away!

Hello, and thank you for hosting me today.

The first idea for Bloodline Origins sparked in my mind thirty-four years ago. I was a teenager, visiting Dracula’s Castle, back home, in Romania. Once I got over the cold stone walls, dark corridors and dingy rooms, my imagination went in overdrive. It was the first time I started to speculate how the world would be if vampires were real.

I strongly disagreed in my mind with the concepts I witnessed in movies and books for the last three decades.

Just like humans, my vampires are good and bad, driven by different motives. Some are creatures of the night, some blend in with us, unbothered by daylight.

The origin of vampires I always thought it to be out of this world. I never believed in curses or undead, but I was always fascinated with life beyond our loved blue planet.

So I combined the two and it is why vampires in my ‘Bloodline’ trilogy are of alien descent. Some of them are bloodthirsty, some protect humans, but they all fall in love and live lives led by passion.

Back Cover Blurb:
Determined to turn her fantasy into reality, Ana starts her journey to become a vampire. Along the way, she learns the truth about their secret society, discovers her prestigious bloodline and falls in love.

Not all vampires are accepting of humans and war looms in the shadows. An ancient tome reveals the vampires’ alien descent and sparks war.

An army bent on eradicating her coven’s existence threatens her new world. Survival or annihilation will be in Ana’s hands.

More About the Author
Born and raised in Bucharest, Romania, Iuliana Foos currently lives with her husband in San Antonio, Texas. When she doesn’t daydream or write, she enjoys drinking copious amounts of coffee and playing online multi-player games, hoping one day to have a white sanded beach as her backyard. Becoming a traditionally published author has been a life-long dream turned reality. Connect with her here: