Writing a Series by Michele Drier 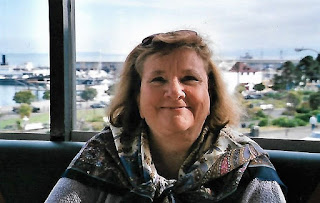 Author Michele Drier stopped by to share tips on writing:

Specifically, How to write a series. Take it away, Michele!

Series are difficult to write.

There’s always a balance between too much back story and too little. Too much clogs up the plot, runs the risk of an information dump and gives readers the ability to skip chunks of the book…not what a writer wants.

Too little can leave the reader adrift in a world of people he or she doesn’t know, with relationships undefined and situations without resolution. It’s as though your friend is telling a joke and cracking up and you sit there thinking “What’s so funny?” Your friend looks at you and says, “I guess you had to be there.”

I’m at that stage now in the tenth book in the Kandesky Vampire Chronicles. The series has seen a lot of turmoil, murder, violence and love. In addition to the overall theme of the series, that of love and commitment between women who are 21st century Southern California professionals and the vampires they love, 500-year-old Hungarians, there are gulfs so wide they may not be bridgeable.

So far, they’ve been attacked by other vicious vampire families, broken up a sex-trafficking ring, discovered how the Iranians used Chernobyl to store nuclear waste, survived kidnappings and murder plots, assassinated thugs and mobsters from Chechnya and halted international weapons -running.

Well and good. Lots of action, car chases, bomb plots interspersed with scenes of hot sex, emotional arguments and angst about what being a vampire means (not aging, never gaining weight opposed to never being out in the sun and giving up the foods you love).

Now we’re in the middle of #10. I know the love plot, it will include a character turning into a vampire and a wedding. The family will be working to curtail the Russian incursion into the West because they live in Ukraine, the vulnerable place that’s constantly in Putin’s sights. And their fortune depends on having free trade and information across Europe and the Americas.

What I don’t have is a title. This is a tad awkward. Usually the first thing I do, even before I begin writing, is to give the book a title. As a pantser, writing to the title gives me a road map for the plot. And from the title also comes the cover. I work very closely with my cover artist and she reads most of the book before she begins the design.

I have some things in mind, but nothing has resonated. SNAP: Saving Kiev. SNAP: The Final Love Story. SNAP: All for Love.

Something will finally click, I know, but for now, critique partners and beta readers have to cope with SNAP: #10. Not catchy, no hint as to the plot, no clue about the action. And worst for me, no idea for a cover.

There’s been discussion lately in various writers’ groups about what’s a good number for a series. Some lean on the “less is more” side and say three, a trilogy, makes a perfect series.  Some recommend seven. And then there’s Laurie King, whose 21st novel about Mary Russell and Sherlock Holmes will be out in June. And Lee Child with Jack Reacher and Janet Evanovich with Stephanie Plum. Upwards of 20 books in the series. 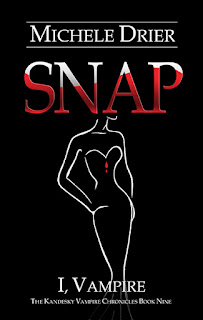 At this point, I’m planning on #10 as the last in the Kandesky Vampire Chronicles and it will be out late this summer. But once I have a title and write the resolution, will that pesky vampire family nag at me to continue their story?
Michele Drier was born in Santa Cruz and is a fifth generation Californian. During her career in journalism—as a reporter and editor at daily newspapers—she won awards for producing investigative series. She is the president of Capitol Crimes, the Sacramento chapter of Sisters in Crime, and the co-chair of Bouchercon 2020. Her Amy Hobbes Newspaper Mysteries are Edited for Death, (called “Riveting and much recommended” by the Midwest Book Review), Labeled for Death and Delta for Death, and a stand-alone thriller, Ashes of Memories, published in 2017. Her paranormal romance series, The Kandesky Vampire Chronicles, has consistently won awards and was the best paranormal vampire series of 2014 from the Paranormal Romance Guild. The series is SNAP: The World Unfolds, SNAP: New Talent, Plague: A Love Story, Danube: A Tale of Murder, SNAP: Love for Blood, SNAP: Happily Ever After?, SNAP: White Nights,  SNAP: All That Jazz, and SNAP: I, Vampire. Connect with her here:

*note from Nancy Lee badger: Happy Friday the 13th!
Posted by Nancy Lee Badger at 1:30 AM