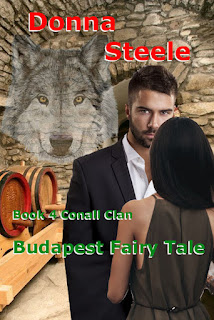 My friend and writing buddy recently returned from a trip that has fueled her stories with the characters and lovely landscape of Budapest and beyond. Take it away, Donna Steele!

Thanks, Nancy. Budapest Fairy Tale, the fourth book in the Conall Clan series, is now available. Marcel’s story takes us to Europe to continue clean-up of the previous Alpha’s scandals and maybe rock his world.

Blurb
When Marcel begins his tenure as Territory Alpha to clean up after Eric Davis’ devastating reign, he heads to Europe to oversee the dismantling of Eric’s holdings there. While in Budapest he makes a life changing discovery and learns what Lou, Brent and Wesley Conall already know
Jacquelyn has been in hiding for a long time, escaping what her corrupt Alpha wanted for her, but now that could come to an end, if she can still believe in Fairy Tales . . .
Excerpt
Jacquelyn Caron entered the bedroom and immediately her shoulders slumped. Once again, Adah had disappeared. How the hell did she get away this time? She was human and should be no match for Jacquelyn.
She would have laughed at herself for thinking this would be an easy job, if she didn’t have to face tracking the old lady down again.
How did that woman manage to get past her? It was beginning to feel like a contest, and Jacquelyn was losing.
Jacquelyn had her scent locked already from previous incidents. She began her search, hoping Adah hadn’t actually left the house this time.
That hope was dashed, after she was unable to find the woman anywhere. The cold weather should have kept her from walking far, so she must have called for a car. Jacquelyn had only been in the kitchen a few minutes. Adah had planned her escape carefully. Merde!
She stepped outside. Yes, Adah’s scent ended just down from the stoop. What a handful that woman could be! After nearly a year Jacquelyn had learned to adapt, however the irascible old biddy was tenacious when she wanted something. Even though Jacquelyn needed this job and the anonymity it offered, she had also grown fond of the woman, and was concerned about her. She needed to find her. Where would she go?
Jacquelyn hurried back to Adah’s bedroom. What had she been stewing on this morning?
There were papers spread out on the petite escritoire in her bedroom. Jacquelyn took a seat at the desk and began shuffling through them. She’d been looking at photos of the painting that had been stolen from her family all those years ago.
That damn painting! Adah was obsessed with it and had been like a bloodhound tracking it down, finally finding the thing. Her attempt to retrieve it had been brushed aside by the current owner. Jacquelyn had seen the man only once. She’d been stunned to realize he was a shifter and a strong Alpha. He’d treated the old woman like dirt beneath his feet. He knew Jacquelyn was shifter as well, and yet he neither acknowledged her nor responded to her automatic salute to an Alpha. He basically ignored her presence, acting as if she wasn’t standing there behind Adah.
Gods, she couldn’t be planning to confront him again, could she?
Jacquelyn jumped to her feet and raced to her used Mini Cooper. She knew the way to his estate. It was a place to start. She didn’t feel confident that the Alpha wouldn’t harm the elderly woman. Something tainted about that particular Alpha raised her hackles. 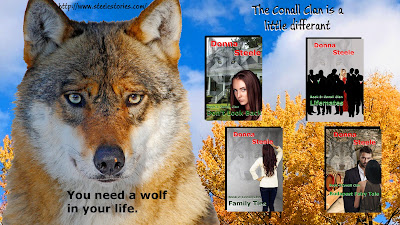 More about the Author

Women Strong Enough For Love
Donna writes science fiction, paranormal and small-town romances about women coming into their strength and having the courage to find and accept love.
Now that she has retired from going into an office every day, she created an 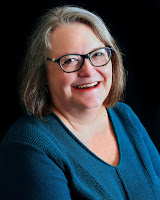 office at home and writes full time. Talk about living the dream!

She was the girl at the party who was yearning for the quiet corner and a book to read (go Rory Gilmore!) and has been writing in her head since she learned to read. Getting those stories down on paper (or in her laptop) has been more fun than she ever imagined it could be.
The possibilities of science fiction have always drawn her, and she’s read them all, there just needed to be a little more romance in them. She finally got up the courage to write them herself and is delighted to be able to share these stories with you.

She is a member of Romance Writers of America, the Fantasy, Futuristic & Paranormal Chapter of RWA and the Heart of Carolina Romance Writers. She can be reached at:
www.steelestories.com
www.facebook.com/donnasteeleauthor
https://twitter.com/steele_donna
https://www.bookbub.com/profile/donna-steele