Christmas is Right around the Corner 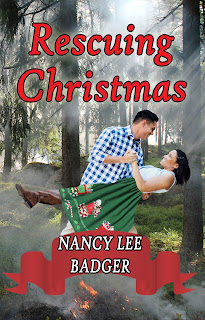 ...and my book was just released! The ebook's special pricing will end soon, so why not download a
copy today?

The basic premise is this...


Vermont is lovely this time of year, but where is the snow?

A Manhattan businessman in a Vermont ditch meets a muddy female firefighter. No snow since November might ruin the town’s annual fire department fundraiser. Can Elinor and Bradley stop their squabbling long enough to Rescue Christmas?


A lone figure stood on the roof where fire spewed toward the sky.
“Dear Lord!” Bradley had spotted Elinor. She stood encased in smoke, just below the roof’s peak.
A firefighter raced by him, heading in the other direction. “Sean! Elinor is in trouble. Help her!”
Ignoring Bradley’s plea, Sean disappeared beyond the fire truck. Was he coming back?
Bradley was running before he knew he had moved. He grabbed a helmet and a pair of fire-retardant gloves off the back of the firetruck. Racing to the side of the house where flames licked from an upstairs window, he called up to her. “Elinor! Are you all right?”
She didn’t answer and appeared to be bending over, choking on the smoke. He had to save her, but how? Cinders spewed from the open window, and he tripped over something laying in the grass. “A ladder! Hold on. I’m coming!”
He slapped the helmet on his head, then pulled on the gloves. Seizing the heavy aluminum ladder, he struggled with its weight, but managed to prop it against the house. It barely reached the roofline where he had last seen Elinor.
“Elinor! Walk to the ladder!”
Could she hear him? The smoke was choking him, but he would not leave without her. Elinor must not have spotted it, so he slipped his glasses in his coat pocket and raced up the ladder. The helmet slipped sideways and the gloves were cumbersome, but Elinor’s safety was paramount.
Reaching the top, heavy smoke drifted into his eyes and throat and his cough must have caught her attention. The flames from a hole in the roof had been replaced with smoke, so she jumped over the hole and grabbed the top of the tall ladder.


“What are you doing up here?” she asked.