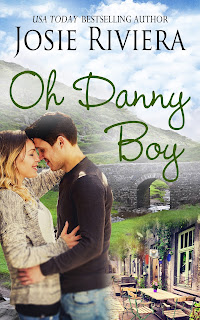 Josie Riviera stopped by to share a few intimate details about her new book. Oh Danny Boy is a sweet contemporary novel. Take it away, Josie!
Have you ever tried something you were afraid to try because it mattered so much to you? I did, when I started writing. Take the chance, everyone, and just do something you love. Because my daughter attends university in Ireland, I have had the opportunity to visit this beautiful country many times and wanted to capture the essence and flavor of one of my favorite places in the world.
Blurb for Oh Danny Boy:
This pot of gold could hold more than they bargained for…
Grand. Just grand. Clara Donovan’s failure to keep her brother from going off the rails—again—is a public spectacle. Including a handsome stranger who puts down his guitar case to help her talk Seamus down from Farthing’s tallest bridge.

Everything about Danny Brady reminds Clara how many times she swore she’ll never again be that pathetic, weak woman who got taken in by a good-looking man. Especially when, the next day, she walks into a new coffee shop in her little Irish town and discovers Danny’s secret.

Danny didn’t lie—technically—about his coffee shop chain. He’s just tired of women going after him for his wealth. Clara is a graceful, fiercely loyal, non-Irish Irish damsel in distress, a combination that tugs at his heart. A heart that’s spent its share of time in pieces.

Danny has never hesitated to go after what he wants, but melting Clara’s defenses will take more than hot tea and charm. He’ll have to prove he’s made of stronger stuff—even when her past threatens to tear her carefully reconstructed world to shreds.

“Seamus, don’t jump!” Clara Donovan heard her own cries, the shouts resounding through the misty night air. She raced across the sidewalk toward Farthing Bridge, her gaze riveted on a horror she didn’t want to believe. Her older brother Seamus sat on the edge of a tall bridge with his head slumped in his hands, a bottle of whiskey beside him. The arched stone bridge spanned the River Farthing, connecting the town to a once-popular marketplace.
No. It couldn’t be. Her breath burned in her chest as she took in gulps of dampness and drizzle. Don’t stop. Run faster.
When she reached the bridge, she elbowed through a group of late-night revelers. Several pointed up at Seamus. “He’s off the rails!” someone shouted.
Her brother seemed unaware of the gathering crowd. He swung his legs back and forth like an underwound metronome and stared into the ice-cold river below.
She shook off the image of him on her living room floor several days earlier. He’d been passed out drunk. Should she have phoned a treatment center? No. She could fix her brother’s problems. He simply needed encouragement, surrounded by his loving, supportive family.
Seamus. Gentle Seamus. Kind and fiery-haired, quick to temper, quicker to make amends. Her heart squeezed at the scruffy, dejected man he’d become since his wife had died.
Clara put her hands on her knees and took in calm, even breaths. Quickly, she assessed the corroded pedestrian catwalk leading to the top of the bridge, the skull and crossbones sign that warned Danger.
She stared upward at her sweet brother. “Dear saints in heaven, Seamus,” she whispered. “You promised me that you’d never drink again.”
She stuffed her wool gloves into her jacket pockets and bent to lace her weatherproof boots tighter. There was no time to dash around the river to the street that crossed the bridge, and she certainly wouldn’t ask anyone in the crowd to lend a hand.
She yanked off the “Danger” sign and threw it to the ground. That pressing feeling in her chest, like she was running out of air, slowed her movements. Dragging in another breath, she grasped the slippery wet handrails and stepped onto the bottom rung of the catwalk.
“Missus, are you trained for this?” a man from the crowd inquired.
She glanced around. The man stood a hairsbreadth away. He was tall with piercing blue eyes and carried a guitar case. His dark brown hair had a reddish tinge and his navy wool jacket strained against his athletic form.
“Thanks. I can manage on my own.”
Despite her refusal, she hesitated. Was she trained to climb to the top of a rusted bridge when she was crippled with fear and could hardly breathe? Umm, no. But she was desperate, and desperation made people do things they thought they could never do.
“I insist.” The man set his guitar case on the grass and stepped forward. “Who’s sitting on the top of the bridge?”
“My brother!”
“I’ll follow behind you. No worries.”
No worries. Dear saints in heaven, her brother was about to jump off a bridge.

More About the Author
Josie Riviera is a USA TODAY Bestselling Author of contemporary, inspirational, and historical sweet romances that read like Hallmark movies. She lives in the Charlotte, NC, area with her wonderfully supportive husband. They share their home with an adorable Shih Tzu who constantly needs grooming and live in an old house forever needing renovations.