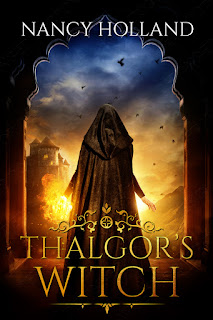 Author Nancy Holland stopped by to share intimate details about her life and her latest book. I always enjoy hosting other authors... especially ones with such a beautiful names!

Take it away, Nancy!

Thank you for having me on the blog today, Nancy. I’m so excited about the release of Thalgor’s Witch. Thalgor’s Witch, my first fantasy novel (and the first book in the Witch King series), is truly the book of my heart. I hope you all love Thalgor and Erwyn’s story as much as I do!

In a land of perpetual war and wandering, warrior Thalgor not only leads his people in battle, but keeps the hope alive that someday his displaced tribe can rebuild the kingdom that was lost to the treachery between witches and men. When he captures a beautiful witch, he knows he cannot trust her. But to succeed in his quest to find a new home and prevail over his enemies, he also knows he needs her.

Erwyn might be a slave and feared for her powers and precognition, but she doesn’t cower when confronted by the feared warrior. Nor does she act as expected. Thalgor’s kindness confuses her. His flashes of humor confound her. And the reaction he ignites in her body creates a longing that she cannot deny.

Neither anticipated falling in love. The stakes are high, but when Thalgor is mortally wounded, Erwyn realizes she must she must accept help from an unlikely source to save him.

Thalgor looked up and down the battlefield and saw what he had missed in his focus on finding the enemy leader.
Gurdek’s men were holding their own, but they made no headway against the enemy. The line of men on his left had broken. The enemy had gotten through in places and now battled some of their men from two sides. As the guards began to arrive from the camp, Gurdek sent them to close the broken line, but they were too few, too late.
Soon, Thalgor saw, the line would break entirely and they would be surrounded. Defeat was inevitable. His daughter would be born, live, and die some other man’s slave.
If they allowed Erwyn to live at all.
And he could do nothing to protect her. He could only continue to fight in the cold, mud and rain, killing and grieving now with equal passion and equal despair.
The enemy’s leader made his way toward him.Thalgor doubted killing him would do more now than slow the tide of defeat.
But kill him he would.
The two leaders raised swords against each other. Their men moved away from where they stood, some out of deference to their strength and valor, some simply out of fear.
The enemy glanced away for just a moment to appraise his men’s advantage.
Now. Thalgor brought his sword down hard, but it struck only his opponent’s shield, as his sword stuck only Thalgor’s.
They fought on that way, blow for blow, until Thalgor’s arms grew numb, his breath hot and tight in his chest.
Just when he began to doubt he could ever kill this man who would soon take from him all he loved, a stir ran through the warriors on all sides. Both leaders froze and looked as their men did at a rocky outcropping just to one side of the battlefield.
A man stood on the highest point in a shimmering silver robe. The Witch King.
Beside him stood Erwyn. 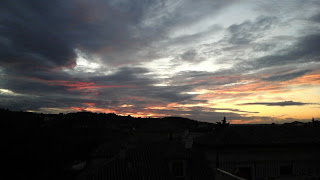 More About the Author
A former professor and finalist in the Romance Writers of America’s Golden Heart© contest, Nancy Holland recently began to live her dream as a full-time writer. She draws on her vision of what human existence can be and the creative wellsprings of her mind to create characters who live in a fantasy world, but are as real as the people you see every day. Her heroes and heroines refuse to give up on themselves, struggle to improve their lives, and learn to trust each other. Connect with Nancy here: