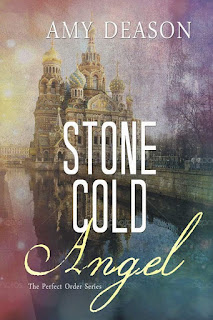 Amy Deason stopped by to share her latest release! Stone Cold Angel is the second book in The Perfect Order series. A suspenseful romance series that plunges her readers in a world of mystery, secrets, lies, and death.

BOOK BLURB:
Be Careful Who You Trust . . .
Cadence Montgomery had it all. A beautiful home, a loving father, a scholarship to one of the most prestigious music schools in the country. But when her father, a nuclear physicist, disappears into the vast regions of Russia without a trace, everything comes to a crashing halt. Tired of waiting for answers that never come, she decides to take matters into her own hands and sets forth on a dangerous journey to find him. Soon she finds herself in the midst of something than she could ever imagine. The only person standing between her and death is the most mysterious and seductive man she'd ever encountered.
Nikolas Kozlov is a killer . . . Not only in his work but also in the bedroom. As a part of an extreme undercover organization known simply as The Perfect Order, he has spent many years honing his elite skills in the art of combat, disguise, and seduction. Now he must return to his own country in search of the one woman that may hold the key to stopping a madman set on world domination. But his expectations of a spoiled American princess are blown apart as he realizes there is more to Cadence than meets the eye.

With millions of lives on the line and time running out, Nikolas and Cadence must find the answers they need to stop the international terrorist before it's too late. But as they make their way across the country, they struggle to fight not only against the killers hunting them at every turn but also against the electrifying attraction growing between them. Once the shocking truth is laid bare, only one question remains. Can they survive the impossible odds . . . and each other?

STONE COLD ANGEL EXCERPT:
The man leaning toward her was absolutely dangerous.
And totally gorgeous. Cadence felt these things as clearly as she felt the pull on her arms and the chill in the air. As clear as the immense ache in her head and face.
God, it felt as though her brain was being ripped apart.
It hadn’t helped thrashing around trying to free herself from the chair. Any more than it had to try and nail the men with the tire iron when they’d finally opened the trunk. She thought she’d managed to hit one of them but she couldn’t be sure. The last thing she remembered was a fist coming at her followed by a brief flash of pain and darkness.
When she woke up, she was in this place, tied to a chair. A large man encased in an expensive suit stood over her.
With wide shoulders, a brown buzz cut, and piercing green eyes, he was attractive in a cold sort of way. But when he smiled, a chill ran through her, spearing her heart. His words were friendly and polite but when she refused to answer his questions, he’d become enraged and she tensed herself for another blow.
But he hadn’t hit her. Instead, he’d pulled out a syringe and injected her with something. Whatever it was had knocked her out quickly and with a lot less pain than a fist to the face. She could still feel the light sting on the side of her neck.
Now here she was again, with another creep.
Shifting uncomfortably, she tried to shrink into herself and escape the dark, penetrating eyes of this handsome man but there was nowhere for her to go. She was strapped to the chair, unable to do more than look away. But the intensity in the man’s eyes kept her from even doing that.
Frozen in place, she could only watch as he leaned in, closing the space between them, his lips scant inches from hers. Terror accelerated her heart, making it slam against her ribs painfully.
“I’m here to help you but you have to do exactly what I say,” he murmured, his voice soft and husky.
His breath had been warm and sweet, washing over her face and it would have stolen her breath had she not been holding it.
She was afraid, no doubt about it, but she wasn’t stupid and she’d been through this once before. She knew what he wanted and she wasn’t willing to play along.

ANGEL IN THE SHADOWS

SIZZLE IN THE STONE: A Soul Mate Christmas Collection 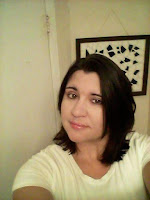 I have been reading since I was three years and I have had a voracious appetite for reading ever since.  Everything I could get my hands on, I read. I read so much and so fast that I had teachers doubting me until they finally realized that I truly was reading ALL of those books. 😊

I remember sitting at my grandma's house when I was 7 or 8 and writing silly little stories that my grandma would read aloud and hang on the refrigerator. She would laugh or smile as she read them and it was then I knew I wanted to write.

I love everything about books. The feel of them in my hand. The smell of the pages. The places they can take you. The way they help you temporarily escape everyday life, and the way they open doors to new experiences and people.

I currently live in NW Arkansas with my wonderful husband, three children, and our shih tzu. I enjoy all kinds of activities when time will allow it. (Not often 😏)  But if I'm not working, you can find me writing, reading, or spending time with my family. Connect with Amy here:  WEBSITE     FACEBOOK

Email ThisBlogThis!Share to TwitterShare to FacebookShare to Pinterest
Labels: Amy deason, Angel in the shadows, on writing, on writing paranormal, Stone Cold Angel