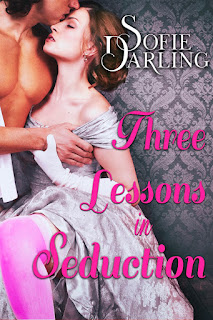 Please welcome author Sofie Darling who stopped by to talk about her latest release. Take it away, Sofie!

Three Lessons in Seduction centers around a married couple, Nick and Mariana, ten years after a very public scandal ruined their marriage. Initially, it was the second installment of my Shadows and Silk series, with book “one” already written. However, a keen-eyed critique partner told me I should flip the books around and explained why. She was absolutely correct. So, I stuck the other book in a drawer and started writing Three Lessons. What happened to the other book? It’s Tempted by the Viscount and releases on June 27th. J (It tells the story of Olivia, Mariana’s twin sister, and the man she can’t seem to keep out of her life!)

Book Blurb from Three Lessons in Seduction
Lord Nicholas Asquith needs his wife. Too bad he broke her heart ten years ago.

When Mariana catches the eye of the man at the center of an assassination plot, Nick puts aside their painful past and enlists her to obtain information by any means necessary, even if it means seducing the enemy agent.

Even if the thought makes his blood boil.

Mariana has a chance to best Nick at his own game. It’s an opportunity she can’t resist, even as, increasingly, she wants nothing more than to seduce her Bool own husband . . .

Excerpt
"A girl like you is a girl one could marry,” he murmured. They were heedless and dangerous words that fell from his lips, and he couldn’t understand why he spoke them.
“A girl like me?”
“You.”
“One could marry?”
“I.”
“Careful,” she whispered into the space between their lips. It was the only space that mattered in the universe. “I might hold you to such words.”
“I might hope you do.”
Again, words fell from his mouth of their own accord, and he’d proposed to her. There had been no biting it back.
And he hadn’t wanted to.
At least, not for another five seconds.
He’d proposed to Lady Mariana Montfort, a girl he didn’t know.
That wasn’t precisely true.
In the ways that mattered, he knew her.

Bio
Sofie spent much of her twenties raising two boys and reading every book she could get her hands on. Once she realized that she was no longer satisfied with simply reading the books she loved, that she must write them, too, she decided to finish her degree and embark on a writing career. Mr. Darling and the boys gave her their wholehearted blessing. When she’s not writing heroes who make her swoon, she runs a marathon in a different state every year, visits crumbling medieval castles whenever she gets a chance, and enjoys a slightly codependent relationship with her beagle, Bosco.