The Prince's Pea by Caroline Lee 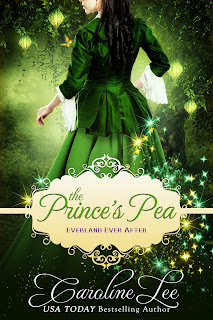 USA Today bestselling author Caroline Lee stopped by to share an interesting book that I found out about and just had to read. I love the cover, the premise, and her books. The Prince’s Pea is the book, released August 23rd. Caroline, please tell us more!

This Pea won’t fit under the mattress…but the truth will!

Micah grew up in the Zapato orphanage, and is proud to take over Abuelo Zapato’s role of providing for the family—the children that have become his siblings—in Everland’s leather goods shop. Since being scarred in one of his brother-in-law’s gunfights, he knows they’re the only family he’ll ever have. And he’s at peace with that…until fate—or the Guild of Godmothers—drops two unexpected females in his path.

When his old childhood friend Penelope—Pea—shows up just in time to save him from a gruesome death, Micah is smitten. And when he sees her cuddling the new baby orphan, he’s in love.

But Pea isn’t in Everland on a whim; she’s there on a mission regarding Micah’s past, and refuses to tell him the truth. That secret is going to tear them apart, unless they get some help from a particularly dopey Godmother.

And that's when everything goes wrong…

Excerpt:
They were going to hang a man.
Penelope heard the news as soon as she stepped off the train at the dirty little station in Dilbert, Wyoming. How could she not? It seemed to be all anyone was talking about, and besides, there was a man literally yelling as he told a gathered group of rough-looking men how it had taken him and three buddies to subdue the poor victim.
“Poor victim” because he obviously wasn’t whom they thought.
According to the story being told—yelled—as Penelope walked about to stretch her legs, a group of miners had recognized Draven and had attacked him. They’d assumed the feared bounty hunter was in town to take down one of them—she wondered why no one else had stopped to question why they’d assumed that, but decided it wasn’t part of her mission, and thus she could ignore it. So they’d waited until the man had ordered his third whiskey at Dilbert’s disgusting-looking saloon, and four of them had jumped him. Then they bashed him over the head.
And now they were planning on lynching him. Right now, in fact.
Didn’t this town have a sheriff? Penelope tsked in irritation, over the fact she seemed to be the only level-headed person around here.
Draven? Brought down in a bar by a rifle butt to the back of his head? Preposterous! Plus, Penelope knew for a fact, as of last week, the man in question was out in Utah, following up on a lucrative bounty out there. There’s no way he could’ve made it to Dilbert this quickly, and no way he would’ve let his guard down long enough to be captured by a lynch mob.
A lynch mob who had just finished celebrating at the same sordid saloon, judging from the crowd of men pouring out into the street. And—oh dear—the one in the front was holding a rope already tied into a noose.
Well. Penelope sighed. It looked like it was up to her to do something about this. Especially since she had a horrible feeling about who this mob would really be hanging.
She flagged down the porter and requested her luggage. “I know this isn’t my destination, sir. I have just discovered I have rather urgent business here, which I assume will take up enough of my time so as to prevent me from being on the train when it departs.”
When he continued to complain about having to fetch her luggage, she drew herself up to her not-inconsequential height and gave up on impressing him with her manners. “Get out of my way, then.”
All she’d brought on this trip was a large valise and her rifle case, and she could easily fetch that herself. The longer she spent arguing with this man, the more time the mob will have to kill the other man.
Sure enough, by the time she’d climbed down once more, holding her two pieces of luggage and scanning the station platform with practiced eyes, almost ten minutes had passed since she’d first heard the news. Dilbert’s main street was almost empty, and the few citizens she did see were hurrying towards the western edge of town.
Blast! That’s where the lynch mob would be then.
Behind her, the train whistled as it chuffed its way out of town. Penelope straightened her shoulders, hefted her bags, and hurried westward, praying she’d still make it in time.
The mob had gathered just outside of Dilbert. Of course, this far in the back, it was hard to call it a mob. Here were the mothers and curious children, the shopkeepers and the prostitutes. Here, at the rear of the crowd, were the people who wanted to know what was going on but didn’t want to be involved. They weren’t the dangerous ones.
By lifting herself up on the toes of her very elegant—and increasingly dirty—boots, she was able to see the rest of the crowd, which stretched up to the trunk of a large tree. How unusual, to see a tree so large, this close to town. Perhaps it was a favorite picnic spot…or the local hanging tree.
Knowing what she would find when she reached the tree, Penelope began to elbow her way forward, not bothering with niceties. She only prayed she wouldn’t be too late.
Oh, thank God. She breathed the silent praise when she reached the front of the group of casual bystanders, and the rear of the angry mob. Because these men in front of her? Definitely angry mob. And—per her prayer to the Almighty—they hadn’t committed their offense yet. For the moment, they seemed content to shake their impromptu weapons and yell insults about Draven, one of the West’s most feared bounty hunters.
Under the tree’s largest limb stood a wagon hooked up to a skittish-looking horse, whose eyes rolled fearfully at the sight of so many angry men wielding pitchforks and rifles and rope. There was an unsavory man holding onto its reins, but he looked ready to yank on its head at any moment. And when he did, that wagon would lumber forward, severely inconveniencing the man with the bound hands standing in the rear of it, the noose around his neck also tied to the tree limb above him.
The man who, even now, scanned the crowd with those gorgeous so-dark-they-were-almost-black eyes she remembered so well. Did he look confused? Frantic? Scared? It was hard to tell from this distance, but she would know him anywhere.
It was Micah. It had to be. He looked too much like that serious little boy from so long ago. She’d spent months searching for him, and it was cruel to find him here, like this. 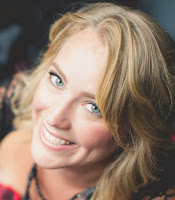 More About Author Caroline Lee
USA Today bestselling author Caroline Lee has been reading romance for so long that her fourth-grade teacher used to make her cover her books with paper jackets. But it wasn't until she (mostly) grew up that she realized she could WRITE it too. So she did.
Caroline is living her own little Happily Ever After in NC with her husband, sons, and brand-new daughter, Princess Wiggles. And while she doesn't so much "suffer" from Pittakionophobia a
s think all you people who enjoy touching Band-Aids and stickers are the real weirdos, she does adore rodents, and never met a wine she didn't like. Caroline was named Time Magazine's Person of the Year in 2006 and is really quite funny in person. Promise. Connect with Caroline Lee here:

Posted by Nancy Lee Badger at 9:00 AM