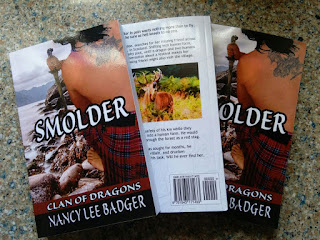 My proof copies recently arrived and hubby and I have been reading through them, catching and correcting a few typos, and hoping that they are ready for release day on March 13th. The ebook of SMOLDER, the third book in my Clan of Dragons series, is available for pre-order at Amazon. A big Thank You to those of you who have pre-ordered it!

To those of you not familiar with my series,
here is an excerpt from SMOLDER:


Fiona straightened her server’s attire, as well as her cap, and made her way into the tavern. The dining hall had emptied, somewhat, but Dougal leaned against the counter and glared at her. Had he been waiting for her all this time? When he marched in her direction, with one hand on the pommel of his sheathed sword, she swallowed.
He was magnificent, with his long hair in an unruly tumble over his shoulders, and his dark blue eyes glaring at her. His wide shoulders moved in a fluid motion, as if bone, flesh, and muscles worked in harmony. Even his knees were muscular, and she wished he was still naked. He was the most beautiful creature she had ever beheld. As he walked closer, he didn’t say a word, but glowered at her.
“I need to find your brother, Evan.” Before she could explain, he cupped her chin, and pressed his lips to hers. His hand circled her waist, and he drew her body close. Surrounded by his heat, and the scents of human musk and smoldering cinders, Fiona melted beneath his kiss. When he lifted his mouth mere inches away, she sighed, while he sniffed her.
“You taste delicious, lass, like apples and spice. I wish to explore every inch of your lovely form, but why be you looking for Evan? I can give you anything you desire, if you only ask.”
What she desired was to find her friend Cliona, after she gave Evan the good news, but her bones were as shifting as the sands, and she took a moment to formulate a sentence.
“Sir, I need to find Evan. I have news. He might wish to tell you that your niece or nephew will soon enter the world, but we should leave that up to him, aye?”
Dougal released her, and stepped back. “What? When? Who said?”
“Vika has asked me to bring her husband to her. She be in great pain. Can you point me in his direction?”
“I feared the babe would come too soon. If not for this silly celebration, Vika would be safe in her cave, in her own bed, not surrounded by strangers.” He turned away.
In her cave?
As he exited the tavern, she followed, quickening her stride to keep up with his long legs and determined pace. She could only assume he could fly faster, but she doubted he’d reveal himself to the villagers by sprouting wings. They rounded the fire pit, and circled the crowd. Most of the humans sounded gay and happy, or in their cups.
Cliona had warned her about humans and their spirits. Ale flowed freely in the tavern, but whisky was the true demon. She couldn’t imagine Dougal inebriated, but why had he kissed her so blatantly? What else might he do, if she did not keep her distance?
A shiver ran along her spine, as she hurried after him. He paused at a vendor’s cart, and the man pointed down the lane. He took off, nearly at a run, and Fiona gasped. She settled a hand on her middle and followed until he entered the blacksmith shop.
She stopped just outside the door, bent over at the waist, and tried to breathe. When two brown leather boots appeared, she straightened. The human in front of her was Dougal’s twin except for the coppery hair and amber eyes. When they flashed like molten flames, she swallowed.
Another dragon. 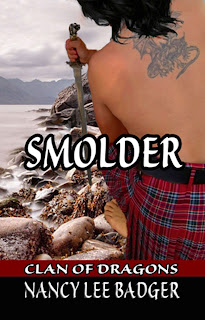