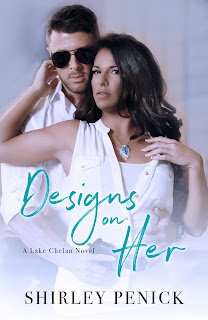 I invited Shirley Penick to stop by and share intimate details about her life and her new book. Designs on Her was released on March 13th. Take it away, Shirley!

I wanted to write a series about a fictional town in the Lake Chelan area in eastern Washington state. I planned to visit the area so I would have a bit more in-depth knowledge of the area. I had the reservations booked well in advance and when it came time to visit, there were terrible forest fires in the area. They weren’t bad enough to keep me away, but as I took the ferry uplake from Chelan to Stehekin past the area I planned for my town to be, I watched the helicopters come down to the lake and fill up with water. They were huge helicopters but as they flew into the smoke they became tiny dots in the cloud of smoke, which really put the fire into perspective.

I knew I had to write a story about the fires, the ferry had a poster about all the fires they had experienced over the last 30 plus years. So, I realized this was not a once in a while occurrence but was fairly frequent, so ignoring the fires was not an option. I had already planned on having a semi-reclusive jewelry designer living up on the mountain, so what better way for her to meet the man of her dreams than to have him come force her evacuation. And the story was born! I have many more stories planned for the area and my fictional town, maybe a dozen total.

Book Blurb: Designs on Her
Kristen is happy designing her jewelry on her mountain, away from all the hustle of humanity. It’s just her and her faithful dog. Until a forest fire forces her to evacuate. Coming down the mountain casts her into the town problems and sucks her into all the chaos of opening an art gallery.

Police officer Nolan is tasked with the evacuation of the few residents on the mountain. Getting this crazy but beautiful jewelry designer out of harm’s way is not the easiest thing he’s ever done. He manages to get her to safety and then he gets caught in her gallery plans. His life may never be the same.

Nolan turned his back on his talent when his sister was murdered. Caught back up in the art world, he’s torn between creating and the curse his art seems to have on those he loves.

Excerpt
Nolan just couldn’t resist driving by Kristen’s new place. It was like looking at a car wreck—he just had to see whatever he could see. He had been going by every day while on patrol. Did this street need patrolling this often? Hell no, it was a quiet street. It did have some businesses on it, but nothing crazy. Except for his favorite crazy woman—who was currently attempting to carry a huge box into her home. She would pick it up and walk three steps and then put it back down. Couldn’t the woman ask for help, ever?
Nolan parked his patrol car in front of her house, called in that he’d be out of touch for a few minutes, and went over to where she’d moved the box another three steps.
“Um, do you want some help?”
She jumped. “Oh, you scared me. I was channeling my strength.”
“Wouldn’t it be easier to ask for some help?”
“I tried that, Mister Smarty Pants, and everyone was busy. They had a problem down at the amusement park with the carousel and everyone is over there fixing it. One of the animals came loose, or a foot fell off, or something. Anyway, Chris and Terry and Greg are all over there fixing it. Kyle is showing a house. Mary Ann is at the school this morning, doing her monthly volunteer thing. And I really didn’t think I should ask my pregnant sister.” Her voice got shriller with each word.
Nolan held up his hands in surrender. “Sorry, sorry, I jumped to a false conclusion. Please forgive me. And here, let me give you a hand.”
“Gladly. This damn thing is heavier than it looked when I ordered it.”
“And it’s bulky which makes the heaviness even worse.”
“Thanks, Einstein. I had no idea.” Kristen snarked.
“Woah, you’re having a bit of a bad day aren’t you.”
“Again, another brilliant observation. And if you say one word about PMS, I will punch you right in the nose.”
“That wouldn’t be a wise move. In case you haven’t noticed, I have my uniform on and that would be assaulting an officer.”
Kristen glared daggers at him and marched into the building. Damn, now he’d really done it. “Kristen wait, I’m sorry. How can I help? Come on, I really am sorry, give the poor stupid man a break, please. Pretty please, with sugar on top.” 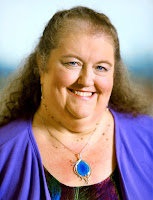 Tell us more About you!
I am a former techy turned writer. I am writing a small town contemporary romance series based in a fictional town on Lake Chelan in eastern Washington. I have lived in Colorado, Hawaii and currently Washington. I’m a member of RWA (Romance Writers of America) and the local chapters GSRWA (Greater Seattle RWA) and Eastside RWA.

I am a mother of two grown children and the grandmother of two adorable grand-daughters. I started reading at a young age with the Nancy Drew mysteries and have continued to be an avid reader. I primarily read romance in most of the genres.

My favorite past-time is playing with my grand-daughters. I have been a carnation grower’s worker, a trap club puller, a pizza hut waitress, a software engineer, an international trainer and a business program manager. And for something really unusual I once had a raccoon as a pet. Connect with me here:

Email ThisBlogThis!Share to TwitterShare to FacebookShare to Pinterest
Labels: book blast, Designs on Her, Kindle, on writing romance, Shirley Penick