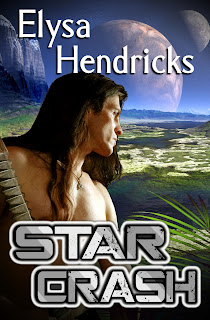 Elysa Hendricks stopped by to share some intimate details about her and her new book.

STAR CRASH is a sexy, sci-fi romance. Please tell my readers a little bit about your book.

Elysa- Did you ever wonder what it would be like if we humans weren’t the reigning species on the planet? That thought occurred to me one day while I was at the zoo watching the gorillas and they were watching me back. What did they think about us?  What if we were the ones in the cage? At that point memories of the movie Planet of the Apes and the Twilight Zone episode People Are Alike All Over starring Roddy McDowell washed over me. Combine those with my love of sci-fi and the idea for STAR CRASH was born.

Elysa- While STAR CRASH falls firmly in the sci-fi romance genre, I also write romances set in the Old West, contemporary romances set small town America, as well as fantasy romances set in an alternate universe.  The storyline and character determine the sub-genre of the romance.

Elysa- Christmas Eve 1989 I sat down to write a short, contemporary romance. When my heroine turned out to be a winged, telepathic alien who stows away on a passing space ship, I realized I enjoyed writing about different worlds and times.

Elysa- Fast forward to 1993. I finished the first draft of my first book in three months, then I spent the next three years learning how to write. In that time I also completed two more books, western historical romances. I sold my third completed manuscript in 1999 to Hardshell Word Factory, one of the first digital publishing houses. After that I sold five titles to ImaJinn Books and three titles to Dorchester Publishing. When Dorchester went out of business I took back my rights and reissued STAR CRASH, STAR RAIDERS and THE SWORD AND THE PEN. I also reissued the western historical romance HER WILD TEXAS HEART (originally titled RAWHIDE SURRENDER,) and began my journey into self-publishing. Since 2011 I’ve released an additional nine full length novels and seven short stories.

Elysa- An unsung song is never heard. An unpublished book is never read. I write because the characters in my head and heart need their stories to be told, to be read. In order for that to happen those stories need to be published.

Elysa- One line from my very first rejection has become a running joke in my family. Every time we watch a movie or TV show with an unbelievable storyline or plot twist, someone pipes up with the line “too contrived, with too many unlikely events.”

Nancy- Please Share three fun facts about you that most people don’t know.
1) I co-host a community radio show – wscqfm.com
2) I’m an Italian who dislikes most Italian food.
3) I think that the best sporting event is – one that’s over.

Elysa- I’m working on a romance trilogy set on an island off the Gulf coast of Florida about three sisters, as well as several more sci-fi romances.

BOOK BLURB
When Planet of the Apes meets Star Trek what's a girl to do?

After recon pilot Cora Daniels crash lands on an alien planet she finds herself a prisoner of the Flock: a race of birdlike humanoids. Trapped in their zoo she discovers they intend her to mate. To breed. To be part of their human herd.

She's placed in a cage with a man - a powerful, virile man, but not just any man - Alexander. Was he her lost love, who'd disappeared so long ago? Here he was: naked, glistening, a warrior trained by the Flock to fight for their amusement. How could the brilliant man, the tender lover she remember have become this animal born to dominate and destroy? Was he a pawn of the Flock or would their flight to freedom be a long-sought reunion?

Excerpt
"What mad scheme are you planning?"

Alex's tone reminded Cora of all the times he'd asked that question while they were at the academy. Now, as then, she knew he would try to talk her out of doing anything dangerous. He'd always been the cautious one, looking before he leaped and weighing the odds of success before he tried anything. His careful study of the facts would have served him well as a First Contact diplomat. She on the other hand preferred to gamble. Pilots had to be willing to take calculated risks. And now as then, she'd prevail. She had to. Their lives depended on it. In this she couldn't give him a choice. Couldn't let him retain control.

She led him into the chamber and sat with him on the pallet. "We need to get out of here, to escape. You can't be here for them to take you tomorrow."

"I've told you, escape is impossible."

MORE ABOUT THE AUTHOR
Elysa Hendricks is 5'6" tall. She has curly hair and brown eyes. She's an author, a wife, a mother and a daughter. Everything else is subject to change without notice. 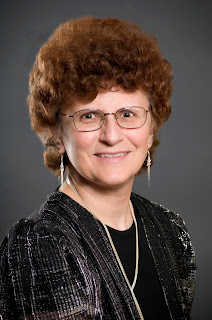 While living in north east Illinois she helped found the Windy City, and Futuristic, Fantasy & Paranormal chapters of Romance Writers of America,. She's taught workshops on writing at writer’s conferences and at community colleges.

Recently relocated to sunny Florida she and her husband Vern are volunteer staff at the new Sun City Center community radio station WSCQ-FM 96.3.  You can listen to her Live on Thursday mornings from 9-11am EST at http://wscqfm.com by clicking on the Listen "Live" button at the top of the page.

Because for "real life" her motto is: Boring is good, excitement is vastly overrated, she saves the adventures for the characters in her books.