Would you like to win this Scottish Window sticker? First, let me tell you about my latest Scottish time travel romance. My Hunted Highlander takes place in two distinct locations. Can a location be a character in a romance novel? YES!

The fictitious New England Highland Games are located in the present-day White Mountains of New Hampshire. The mountains in September, the oddly changing weather between this place and the wintry weather of the other locale, give my hero and heroine many problems to overcome, while falling in love.

The North Sea plays a vital part, as my hero starts the book by being rescued by pirates. When he escapes the Scottish pirates' hidden island, and heads to the mainland, the snow begins to fall. Keep warm with My Hunted Highlander!

Here is an excerpt from My Hunted Highlander, a full-length novel available in ebook & print:

The small craft slipped into the surf. Niall jumped into the boat, and helped Blair climb in. Waves thundered nearby, and the memory of Blair’s crushed skiff made him set the oars into motion. Thrusting them into the turbulent sea, they rode over the waves, until the boat entered calmer water. Keegan unfurled the sail, and Blair worked the rudder.
“What can I do?” Niall asked, after pulling in the oars, feeling slightly useless.
“Take over when I tire. Right now, my adrenaline is making my blood race!”
“Adrenel-what?”
“Never mind. No time to explain. We have to get away, in case we’re followed.” She turned to her son. “Keegan, hide under that canvas and get some sleep.”
Keegan nodded, then gazed up at her. “What happened? Why do we no’ take The Black Thistle?”
She sighed. How much of their problem would she share with the lad? Though small, Keegan was smart. He trusted his mother. Niall did, as well.
“Raven has mutinied against me. He tried to kill Balfour.”
“Nay, I canno’ believe that.”
“He tried to slay yer mother, as well, lad,” Niall added, “so ‘twas time to go.”
The lad’s eyes widened, and he swallowed hard, but did not say another word. He had not burst into tears, even though they had left behind everything, and everyone, he knew. Once Keegan was safely secured beneath the tented canvas, Niall sat beside Blair, with the rudder between them.
“He is a brave lad. Just like his mother.”
She smiled, but the smile did not reach her eyes. “Yes, but he’s a handful. I could not have left without him.”
“Understandable, Blair.”
She visibly bristled, then her shoulders sagged. “Right. I am no longer the captain of a Scottish pirate ship. Now, I’m nothing.”
“Nay, lass. Ye be more than a title. Yer a mother, a lover, and I wish to know more.”
She smiled sheepishly. When her cheeks darkened beneath the moonlight, she cupped his cheek. “You know more about me, than most men.”


“Aye, we have shared our bodies, yet I yearn to learn more about the woman.” 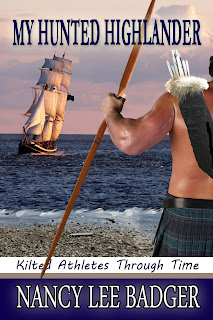