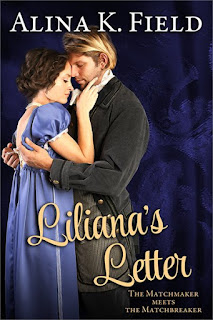 Alina K. Field stopped by to share a few intimate details about her life, and to discuss her latest book.

Liliana’s Letter is a Regency novella on pre-order at Amazon with a release date of October 15th. Please tell my readers a little bit about your book.

Alina- Liliana’s Letter is a prequel to my novel, Bella’s Band. The hero in Bella’s Band had a newlywed uncle, and this is the story of how that widowed uncle found his new baroness. It was great fun to write because the characters are a bit older than the usual Regency misses and lords.

Alina- Liliana’s Letter is my third published Regency story. I have a four-book Regency series in the works, but I also have a bunch of completed contemporary works, including a Valentine’s Day story in my local RWA chapter’s anthology. When my Regency novella Rosalyn’s Ring was published in 2013, I slipped the contemporaries “under the bed”. One of these days I’ll pull them out and finish editing!

Alina- No, but I had one pretty bad experience pitching a secret baby story to a male editor who was as hostile to the concept as my eighth grade teacher, Sister Cyprian, would have been! Amazingly, he still asked for a full, but since I believe that cordiality and respect in this business should always be a two-way street, I passed.

Alina- I’m a morning writer and try to push through a first draft as quickly as possible, though it usually takes two to three months. It’s the part I dislike most. I’m not a plotter and those first drafts are really messy. The part I love is the editing.
Nancy- Are you a member of any writing organizations and, if so, have they helped?

Alina- I belong to four Romance Writers of America chapters, two of them local, East Valley Authors and Orange County Chapter RWA, and two online, Celtic Hearts and the Beau Monde. I’ve learned—and continue to learn—so much from all the members, and being active has given me access to a great network of writers and publishing professionals.

Alina- Keep writing. Keep learning craft. Keep reading. Be kind and professional at all times, whether you’re giving or receiving criticism. All of that will pay off, probably when and how you least expect it. Remember that one door closing doesn’t mean all the doors will stay shut forever. Most of all, remember that you’re the only one who can tell your story—have fun writing it!

1) I once sang in Carnegie Hall (on the stage, not in the audience!)
2) In college, my only sport was fencing.
3) As an Air Force brat I lived in six different places before I entered first grade.

Alina- I’m going back to finish the draft of the last book in my four book Regency Series, and then I’m going into editing mode for the series.

BOOK BLURB from The Matchmaker

Lord Grigsby wants nothing more than to retreat to his study, but a promise to his long-dead sister has forced him back into society to broker the marriage of his nephew to the heiress whose money can save the young man’s earldom. If only the young lady’s starchy hired companion would move out of the way.

Hired to launch an heiress’s society debut, seemingly straitlaced spinster Liliana Ashford’s future as a professional chaperone depends on the girl’s successful marriage. But Liliana had her own close encounter with a scoundrel years ago, and she won’t let her charge be forced into marriage to the same kind of rogue, no matter how hard the man’s widowed uncle tries to woo Liliana around to the match.

Secrets and a Scandalous Murder

A shadow from Liliana’s past appears bearing an unfortunate letter she wrote long ago, and then the earl is murdered, evoking the scandal of the season. While she scrambles to make a respectable match for her charge before her own past can be exposed, Grigsby sets about finding his nephew’s killer—and Liliana’s secrets.

The woman at Grigsby's side was like a lightning rod expecting a bolt to strike, or like a Fury about to deliver one. This close, scent wafted from her, roses and lemon, he'd guess. Tall, straight, and stiff, underneath her self-possession was a temper ready to unleash. He would bet on it.
Intriguing. He dared to poke her ire. "You clearly don't approve of the match. Do you intend to openly oppose it?"
Her head whipped around, and she glared. "It's not for me to approve or disapprove. Katie—Miss Mercer—will decide."
Passion flashed in her eyes, sending an answering spark through him. She was magnificent—though so very mistaken.    "Really? Then her father is more liberal than I expected."
She looked him over more closely. "What do you know of this matter?"
I might ask you the same question. Her tone had been stiff, like the crystallized dome covering bubbling lava. He fixed her with his sternest glare, not entirely surprised at her cheek.
His glower didn't impress her. She lifted her shoulders higher. Stood a little taller, proud, lovely, and filled with indignation.
Quite righteous indignation. He gave into an unmanly sigh, truly weary of his responsibility for Thomas. "I know a good deal, Miss Ashford. I have been negotiating for these nuptials. The arrangement is my doing as much as Mr. Mercer's. Much more than it is my nephew's. He is probably the least culpable, except for his abominable behavior."
She clenched her hands tightly. "I see."
"Thomas's mother was my older sister. I made a promise to her that I would look after him." Her gaze softened, and she bit her lip in a way that made him want to taste the part that she was nipping.
And where had that thought come from?
"And your nephew needs money and an heir."
He nodded. As a woman of the ton, of course she would understand how marriage worked. Marriage wasn’t about love, or the bride’s approval, or a plump lower lip that begged to be kissed.
"He needs money most of all. He has a younger brother in the army who would make a far more dutiful earl."
He covered his mouth with his hand. The words had rolled out, shocking him. He rarely spoke this frankly with any woman.
Very well, he never spoke this frankly with any woman.
She released a soft breath. "And there is the matter of the ore."
His mouth gaped and he quickly closed it. Mr. Mercer had shared that information? Well. "That part of the county is rich with newly discovered veins of iron."
That information brought her up straighter. She looked away, gazing intently at a thick, dark spot of foliage, making him want to pry into that sharp mind.
"I see,” she said. “I believe we should go back in now."
Not yet. He tucked her hand over his arm but did not move. "I had hoped we were not finished talking. I've learned your Christian name is Liliana, but I don't know anything else about you. I don’t know where you're from or anything about your family."
He sensed her bristling, and waited for some reaction, perhaps a slap, verbal, or, with a woman of her passion, even a physical one. Strictly speaking, he was importuning her, and damn if he wasn't enjoying the nerves rippling through her. 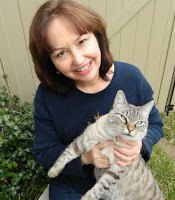 Award winning author Alina K. Field earned a Bachelor of Arts Degree in English and German literature, but she found her true interest in reading and writing romance. She shares a midcentury home with her husband and a blue-eyed cat who conned his way in for dinner one day and decided the food was too good to leave.

She is the author of the 2014 Book Buyer’s Best winner in the novella category, Rosalyn’s Ring, and a 2015 RONE Award finalist, Bella’s Band, both Soul Mate Publishing releases.