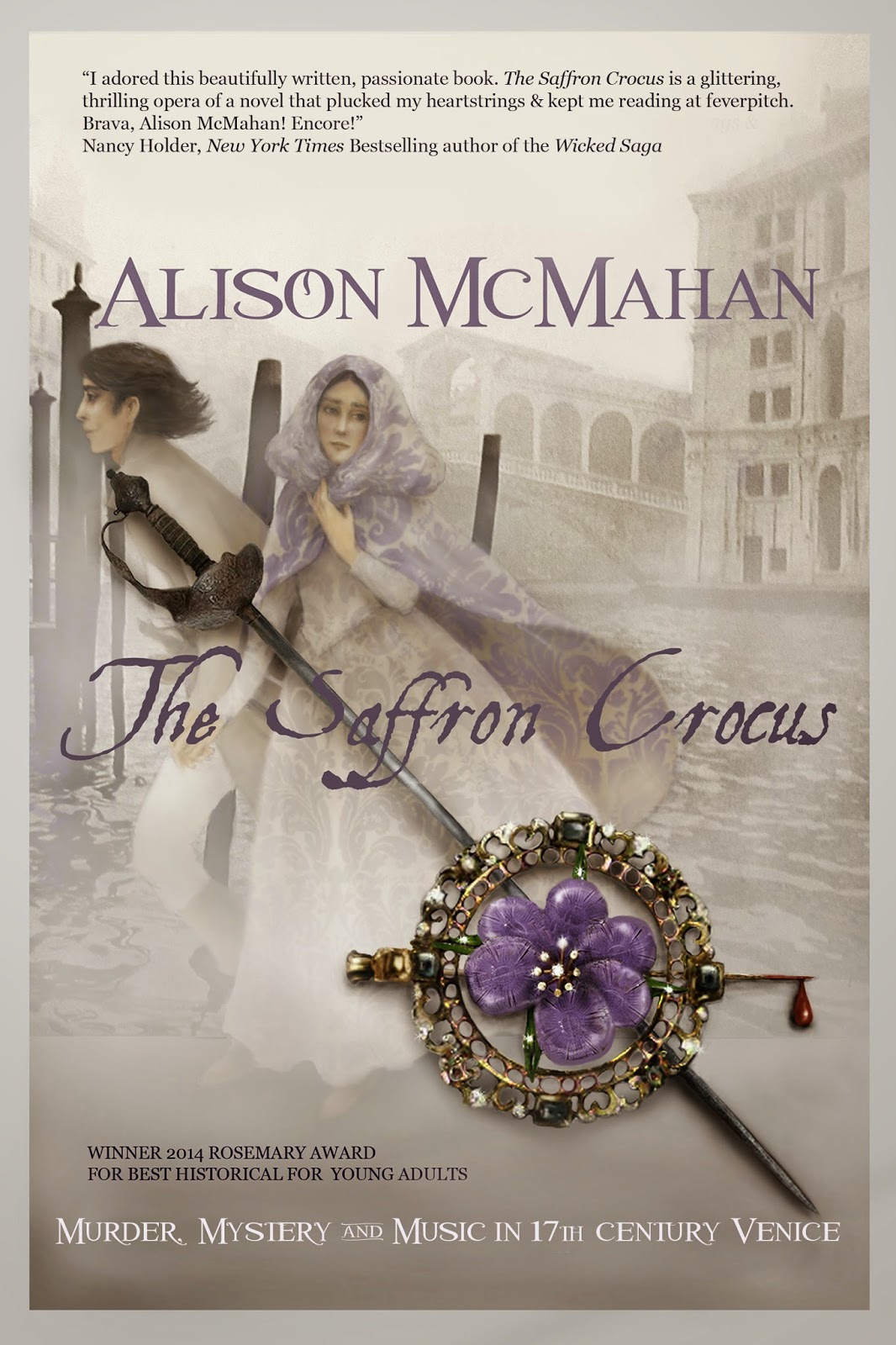 Author Alison McMahan stopped by to share insights into the world of writing romance. Her book, The Saffron Crocus, a Historical Mystery and Romance for Young Adults, was released December 13th.

Nancy: Please tell my readers a little bit about your book.

Alison: The story is set in Venice in 1643, which was ten years after the Black Plague had decimated Venice. The book's protagonist, Isabella, was orphaned by the plague. It is also a time when Venice was a great musical center, with numerous opera houses and choirs in all the large churches. Claudio Monteverdi was the director and composer for the choir of San Marco's Basilica. The choir is important in the story, because Isabella wishes she could sing in it, but only males are allowed to sing in public. Her singing teacher, Margherita, tries to convince Isabella to sing opera but Margherita is murdered before they can get very far with that plan. It's also the heyday of the Ghetto Vecchio in Venice. There's a lot of singing, sleuthing, and swordfights.

Nancy: The plague? Yikes. Describe the genre of this particular title, and is the only genre you write in?

Alison: I write historical mysteries, romances and adventures for adults and teens.

Nancy: When did you start writing toward publication?

Alison: I was trained as a film historian, and my first two books were about film history. The first was the award-winning  Alice Guy Blaché, Lost Cinematic Visionary (Bloomsbury 2002). It's about the first woman filmmaker, who invented cinematic narrative as we know it. It's been translated to Spanish. A documentary film based on the book is in production by the PIC agency in Hollywood. The book was also the basis for a play by La Recua Teatro in Toledo, Spain, in 2012. My second book was The Films of Tim Burton: Animating Live Action in Hollywood (Bloomsbury 2005), which is an analysis of the work of Tim Burton but also a look at the transition from analog to digital film production, which makes all movies closer to animation. As a result we are closer now to how cinema was at its inception, when live-action and animation were also joined at the hip.

The Saffron Crocus is my first novel to be published. I have a prequel  to The Saffron Crocus in the works, (about Margherita's life and love before she came to Venice)as well as two other historical novels in progress or in the revision stage.

Nancy: My readers want to know what your writing routine is like.

Alison: I'm a full time writer. I get up at 5 am and write until 9 am. I try not to look at email before that. Then I have breakfast with my husband and get some exercise. Then I go back to the writing desk. In the afternoon, I write more, do promo, take care of bills, and work at sharpening my writing skills, usually by taking an online course of some kind or trying an exercise. There's always a skill to improve. I read at night after dinner. I'm also a screenwriter, so I have to keep up with the well-written TV shows and latest films. I read a lot of screenplays as well as books.

Nancy: I find I get more writing done early in the day...unless hubby is home! Are you a member of any writing organizations and, if so, have they helped?

Alison: I'm a member of RWA (Romance Writers of America) which really helped me transition from a wannabe novelist to a novelist. Going to RWA conferences and striving to reach PRO level helped me professionalize more than my MFA in Creative Writing did. It also made me think more about who I was writing for.  Going to my local RWA chapter meetings has made me feel less lonely, as writing full time can be very isolated. And by submitting my opening chapters to RWA chapter contests I got invaluable feedback that made me improve them to the point where when I finally started sending  a query with opening chapters to editors I got good responses.

I'm also a member of  MWA (Mystery Writers of America). Going to my MWA chapter meetings is also very helpful. They have great speakers on various subjects and I learn a lot, about weapons and legal systems as well as writing. Mysteries, like romances, have their own particular structure, and I learned that structure from other writers, as well as reading books.

I joined ITW, International Thriller Writers, as a screenwriter but I find them very helpful to me as a novelist. They have a great program called the Debut Authors program, which I'm in now.

Finally, I'm a member of the Historical Novel Society. That's a group of people really devoted to history, their conferences, which alternate between the US and the UK, are just wonderful, and I've made some great friends there, as well as finding some great books.

Nancy: Will you share some encouraging words for authors still struggling for that first contract?

Alison: Once you are ABSOLUTELY SURE your book could not be improved, start sending it out. You will get offers eventually. The important thing is not to settle for the first offer you get. Once you are getting published, make sure you get a good cover. A good cover is really important. I'm really grateful to Mishi Bellamy for the lovely cover on Saffron Crocus.

Nancy: Please Share three fun facts about you that most people don’t know.

1) I grew up in Spain while Franco was still dictator. It really colored my political perspective.
2) I took fencing lessons to help me write the sword fights in Saffron Crocus.
3) A couple months ago I went to Diagon Alley at Universal Studios and got an interactive wand. My husband was embarrassed to be seen with me at first, especially when I was in line with small children. But he got into it after some generous seven-year-olds showed us how to use the wand and make magical things happen.

Nancy: A trip to Universal's Harry Potter World is on my bucket list! What’s next for you?

Alison: I'm writing a YA Historical Adventure novel called The Circassian Slave Girl, set at sea, on the island of Rhodes and in Istanbul in 1483. I'm also working on a prequel to Saffron Crocus, and two historical novels for adults. One of my screenplays, a sci-fi mystery, has been optioned and I'm rewriting it for the director.

Venice, 1643. Isabella, fifteen, longs to sing in Monteverdi’s Choir, but only boys (and castrati) can do that. Her singing teacher, Margherita, introduces her to a new wonder: opera! Then Isabella finds Margherita murdered. Now people keep trying to kill Margherita’s handsome rogue of a son, Rafaele.

Was Margherita killed so someone could steal her saffron business? Or was it a disgruntled lover, as Margherita—unbeknownst to Isabella—was one of Venice’s wealthiest courtesans?
Or will Isabella and Rafaele find the answer deep in Margherita's past, buried in the Jewish Ghetto?

Isabella has to solve the mystery of the Saffron Crocus before Rafaele hangs for a murder he didn’t commit, though she fears the truth will drive her and the man she loves irrevocably apart.

KUDOS for Saffron Crocus:
I adored this beautifully written, passionate book. The Saffron Crocus is a glittering, thrilling opera of a novel that plucked my heartstrings and kept me reading at fever pitch. Brava, Alison McMahan! Encore!

Excerpt
Who knew a singing career would be this much trouble?

“Rafaele!” She flew into the garret. “Piero, it was so wonderful, wait until I tell you!”
The stool next to the bed was knocked over. The tray with the genepy bottle was on the floor, one of the cups broken. The fat candle that had been burning next to Rafaele’s bed had been flung to the other side of the room.. Canvases were strewn all over the floor, some of them slashed, and many of Master Strozzi’s jars of paint elements were broken.
Did Piero and Rafaele have a fight? She quickly suppressed the thought. Who would get into a fight with a man who was already injured?
Something else must have happened.
She walked across the garret. “Piero? Rafaele, are you here?”
Rafaele was not in the bed. The sheets and blankets she had piled on top of him were strewn everywhere. Blood-stained sheets spilled over the edge of the pallet. There was a pile of clothes on the floor.
She walked around to get a closer look.
Not clothes. It was Piero. Face down, one arm over his face, as if to defend himself.
A puddle of blood under him.
Dead.

How can my readers buy your book?
Readers can buy the book, in print or as an e-book from the publisher, Black Opal Books, on Amazon, on Barnes and Noble online, on Kobo and Smashwords. The webpage with all the buy links for the book is www.TheSaffronCrocus.com

MISHI BELLAMY, (Cover Artist) bio
The cover is the work of fabulous artist Mishi Bellamy. Mishi divides her time between India and France, where she has her own art gallery, the Atelier des Colombes.
www.MishiBellamy.com
www.Atelierdescolombes.net 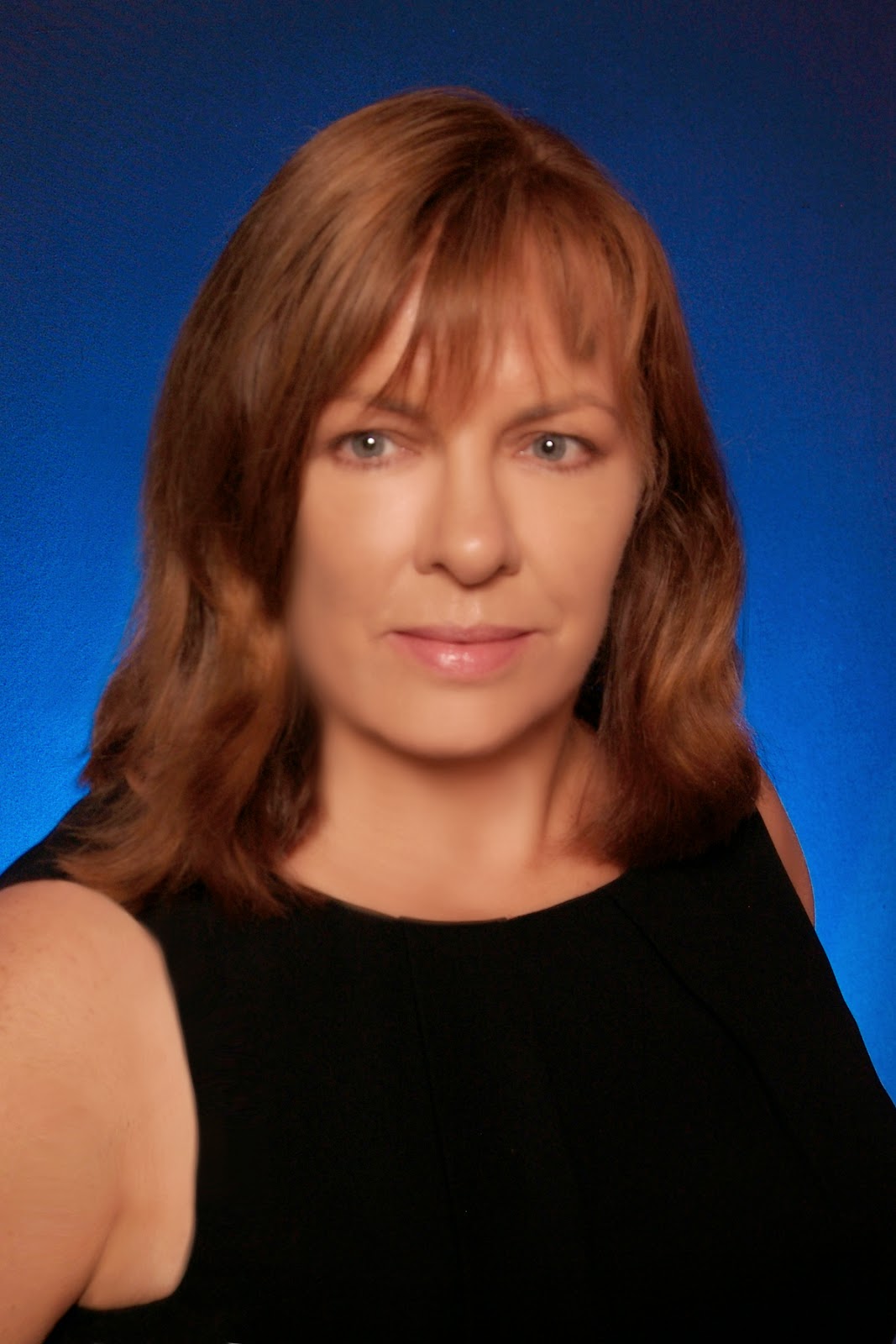 MORE ABOUT THE AUTHOR
Alison McMahan chased footage for her documentaries through jungles in Honduras and Cambodia, favelas in Brazil and racetracks in the U.S. She brings the same sense of adventure to her award-winning books of mystery and romantic adventure for teens and adults.

She loves hearing from readers.