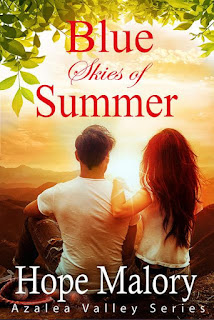 A fellow Soul Mate Publishing author stopped by to share her latest book. Take it away, Hope Malory!


Thank you, Nancy. My newest release, Blue Skies of Summer, is now available as an ebook. This romantic suspense, the third in the Azalea Valley Series, can be read as a standalone. The first and second in the series, Wildfire and Roses and Rhythm in Blue are also available through Amazon and my publisher, Soul Mate Publishing, in both ebook and paperback formats.

Book Blurb:
Coach Blake McLemore loves women. All women. The way they look. The way they smell. The way he feels when he is with them. But he has yet to meet one he wants to commit to much less  spend a lifetime with. Until he meets Krystan.

Krystan Parks breaks free from an abusive marriage. While she and her son escape to a peaceful small town, danger follows them. The last thing she wants is another man in her life. Until she meets Blake.

What are the odds for a matchup between a jaded single mom on the run and the handsome ladies’ man protecting her from a dangerous ex-husband? Will their season end with a strikeout or a homerun?

Excerpt from Blues Skies of Summer

Blake McLemore stared in horror as a stranger bolted into the Yellow Butterfly Café wielding a handgun. A customer screamed. Familiar faces of the regular lunch crowd packed the restaurant. Friends, neighbors, and three of his baseball players. Moments before, conversation, laughter, and sounds of people eating filled the room. Now, everyone fell silent.
“Krystan.” The shout drew Blake’s attention back to the gunman. “I know you’re here.” The man edged along the side wall of the dining area scanning every table with the barrel pointed as he moved. “I’ll start shooting until you come out.” The cashier fainted when he swung the gun in her direction.
Frustrated, Blake was too far away to tackle the guy. Any wrong moves and someone would be injured—or worse.
Mia, the café owner, eased through the kitchen door with her hands up. “Krystan isn’t here.”
“You’re lying. If she doesn’t come out, you’re the first one I’ll shoot.” He yelled louder, “Krystan.”
Blake grew up with Mia, and she never shied away from anything, yet her voice tremored, and fear clouded her eyes.
“I swear she left.”
The man aimed the gun toward her and fired.
A frisson of fear shot through Blake. Seconds passed before he released the breath he held while waiting to discover Mia’s fate. Cold sweat trickled down his back. 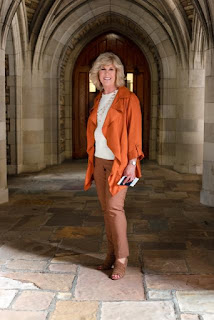 Hope Malory, author of contemporary romance and romantic suspense novels, grew up in a small Tennessee town. An avid reader, she was often away on an adventure in her mind…a true foreshadowing of things to come. Ms. Malory invents strong-willed characters and puts them in precarious situations.

Today, Hope and her husband live near Nashville and travel as often as they can. Together they still make plenty of time for family including two grandchildren, but you’re just as likely to find them preparing for their next journey. Hope’s love of travel and culture make it into her novels giving them a touch of intrigue and creating beautiful settings for a down home story of love and family. Connect with her here: