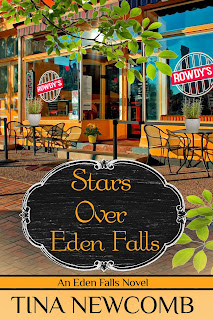 Thanks for letting me visit your blog, Nancy! I started writing Sweet Romance at a time when publishing houses weren’t buying, so I learned about self-publishing and haven’t looked back.

Stars Over Eden Falls is the 7th book in my Eden Falls Series which came to life after a vacation through Washington State. What started out as a story about four friends, blossomed into more when several pesky secondary characters wanted their own stories.

Sometimes you have to experience heartache to find happiness

Stella Adams just discovered boyfriend Len Barlow is really Jerry Winters. Worse…he’s a married man with three children. Devastated, disillusioned, and racked with guilt, she throws herself into work at the local flower shop and volunteering at Eden Falls’ shelter and senior center. Question: Should she contact Jerry’s wife and tell her—thus admitting her own involvement, and possibly breaking up the family—or leave the poor woman in the dark?

Rowdy Garrett has been good-naturedly sparring with Stella for years, but when he hears of her breakup, he realizes this may be the chance he’s waited for. He’s determined to win Stella over. Problem is his heartbreaker reputation is well known around town. If he messes up and hurts Eden Falls’ favorite second grade teacher, he’ll be run out of town.

Stella is well aware of handsome Rowdy Garrett’s escapades—all the women he’s dated and dumped. His love ’em and leave ’em attitude makes her eyelids twitch. Yet, Rowdy keeps proving her motorcycle-riding-bad-boy assumptions wrong. He donates food to the shelter, serves on the town council, mows lawns for widows, and sponsors little league teams. The Rowdy she thought she knew would never help her build a Fourth of July parade float or play peek-a-boo with his niece.

Can Stella look past Rowdy’s reputation as a player or has she closed her heart to the chance of a happily-ever-after?

“Time to get up. I’ve let you wallow in bed for three days.”
Stella yanked the covers over her head.
A cold hand grabbed her foot.
She jerked out of her sister’s grasp. “Go away, Phoebe.”
“Not gonna happen. Come on, Stella. You can’t stay in bed forever.”
On the pain scale from one to ten, this was her ten. Her chest felt hollowed out. How did someone recover from such deceit and heartache?
Stella felt the bed dip, a strong indication that Phoebe wasn’t going anywhere. She lowered the covers and squinted, one-eyed, against the bright light.
Phoebe lifted a brow. “You look like crap.”
Stella rolled her eyes. “Thanks so much. I appreciate your tender concern.”
Phoebe’s expression softened. “I say that in the most loving way. I know you’re hurting, but Len—”
“Jerry. The jerk’s name is Jer-ry.” Stella said the name slowly like she was pronouncing a hard word for one of her second-grade students.
“Jer-ry isn’t worth any more of your tears.”
Stella’s lip trembled, and she bit down hard. She would not cry in front of her strong police officer sister. “Did you tell Mom and Dad?”
“Yes. Mom wanted to come over, but I talked her into giving you a couple of days. She stopped by this morning with a batch of your favorite cookies.”
“Peanut butter?” Stella asked, hopeful. But that hope turned dark an instant later. “Just what my wide hips need.”
“To help out, I ate one. Okay, two.” Phoebe blew out a breath. “And a half. Leo had the other half.”
“If you don’t want any, I’ll take them,” said a familiar male voice.
Stella glanced at the door. Leo Sawyer—the brother she never had--grinned. She turned a glare on her sister. “You told Leo?”
He pushed away from the doorjamb with a shoulder while shoving a bite of her peanut butter goodness into his mouth. “Of course, she told me. I’m her best friend—her smart friend. You look terrible. When was the last time you brushed your teeth?” He glanced around. “Or cleaned your room? You need a shower and I need another cookie.”
“Leave me at least five or six!” she yelled at Leo’s retreating back. She glanced at Phoebe. “Thanks for that.”
Phoebe lifted a shoulder. “Eden Falls is a small town. He would have heard eventually.” 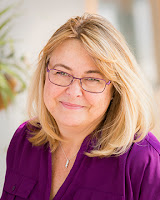 More About the Author
Tina has published seven sweet romance novels in her Eden Falls Series, which feature a quaint town, quirky characters, and happy endings. People have said:
“…the author’s approach is delightful and fun.”
“The author brings her characters right into your heart…”
“I didn’t want to leave Eden Falls or the people I so enjoyed meeting.”

Tina’s hobbies include writing, gardening, and spending time with family. She lives in Northern Colorado with her (amateur) chef husband. Six of their eight kids and one of three (soon to be five) grandchildren live nearby. Connect with Tina Newcomb:
WEBSITE     FACEBOOK     TWITTER
INSTAGRAM     GOODREADS     PINTEREST
BOOKBUB     NEWSLETTER
Posted by Nancy Lee Badger at 8:30 AM