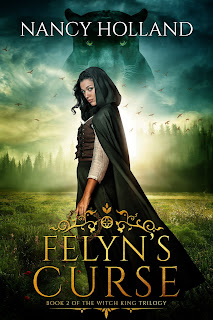 I invited author Nancy Holland to stop by and share her latest book release with my readers. Take it away, Nancy!

Thanks! Felyn’s Curse, book two of the Witch King trilogy, will be released March 5 by Tule Publishing.

Can love and sacrifice conquer a curse?

When Felyn was a young, defenseless witch, she was cursed to live as a shape shifter—a deadly panther. She might have been rescued and raised by a noble and powerful leader, but she lives in fear she will hurt those she loves in her animal form so each full moon she hides deep in the forest. But how can she refuse her adoptive father’s plea for an arranged marriage with a new ally? After all, it’s temporary and in name only…

Varz agrees to an arranged marriage reluctantly because he needs the military and diplomatic alliance. He has secrets and a growing power struggle back home. He's relieved he need only marry the young witch for a year until he meets his bride. Felyn is beautiful and intelligent and not easy to ignore, but Varz is a man of his word. His vow to leave his bride untouched will be the hardest one he has had to keep.

Felyn woke to the cheerful sounds of a camp on the move toward home. She stretched and sat up just as Varz came into the tent with two bowls of warm breakfast gruel.
Suddenly hungry, she stood and took one, then settled, a little awkwardly, on the ornate chair next to the one Varz sat in.
“How can I help prepare for the journey?” she asked to break the silence.
“You can’t. You must stay in the tent,” he said casually.
“What? Why?”
“You must appear to my men to now be my woman in every way.”
“I know little of such things,” she admitted with a frown, “but I do not see how that would make me incapable of work.”
“Not incapable,” he replied with a small laugh, “but too tired from a sleepless night and too content to wish to work.”
“Ah.” She remembered such mornings between Thalgor and Erwyn. “And you would be indulgent enough to let me sleep, even in the midst of all the preparations.”
“I am a very indulgent man, under the proper conditions,” he said with a look she could not read.
“Which do not apply here,” she reminded him primly.
He sighed and stood, taking their empty bowls. “Sleep, woman,” he told her, not unkindly.
And, strangely, she did sleep. Perhaps because she had slept so little the night she went into the woods.
By noon the light was so strong, even in the tent, that she could sleep no more. With a yawn, she dressed, threw all the pillows in a single pile, then went in search of Varz and food.
But when she stepped from the tent, she found half the circle gone, people, tents and oxen.
She was alone with Varz and his warriors.
She nearly collapsed from the shock and grief, but rage won out in the end.
She found both Varz and food where he ate a lunch of mutton stew by the cooking fire. She took the bowl the cook gave her and threw it at her new man, hitting him square in the chest.

Nancy Holland recently began to live her dream as a full-time writer. Her heroes and heroines want to make the world a better place, struggle to change their lives, and learn to trust each other. After studying books by people from other times and places, she loves to explore foreign cities where she can touch the reality behind their words. Connect with her here: