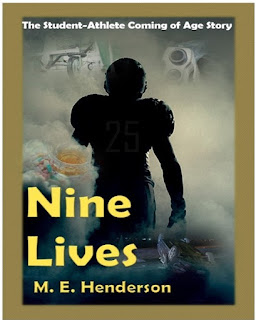 I met M. E. Henderson here in Raleigh, North Carolina at a TAF meeting. Marvis and I attended these once a month dinner-optional-but-we-love-to-eat meetings of an organization we both enjoy. The Triangle Association of Freelancers helped me in many ways, and I invited Marvis to share her new book with my readers. Take it away, M. E.!

Nine Lives is my debut novel, writing as M. E. Henderson. This self-published novel was released on Kindle version in October 2018 and the Paperback in November 2018. The story is about the reasons behind a college football player’s decision to stay his senior year or enter the NFL draft after his junior year. His mother understood that football was big business in college and professional sports. Her goal was to keep him grounded.

“For those that do not know, college football is big business. I am Hunter Eugene Terry, Jr. and I have something that big business wants: Me!” The NFL wanted him too! Should he enter the NFL draft or stay for his senior year of college? If only that decision was the usual football player’s dream of fame. He was different. His near-death experiences and his loved ones dying around him weighed deeply on his mind as he contemplated what to do about his future. In the meantime, while his mother wanted him to finish his senior year in college, his uncle was already counting Hunter’s future earnings. Whom could he trust with his football career on the line?


“You had no right!” I screamed on the phone.
“Calm down, Sis,” Michael replied.
“Do not, I repeat, do not call my son again!”
“What’s wrong with talking to my nephew about his future?”
I did not answer. When the silence went beyond awkward, Michael broke it. He mumbled, “You weren’t like this before, Liz.”
“When I thought you had my child’s best interest at heart, I did not mind you talking to him. Your greed is talking, and I will not allow it. I am warning you! Stay away from my child!”
Michael angrily retorted, “Well, he ain’t a child anymore. He is twenty years old and he can make his own decisions. So, he doesn’t need to hide behind mommy’s dress anymore. If he wants to…”
Elizabeth hit the End Call button on her phone. She was too angry to sit, so she stalked around her bedroom. Her mind was racing, “Should I call Hunter? No, I promised myself I would not interfere. I promised not to interfere. Well, that was before everyone started to interfere. I told Hunter it was his choice. I told him I would support whatever decision he makes.
With all these people giving him their opinion, I know his decision can’t be easy.”
She could not take it! She decided she would send him a text. She began searching for her phone. She was so furious with her brother until she threw the phone on the bed, however it must have bounced off the bed and onto the floor. As she bent down to look under the bed, she prayed,
“Lord, please do not let the phone screen be cracked. That is the last thing I need to happen.” She almost cheered when she retrieved the phone from under the bed. Thankfully it was not cracked.
She went to the chair and took a deep breath.
Elizabeth texted her twenty- year-old son, Hunter, a message, “You will do the right thing.”
Before she could hit the send button, her phone chimed. Hunter had replied, “I hope so.”
Elizabeth knew what she had to do. She dropped to her knees and began to pray. The Lord had heard her cries before. Hunter had been through so much in the last four years. She prayed for the Lord to give her son the discernment to do the right thing. 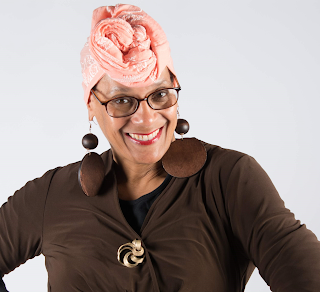 More about the Author
Marvis’ college degrees did not prepare me for the biggest challenges of my life. In 2002, she was diagnosed with Fibromyalgia. It robbed her of the life she planned. Before she became disabled, she served as a branch manager of Employment Security Commission and served in several leadership roles in her community and church.

She admitted, “By 2014, I did not have the energy to take my child to school. In less than six months, he would be entering college. I knew I had to change my lifestyle. Gluten, yeast, and caffeine free were not enough! I unsuccessfully tried water therapy, yoga, and the gym. I finally started urban soul line dancing classes. It worked!”

Because of the change in lifestyle, she is living dreams and creating new opportunities. One of those dreams was writing. She published her first novel, Nine Lives in 2018. She created new opportunities as the Coordinator of Fun and CEO of M. E. Henderson, Inc. She uses urban line dance to throw parties, participate in health awareness activities, and teach classes at Covenant Presbyterian, Holton Career, and Creedmoor Elementary.  She also speaks to audiences about creating positive lifestyles for people with chronic illnesses. She is also the founder and Vice-Chairperson of Lift Every Voice Institute, a 501©3 organization that provides academic and social enrichment opportunities to students and their families. In 2018, she received the ACHI Public Service Award. In addition, while her son graduated from college in May 2018, she started working toward another dream and became a doctoral student in April 2018.

Connect with her here: