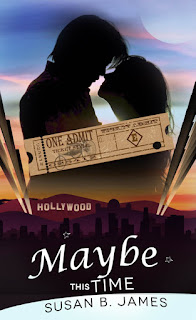 Author Susan B. James dropped in to share her latest release. Take it away, Susan!

Book Blurb
TIME TRAVEL? Worst birthday present ever!
London stage star Jennifer Knight, is perfectly happy until a freak accident sends her tumbling back in time from London, 2001 to 1988, landing her at the feet of computer genius Lance Davies, the man who’d captured her heart and then stomped on it - her ex-husband.

Lance follows his once and only love back to the future, tangling time, and landing them both on the world's missing-and-presumed dead list. Now the only hope of righting the universe is to change a past they have yet to experience. If they manage rescue their future-selves from New York City on September 11, 2001, Jen and Lance might have a chance to start again. And maybe this time - just maybe – Lance and Jen will get it right.

Excerpt from Maybe This Time
Jen looked into the face of the man she’d adored since she was nine, and actively avoided for the last twenty years. Lance looked almost the same as the day they’d parted. A few more lines framed his hazel eyes, now sea-dark with concern. His brown hair showed no trace of gray. It was still too long, with the same stupid lock falling over his forehead. She automatically reached to brush it back. Stopped herself. Her throat was so dry. Where was a cough drop when you needed one? “You’ve aged well.” Jen’s knees buckled.
Lance kicked out a chair and sat, pulling her into his lap. “It’s okay. Whatever it is, we can fix it.”
His warm, strong hands sent shock waves shivering through her body. She shook her head mutely.
Lance’s voice sharpened. “Is it Jeremy? Kathryn? Has something happened to them?”
“Uncle Lance!” Kathryn stopped in the living room archway, eyes child-solemn. “Why are you hugging Aunty Jen?”
Jen slipped out of Lance’s arms and landed on the floor. Could this get any worse?
“Aunty Jen says you are a stupid head with a big brain and no feelings.”
Jen rose with all the dignity she could muster. “You shouldn’t repeat things grownups say, Kitty-Kat. It’s not polite.” She reached for the packet Mrs. Flannery left behind, willing her hands not to tremble. “Here are the papers, you came for. Nice to see you. Goodbye.”
Lance glanced from Kathryn to Jen. “Where’s Jeremy? I know he and Kitty-Kat went to Sussex. Why is she back without him, and what are you doing here?”
“We couldn’t get home, Uncle Lance. So we came here.” Kathryn scuffed her foot, now shod in a plastic Jelly shoe, against the wood floor. “I thought Jen would like the machine, but I don’t like being young again. My brain is too small. I want to go home.”
Lance’s hand tightened on the papers he held. “Kathryn,” he said carefully. “How old are you?”
“I’m nineteen and I want to go home.”
Lance catapulted out of the chair. “It worked. By all that’s good and beautiful, it worked. I didn’t think he could do it.”
“You knew? You knew what he was working on?”
Lance’s grin changed to the expressionless mask she used to hate so much. “Of course, I knew. I divorced you. Not your brother. I was helping him with the theory. He probably would have told you about it, had you been interested in anyone but yourself and your career.”
Jen resisted the urge to punch him. One of them reverting to childhood was enough. Too bad. Her boxing trainer said she had a fantastic right hook. She kept her tone smooth and even. “I don’t know when we are, but I turned forty-nine yesterday, Lancelot, and you don’t know half as much about me as you think you do. I am very interested in my niece, and she’s standing there listening to every word we say.”
Lance turned to Kathryn. “I’m sorry, sweetheart. Your aunty and I won’t fight anymore.” He crooked his little finger at Jen the way they used to do when they were children. “Pax?”
Resisting the temptation to break it, Jen hooked her little finger in his. “Pax,”
Kathryn curved her little finger around theirs. “Pax. Now can we get ice cream?”
Maybe This Time is available as an eBook, paperback and audiobook which is narrated by the brilliant Stephanie Bentley. 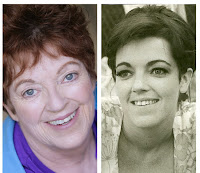 More about the Author
Susan writes second chance romances with a touch of magic as Susan B. James and children’s books as Susan J. Berger. She writes older heroines because she is chronologically gifted and enjoys creating characters who remember that change is only on the outside. Inside our older shells is a much younger psyche.
In her debut romance, Time and Forever, two women in their sixties inadvertently travel back to London in 1969. Maybe This Time, is the companion book.

Susan’s other career is acting. In 2016, among other things, she killed Kathy Bates on American Horror Story- Roanoke. In 2017, among other things, she got stabbed by a pen on Future Man and played the victim on Major Crimes. Karma? So far in 2018 she’s been a babysitter on Lucifer, a bar-fly on Shameless, A tattoo addict on Mom, and she died in the yet-to-be-released movie, Looks that kill. More to come..

Email ThisBlogThis!Share to TwitterShare to FacebookShare to Pinterest
Labels: a new release, Maybe This Time, Susan B. James, Time Travel