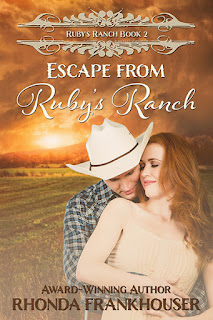 Rhonda Frankhouser stopped by to share her newest release with my readers. Rhonda, please tell us all about it. (psst! She is also with Soul Mate Publishing)

A little bit about the series…

The original RAVEN Finalist and RONE award 2nd runner up story, Return to Ruby's Ranch, was Ruby Lattrell's story, the 3rd generation heroine who inherited the ranch after her grandmother passed away. Her cathartic journey was one of discovery as she returned to uncover the truth about the mysterious disappearance of her mother, Katherine and why Granny Rube had gone crazy in the end.

Book 2 of the Ruby's Ranch series, Escape from Ruby's Ranch, takes the reader back one generation to Katherine's treacherous journey. Throughout her young life Katherine dreamed of escaping her over-protective mother and boring ranch life to become a famous painter living in the big city. That all changes when the stoic, horse whispering cowboy, John Lattrell, wins her heart. They build a beautiful life together until secrets and twisted relationships steal her away from her precious family. Katherine's fight to get back to John will stir anger and hope in your heart.

Book Blurb
Katherine Adams dreams of getting far away from her over-protective mother and the quiet, subdued life on Ruby’s Ranch. She’s drawn to the excitement of the city, the idea of her paintings hanging in glamourous art galleries, wearing the finest fashions and eating in quaint sidewalk cafes. Every detail of her escape is lined out until a handsome horse whisperer gallops into her world.

John Lattrell is a master at taming wild animals but he’s never seen a creature as stubborn and free-spirited as the beautiful, young Katherine. From the first moment, she drew him into her inquisitive soul, leaving it bare for all the pain that was destined to come. Will ghosts from his past ruin his chances at capturing her heart?

Katherine is torn between her dreams and her desires. John is tormented by the thought of losing her. What will become of their love when family secrets and betrayal come between them?

Escape from Ruby’s Ranch is available only at Amazon

Excerpt:
Everyone, including Katherine, watched the tall, handsome stranger walk toward the stage to join the band. He moved with a manly grace, telling her he’d be talented at anything he tried. Riding, dancing, lovemaking. Anything.
“Oh, my,” she whispered again. She pushed her shoulders back when he headed toward her on his way to the stage. She regretted re-buttoning that top button.
She was stunned when their eyes met, like she’d been paralyzed by Blue Coral snake venom. He smiled again, obviously appreciating her reaction.
“I hope you’re not leaving. You haven’t even heard me play yet.” His voice was deep and rhythmic. A sensual song without music.
Katherine didn’t have words. She couldn’t make her mouth move. She stared at him, smiling stupidly, wondering how his full lips would taste against hers.
“You all right, Miss?” He pushed the hat back on his head and leaned in for a closer look.
A low moan escaped when she caught the scent of his earthy cologne. His concerned gaze held her until the announcer again requested his presence on the stage.
“Miss?” He smiled again. “Are you gonna be okay?” He steadied her with a strong hand against the small of her back. She quivered from the heat of his touch.
When their eyes locked, a breath caught in Katherine’s throat. The smile on his ruggedly handsome face, turned now to an expression of curious longing. The seconds that passed between them felt like hours. Just as he started to speak, Casey pressed his energy between them and broke the spell. 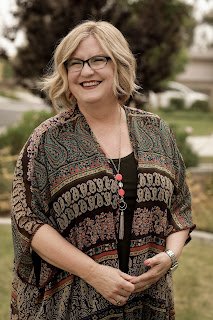 Rhonda has been an author with SoulMate Publishing since November of 2016, though she's been a story teller all her life. Her first novel, Return to Ruby's Ranch, earned a finalist honor in the Uncaged Book Review Raven Awards, a 2nd Runner Up in the prestigious InD'Tale Magazine RONE awards and a Books and Benches, Reviewers Top Pic ~ Books of Distinction award. As of April 2018, she is a full time writer, so look for more romance, mystery and intrigue to come your way. Connect with her here…