A New Release! WITH EVERY KISS 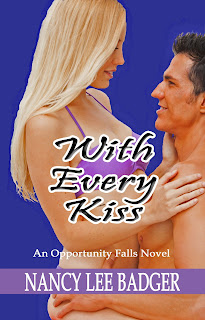 I released my latest novel on November 3rd,

With Every Kiss, an Opportunity Falls novel is available in ebook & print.

Fall in love amid the New England countryside with Abby and Mitch.

An artist bored with the city life and a Manhattan lawyer itching to escape his father’s control wind up in a New Hampshire campground. A coincidence? Not likely! 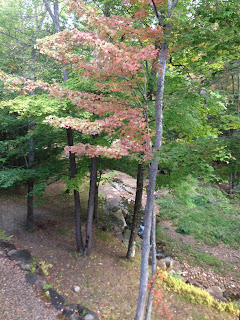 Excerpt:
Heat swept across Abby’s cheeks as Mitch’s words sunk in, words she’d heard many times, from many men. But, the location was quite different. Nothing like a soft bed surrounded by privacy. Although she trembled with anticipation for more than his kisses, she couldn’t make love out in the open.
Without responding to his statement, she glanced at the river valley. She forced her breathing to slow, and slipped sideways until she had a view of the entire valley, a view unobstructed by a dark, towering male body.
“Did you hear me?” Mitch said, his voice as dark and ominous as his gaze.
“I did, but this isn’t the place.” That sounded better than a definite no. She wanted to say no. Don’t I?
“I should have brought a sleeping bag. We could sleep under the stars,” he said, and stepped closer. He kept one palm flat against the rock beside her head, and the other on his hip. As if he dare not touch her.
She chuckled.
“What’s so funny? Star gazing is awesome, in these mountains.”
As if I’d waste time watching points of light in the sky when he could be beside me, over me, inside me.
She gasped at her crude thought, but when he stepped farther away, she immediately missed his heat.
“Better yet, I want you in my bed where our lovemaking will be comfortable and endless. This outcropping isn’t private enough or I’d take you up against this granite wall right now.”
Abby stared at him, and forced a sly smile. “You’re a gentleman.”
“Why? Because I don’t want an audience when I make love to you? People on the beach can see us.”
“Oh?” He’d rather take her in private than against a wall out in the open?
Too bad. A gasp escaped from between her swollen lips at the image. How could she change his mind?
Am I crazy to try?
Find all buy links HERE