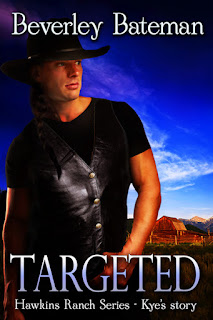 All the way from Alberta, Canada, Beverley Bateman stopped by to share some news about her book, Targeted.

Targeted is the third book in the Hawkins Ranch Series. The series was born when I was staying at an elegant hotel in Victoria, BC. I was looking down into the lobby from the mezzanine and imagined a cowboy in boots with spurs striding across the marble floor. I came up with the first brother in the Hawkins family. Kye is the third brother, an adopted member of the Blackfoot tribe.

Blurb
After an eleven year absence Janna Kincaid inherits a ranch and is forced to return to a town she only remembers with unhappiness, a man to whom she was briefly married and never wants to see again, and someone is trying to kill her.

Kye Hawkins has loved Janna since he first met her. They were married but a few weeks later she ran away, without an explanation. He still hasn’t figured out why. Now she’s coming back. Does she still love him? Can he rekindle the romance and also prevent her from being killed.

Janna doesn’t want Kye’s help in anyway, yet he always seems to be there when she’s in trouble. Can they work together to find a killer, save the Native burial ground and home of the spirits, and find romance again?

Someone had shot her back tire. Janna gripped the wheel to keep the vehicle on the road. She debated whether to try and outrun the shooter, wherever he was, or find cover. The windshield shattered as a third bullet entered the passenger side.
So much for outrunning the shooter.
She scanned the area and spotted an outcropping of rocks a few feet ahead on her right. She aimed the vehicle in that direction.
Two more shots, and both the back tires went down.
Definitely find cover.
Janna ducked low behind the steering wheel until the vehicle reached the rocks. When the car stopped, she grabbed the keys from the ignition and her purse and dove out the door. Bullets bounced off the rocks behind her as she scrambled for cover. Whoever was doing the shooting was serous. Anyone of the shots could have hit her.
She reached the rocks, keeping low until she got to the middle where she curled up as tightly as possible, her back against a rock. Her heart pounded in her ears, her breathing came in gasps. This was getting to be a habit. First someone tried to kill her in Seattle, and now, out in this god-forsaken country.
What the hell is going on? Why are they shooting at me? Was it the same person who shot at me in Seattle? That doesn’t seem likely, but who even knew I was coming here? Maybe it’s someone just trying to rob a stranger.
Yeah right, be honest, Janna, does this road look like many strangers came this way? And if they did, would they have a lot to steal? You really think this person selected a spot in the rocks where he would have a good shot at my vehicle. Coincidence? Not damn likely.
At least she’d worn boots and jeans—even if they were designer jeans. Now they were filthy, and so was her red sweater and jean jacket.
Another shot hit the rock behind her. She rolled over onto her stomach, shaded her eyes, and squinted into the sun. He must be up on the cliffs straight ahead. She wasn’t sure, but she thought she might have glimpsed a light, maybe a reflection off his scope.
Terrific! Now what? My gun is in my purse. I could fire back, but that would be a waste of bullets at this distance.
She yanked out her cell and punched in 9-1-1.
Damn—no reception.
A pounding pulsed through the ground. It felt like horses. A hand appeared in front of her face.
“Grab it and jump on.”
The deep, rumbling voice was not asking. It was an order.
Buy Links

Beverley Bateman now lives in Medicine Hat, Alberta, exchanging the Okanagan vineyards and orchards for ranches and farms. She lives there with her husband and Shiba Inu dogs. Winters she heads south. She writes her latest romantic suspense in both places. Hunted, Missing and the newest – Targeted are part of her Montana, Hawkins Ranch series. She also has her Holly Devine series; A Cruise to Remember, and A Murder to Forget. Don’t Go is her darker romantic suspense.