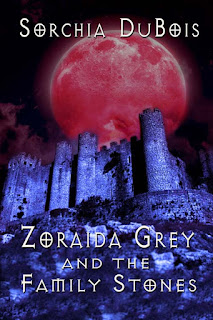 I asked author Sorchia Dubois to share a little about her Zoraida Grey series. Take it away, Sorchia!

Zoraida Grey and How She Helped Me Hide from Reality
I’m sure psychologists have a name for this condition and I’m sure many authors have been diagnosed with it. When the real world gets a little intense, we escape into our stories. My latest delusion is my Zoraida Grey series.

The series starts with Zoraida Grey and the Family Stones, now a finalist for a Prism Award. The award is offered by the Fantasy, Futuristic, and Paranormal Romance Writers, a chapter of Romance Writers of America and I’m over the moon with excitement just to be a finalist. The winner won’t be announced until late July.

In Family Stones, Zoraida lands in a haunted Scottish castle which is a conglomeration of all the best parts of all the castles I’ve ever encountered. It has an enchanted ballroom floor, a haunted East Tower, an oubliette, an ancient tunnel leading to a crystal-encrusted cavern, and other oddities too numerous to mention. Building Castle Logan could be a book all by itself. She meets two seductive Scottish witches but neither one of them seems entirely on her side.

The next book in the series will be Zoraida Grey and the Voodoo Queen. To gather the clan for an assault on Castle Logan, Zoraida travels to the Caribbean to retrieve a wayward witch who has stepped into a huge pile of Voodoo. Before they can return to Scotland, Zoraida must cross the Gulf of Mexico in a modern-day pirate ship, survive a hurricane, slog through the Yucatan jungle, and battle a Voodoo priestess and her army of red-eyed minions. I hope to release it late this summer or early fall. It has been a blast to write!!

The final book in the series will be Zoraida Grey and the Pictish Runes. I already know it will involve even more spookiness at Castle Logan, quite a lot of steamy romance, dangerous plans to restore the witchy Logan clan to a power they’ve not enjoyed in centuries, and equally dangerous plans to stop them. I’m a sucker for a happy ending, but not all the characters will make it to the very end. If everything goes the way it should, I’ll release it before the new year—or soon thereafter.

Somewhere in the middle of these, I also have an anthology of Zoraida Grey short stories called Witchling in the works. It contains stories about Zoraida as a kid and as a young woman before the events in the series take place plus a couple of tales delving into Logan family history. I’d planned to send it out into the world in May, but I’m behind schedule. July or August is probably more like it.

I’ve had such fun writing the series and I think that translates into fun for readers. I’d love to hear what any of you think of it.
Writing is my chosen form of escapism. What’s yours?

Book Blurb:
Granny’s dying, but Zoraida can save her with a magic crystal of smoky quartz. Too bad the crystal is in Scotland––in a haunted castle––guarded by mind-reading, psychopathic sorcerers.
Getting inside Castle Logan is easy. Getting out––not so much. Before she can snatch the stone, Zoraida stumbles into a family feud, uncovers a wicked ancient curse, and finds herself ensorcelled by not one but two handsome Scottish witches. Up to their necks in family intrigue and smack-dab in the middle of a simmering clan war, Zoraida and her best friend Zhu discover Granny hasn’t told them everything.
Not by a long shot.

Excerpt
Jade green walls contrast beautifully with the burnt oak trim. A wide casement window looks over the courtyard and across it to the darkened East Tower. Michael leads us to a glass case mounted on the wall. Milky jade stones glimmer against a black velvet background.
“Rumor has it a clan member turned pirate once upon a time. The necklace is part of his hoarded treasure. Whatever its origin, it is a unique piece. Beautiful, exotic, and priceless. A perfect setting for our beautiful and exotic guest.” He dimples at Zhu and I think she might wrestle him to the floor and have her way with him. I am disgusted by how easily she falls for this.
He turns to me and the force of the spell catches me full in the face. He touches my arm leading me to the door between my room and Zhu’s. A flush of warmth radiates from his hand and I follow him like a sheep.
“Your room, Zoraida.” He caresses my name, saying it slowly, meeting my eyes. “We call it the Lilac Room. It once belonged to the bride of a Logan clansman. She suspected her husband of sorcery and had the bad taste to spread the rumor in the village. At the time—the mid-fourteen hundreds—witchcraft was frowned upon and I’m afraid the villagers actually marched to the castle en masse, torches blazing, to demand the clansman be burned at the stake.”
“What happened?” Zhu’s eyes are still glassy. I consider whipping out my phone to take a picture of her so she can see what an idiot she is being. Then I catch a glimpse of myself in a framed mirror. I have the same stupid look. My reflection frowns back at me, the spell broken.
“That particular clansman happened to be an authentic witch.” Shea speaks from the hallway and I nearly jump into Zhu’s arms, thinking Lorne Logan has come to make sure I behave myself. “He enchanted the villagers, murdered the wife, and lived to a ripe old age. Scotland is notorious for unhappy endings.”

Author Bio:
Sorchia Dubois lives in the piney forest of the Missouri Ozarks with seven cats. She edits technical
writing part time, but she spends a number of hours each day tapping out paranormal romance, Gothic murder, and Scottish thrillers. A proud member of the Ross clan, Sorchia incorporates all things Celtic (especially Scottish) into her works. She can often be found swilling Scotch at Scottish festivals and watching kilted men toss large objects for no apparent reason. Connect with Sorchia here:
Blog/Website     Twitter     Pinterest: