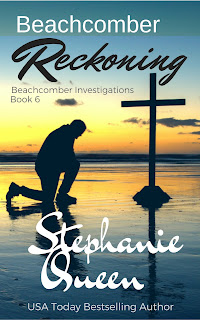 USA Today Bestselling Author Stephanie Queen stopped by my blog to discuss her latest release. Take it away!

Special ops legend Dane Blaise made a lot of enemies in his violent career, but none more dangerous than his first; the enemy he made before he'd been a legend, the one he made at the age of sixteen.

Local juvenile delinquent, Dagmar Hunt had the bad luck of running into Dane at the wrong time and wrong place. Dane knew he couldn’t let Dag get away with what he’d done. Dane was only a kid, but he’d been determined to make Dag pay. He went after Dag and succeeded in getting the notorious badass thrown in jail for a violent crime.

Dag never forgot what Dane had done. Over the years, while Dag was in and out of jail, he'd held his grudge and as he became more powerful and notorious, he made the ultimate threat to get his retribution.

Dane's past is finally about to catch up with him. Now he needs to protect the ones he loves most from paying the price.

In Dane’s experience—and he had plenty--whenever someone told him that it was their decision, their call to do something dangerous, that’s when he worried most.
When someone told him that they were the one responsible for the consequences for doing something foolhardy, that’s when he worked ten times harder to make sure nothing bad happened to them. Because he knew it was really all on him.
He would feel responsible no matter what they said.
Because he was responsible.
Dane’s mother had insisted it was her decision to visit him on Martha’s Vineyard. No matter how dangerous it might be.
He hung up the phone and had no idea how the conversation with his mother had gotten so out of control. But how could he stop her? He stared out the back door at the old Jeep-heap in his driveway and pushed a hand through his unruly too-long hair. The salty air had stiffened it on his evening beach run. The day had been breezy and pleasant.
He wished he gave a damn about the weather. If the sunshine mattered to him, that meant there were no problems on the horizon.
Today if hurricane hell blew into town he wouldn’t have cared.
Realistically, there was only one way to stop his mother, but it was too late for him to catch a plane to Hyannis then drive 200 miles to her house in the Berkshires. Then he’d likely get in trouble for locking her in a closet.
She was already on her way. His mother was coming to Martha’s Vineyard to visit him.
“Shit.”
“What’s your problem?” Shana said as she brushed past him where he leaned against the kitchen sink. She reached for the freezer door handle. Pulling it open, she grabbed the bottle of tequila by the neck.
“I’ll have a shot of that.”
“No kidding?” She rolled her eyes at him.
He’d need Shana to help him.
“Want to do me a favor?”
“You mean besides pouring you a shot?” She went to the upper cabinet and removed two old fashioned glasses.
“I mean professionally.”
She stopped what she was doing and took a closer look at him. He held up under her scrutiny. There was only one person who could rattle him with a look. And she was on her way.
“What do you need?”
“I need you to sit second chair protecting my mother.”
“Someone threaten her?”
“Not lately.” A bolt of pain shot through his shoulder blades. He’d have to tell Shana about the threat. Even with all the hell he’d been through since he left home for West Point after high school, there was no memory that struck more fear in his heart than the threat against his mother.
His mouth was clenched shut as he shut the memory out of his head.
She waited, leaned against the opposite counter with her arms fold across her chest, not hiding her ample breasts because that would have been impossible, but pushing them up, making them more prominent if possible. The glint in her eye told him she was teasing to distract him.
His man-parts told him it was working.
*****
She should be used to Dane having secrets, but she still hated it.
“What haven’t you told me?”
Worry ebbed into her chest, taking up space where air should be. She’d invited Dane’s mother for the visit. It seemed the right thing to do. Her mother was visiting. Why shouldn’t Dane’s mother visit, too?

More About Stephanie Queen
Stephanie Queen is the USA Today bestselling author of the romantic detective series, Beachcomber Investigations. She lives in bucolic New Hampshire with her family, her cat, Kitty and her fun-loving friends. Besides going to the gym sporadically, Stephanie cooks and crochets and loves chocolate covered potato chips (yes, she should go to the gym more often). She used to be a 9 to fiver working in downtown Boston, but has thrown her stylish suits and fancy heels in a closet and now hangs out in UConn t-shirts, jeans and sneakers. “If I could come back in another life as anything I wanted, I’d be a regency era heroine.” (Not surprisingly) Regency romances are her favorite secret reads. Connect with her here:
Newsletter Sign-Up    Facebook