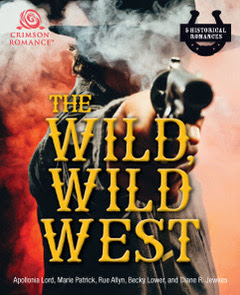 Please welcome Becky Lower to my blog. She and her fellow authors have recently released a multi-author anthology and she stopped by to tell us all about it. Welcome, Becky!

Becky- It’s a shootout at high noon in these high-stakes romances, with lovers’ hearts on the line. Saddle up and ride along with these couples as they try to outdraw Cupid. All the drama and sexy attraction of cowboys and the dangerous Wild West in a value-priced collection, The Wild Wild West, which released May 15, 2017, features full-length American historicals from Apollonia Lord, Marie Patrick, Rue Allyn, Becky Lower and Diane R. Jewkes.

Book Blurbs
Seduced by the Outlaw: Tamar Freeman has everything under control as the owner of Kansas City’s local newspaper until undercover lawman Amos Tanner responds to a lonely hearts ad that’s actually a trap to catch a burglary ring. To all he meets, he’s Deadwood Dick, an outlaw and the last man Tamar should fall for.

A Kiss in the Shadows: Driven by his single-minded revenge mission against the man who killed his brother, Brock MacDermott rides from town to town on a lonely quest. He’s careful to keep emotional attachments at arm’s length—until young, beautiful Stevie Rae Buchanan insists on joining his hunt to exact her vengeance.

One Moment’s Pleasure: Drawn to San Francisco during the Gold Rush, Edith narrowly escapes working in a bordello, but she can’t escape Dutch Trahern, who seeks redemption after his misspent youth. A relationship could cost them both everything they’ve worked to earn, but it just might be their path to salvation.

Expressly Yours, Samantha: To escape her wicked uncle, Samantha Hughes cuts her hair to pose as a man and become Sam Hughes, a Pony Express rider. There she meets Valerian Fitzpatrick, who joined the hard-riding circuit in an attempt to escape life in the family business. As he and Sam grow close, Valerian’s more than willing to protect her secret, but when Sam’s forced to run yet again, does a future with her mean giving up the freedom he’s always craved?

The Heart You Need: When reporter Adeline Ellsworth’s cousin is murdered in 1896 San Francisco, her investigation leads to danger—and she wakes up tied to Alec McCairn, Lord Peyton. In California to set up a new office, the Scottish peer definitely wasn’t looking for a romantic entanglement, but he suspects the beguiling Adeline is in over her head and too proud to ask for help. He’s determined to save her from herself.

Short Excerpt from Expressly Yours, Samantha
A sign at the post office caught Samantha’s eye. She feigned disinterest as she snuck sidelong glances at the poster about the new Pony Express, reading one line at a time.
Wanted: Young, skinny, wiry fellows.
She tore her glance from the sign and studied the customers queued up in front of her. Another quick look.
Not over eighteen.
She posted her letter and turned away from the window, catching the last of the poster’s message.
Must be expert riders.
Willing to face death daily.
Orphans preferred.
She was all of what they wanted, except for one basic and glaring fact. She might be young, skinny, and wiry, but she was no fellow. Samantha calmed her breathing as she walked away from the post office, but her mind was buzzing with possibilities. Her ticket out of the nightmare her life had become had just presented itself. She loved horses and had a good hand with them. All she needed to do was to hide her true identity—pretend to be a boy—and she was certain she could pull it off. Uncle Jack had enough money to keep him busy until after midnight. Samantha figured she had at least twelve hours to transform herself and get on the road. 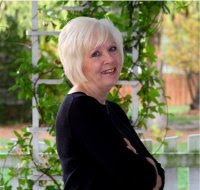 Author Bio: Amazon best-selling author Becky Lower has traveled the United States in search of great settings for her novels. She loves to write about two people finding each other and falling in love amid the backdrop of a great setting, be it in America on a covered wagon headed west or in Regency England. Her Cotillion Ball Series features the nine children from an upscale New York family prior to and during the Civil War. Her first Regency, A Regency Yuletide, received the Crowned Heart and has been nominated for the prestigious RONE award from InD’Tale Magazine. A regular contributor to USA Today’s Happy Ever After section, her books have been featured in the column on eight separate occasions. Becky loves to hear from her readers at beckylowerauthor@gmail.com. Also connect with here Here: