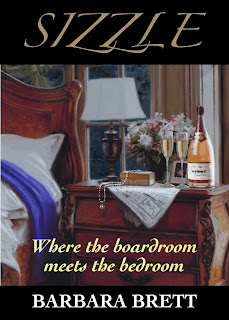 Barbara Brett stopped by to share all the intimate details about her new book. SIZZLE, Where the Boardroom Meets the Bedroom

BOOK BLURB:
She’s the most beautiful and ruthless CEO in the nation. He’s the most dangerous corporate raider in the world. Neither has ever lost a battle in the boardroom—or  the bedroom. Now they’re warring for America’s biggest publishing prize.

SIZZLE—a  novel of breathtaking power and ambition, set against the jet-setting world of Manhattan’s elite!


EXCERPT:
At Ledoyen, Marietta and Craig were seated at a table with an excellent view of the garden. Their wine was poured into crystal glasses, their courses dispensed from Louis XV serving carts. In such an atmosphere, it was difficult not to be warm and cordial, and Marietta sensed Craig's reserve yielding a little with every sip of wine.

She kept the conversation sprightly and flowing, and saw to it that they spoke a great deal about Craig's career and not at all about hers. By the time they were sipping their demitasse, the years seemed to have slipped away, and they were once again sharing special looks and laughter.
Before they left, Marietta turned for a last look at the garden. Craig's gaze followed hers, and he said:
"Everything they say about April in Paris is true, isn't it?"
"Suddenly I have a terrific yen for more chestnuts in blossom. Let's take a walk in the Bois de Boulogne."
Craig smiled indulgently. "Why not? Sounds like a pleasant way to work off some of our excess calories."
It had been ages since Marietta had been in the Bois. For years, Paris trips for her had meant board meetings and boutiques by day and café society by night, but her intuition told her that a stroll together through the park might awaken in Craig's mind fond memories of similar strolls through Central Park. Perhaps it did; he seemed even more relaxed and happy in the sun- dappled woods than he had been in the restaurant. It was his idea to hire a horse-drawn carriage so that they could view in style the lakes and waterfalls and the charming Parc de Bagatelle.
As they passed the nearby children's playground, Craig turned to Marietta and asked, "Have you ever been to the Jardin d'Acclimation?"
She shook her head.
"You don't know what you've been missing," he said, and he told the driver in perfect French to take them there.
Marietta had expected—or hoped—that they were heading for romantic gardens where he'd suggest a stroll beneath shady trees beside a sparkling lake, and was surprised and disappointed when the driver reined his horse before the entrance to a combination children's zoo and amusement park.
Craig paid the driver and helped her from the carriage. "You're going to love this," he said.
She doubted that very much.
She was wrong. The Jardin d'Acclimation was designed to charm both child and adult alike. Perhaps adults enjoyed it most of all, for the true joys of childhood, like so many of life's delights, are never really appreciated until they are forever lost. Marietta and Craig paddled a boat across a clear lagoon, laughed in the house of funny mirrors, tried their luck on the archery range and at miniature golf, ate warm waffles, and fed the animals. She couldn't remember when she'd had so much fun. Or perhaps she could: seventeen years before, bundled up against the cold, strolling hand in hand with Craig, tasting New York City's delights.
Later, Craig whisked her in a cab to the Porte Dauphine. "You've never seen Paris until you've seen this," he said, and gestured toward the Etoile, painted gold and pink in the light of the setting sun.
Marietta caught her breath. "It's beautiful!" she said. But even as the words were leaving her mouth, even as her eyes continued to take in the scene before her, she was aware of a subtle change in Craig. He was no longer gazing in awe at the Etoile. He was looking at her; she could feel it. And she could feel, too, that if she turned to look at him, she'd find the awe still in his eyes, but directed toward her. Sunsets enhanced her charms, silhouetting her fine profile, deepening the coppery tone of her hair. Slowly, her heart pounding, she turned to him. She was right. In his eyes she saw the same desire that had been there seventeen years before.
"I don't want this day to end," she said.
He didn't kiss her, as she had hoped he would, but his gaze slipped down and caressed her lips, then returned to meet hers. "Neither do I," he said huskily. "I'll pick you up for dinner at eight-thirty." 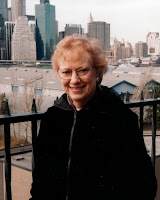 AUTHOR BIO
Barbara Brett’s colorful publishing career includes stints as the editor of True Romance and True Confessions. During that time, she began writing mainstream novels, and after the publication of Between Two Eternities and Love After Hours, she was named vice president and publisher of Thomas Bouregy & Company, where she oversaw Avalon Books, the company’s hardcover fiction for libraries. Later, she established her own company, Brett Books, devoted to hardcover inspirational nonfiction. She is now back to her own writing and delighted to see Sizzle published. She promises to follow it with many more exciting books.