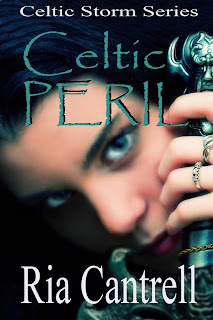 Ria Cantrell stopped by to share her latest release. CELTIC PERIL is a historical time travel romance set in Scotland.

In 1387, the peace of the Highlands is shattered when the young English King, Richard of Bordeaux announces that he will be touring the Northern Territories in what is known as the Great Gyration. All young maidens of marriageable age must be presented to him. Richard is seeking a bride to forge an alliance between England and Scotland. Sir Andrew and Lady Bronwyn Brandham have been requested to entertain the English king and his retinue during the last harvest. Sir Drew's daughter, Jenna, refuses all suitors; especially the likes of the English king. In a willful show of disobedience, Jenna Brandham flees to the Highlands and seeks refuge among her uncles and grandfather of the Clan MacCollum. Her absence puts her family in grave danger of disobeying the king's request. They are desperate to keep the peace and to not anger the Royal guest.

Morag, the healer and chatelaine of the Clan MacCollum knows of a ruse to appease the unpredictable king, but it would mean traveling ahead in time to bring Kiera Campbell back in Jenna's place as a decoy. Kiera agrees to go back in time to help her old friend and to seek forgiveness from the past for her beloved husband, Derek.

Tom Callum has just landed a spot with a prestigious road show called Celtic Storm as the lead singer and front man. When he reaches Scotland to visit his cousin Kiera, he is drawn to seek his heritage and uncover the mysteries of his past. He is fascinated with a painting of a girl who lived more than six hundred years ago. Something about her tugs at his long forgotten memory. Little does he know that he will soon be plunged into a world of intrigue, deception and peril. The past and present collide in an adventure that brings danger at every turn. Only love will give Tom the strength he needs to thwart an attempt on King Richard's life. Tom must save the reputation of the Clan MacCollum and the Brandhams. How can he succeed without destroying what has already been written in history? Will Tom be able to survive his leap into the past? Will he be able to survive his return to the present, only to leave his heart behind?

Ria grew up in the suburbs of Long Island, New York. Her family has promoted her love for the arts, especially music. She learned to read music at a very early age and started singing at the age of four. Ria has enjoyed some very exciting endeavors in the past including competing as a figure skater, dancing professionally as a belly dancer and singing as a classically trained vocalist with auditioned chorales. She also enjoys working as a soloist.

Ria began writing at a very young age and even had some of her early poems published in local literary magazines. Frequently, she would be seen carrying notebooks to scribble many of her stories and poems. With a love of the past, Ria was fascinated with Medieval and Renaissance history and found herself drawn to participate with a reenactment group, The Society for Creative Anachronism, which re-creates the Middle Ages. Since fostering her love of all things medieval, Ria’s stories soon became flavored with Medieval and Renaissance themes.

Ria is a hopeless romantic. She married the love of her life after a long-distance courtship, spanning two continents. She now lives in the sunny tropical paradise of Southwest Florida with her English rock-star husband. The two share their love for music and writing. They perform together locally and they collaborate on writing endeavors. Her husband’s first full length novel, Reflections of Love, is being released simultaneously as Morag’s Tears.
Connect with her HERE

You can also find Ria Cantrell 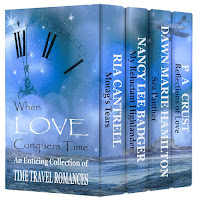 
in the Time Travel Boxed Set
WHEN LOVE CONQUERS TIME