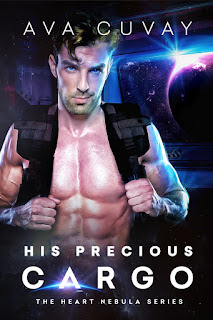 Ava Cuvay stopped by to answer intimate questions about her life and her latest release. Her book, His Precious Cargo, is a Sci-Fi Romance and was released on March 6th. Please tell my readers a little bit about your book.

Ava- Firstly, Nancy, I’d like to thank you for letting me be part of your blog today! I’m thrilled to be here and have the opportunity to chat about my new release. It’s a hot story about a stripper with dreams of being a princess and an intergalactic thief with a freighter of stolen cargo.

At the outskirts of space and away from the rigid control of Central Command, Granger entices Kaedi to break her strict no-lap dace policy. The repercussions force her to pack up and hitch a ride off-world in the same freighter he has hired. They discover a passion hotter than a super nova, but their plans are shattered by the untimely death of the ship’s captain, the duplicity of the co-pilot, and the appearance of Granger’s best-friend-turned-torture-happy-enemy. When Granger’s heritage is revealed, Kaedi believes herself unworthy, but he realizes she is more precious than stolen cargo.

Ava- While on a milestone birthday trip to Las Vegas, I sat poolside with my friend, reading a romance novel and drinking margaritas. I couldn’t even say which book or what author, but when I finished, I turned to my friend and declared, “You know… I bet I could write one of these.”

Being the good friend she is, she lifted her cocktail in silent toast. “I bet you could, too.”

Blame the margaritas, or the Las Vegas influence, but I began writing. It’s taken me six years and four (currently “tabled”) manuscripts, but I finally self-published my first book, His Precious Cargo.

Ava- The reward is two-fold. First, there is the physical realization of the story which began as a niggle in my head. From the words on the page to the cover art to simply holding its weight in my hands, seeing it come to fruition is pretty amazing. The second part is all the friendship and camaraderie I’ve discovered along the way. The romance writer community is so immensely supportive, and I’ve met so many kindred souls here.

Ava- Since I went the route of self-publishing, I don’t have advice specific to acquiring a contract. But would like to cheer “You can do it!” to anyone who wants to write and have their stories published (regardless if you go self or traditional). How to accomplish this goal, I’ll leave to other, more knowledgeable and successful authors… But I would encourage everyone who is working toward being a published author to enjoy the journey as well as celebrate their success. My own journey has been filled with many wonderful authors who have been supportive, encouraging, and instructive. Had I tried to walk this path alone, I certainly wouldn’t be this far along (heck, I’d be wandering in circles at the very beginning), and I wouldn’t have made so many friendship with so many awesome authors!

Please Share three fun facts about you that most people don’t know.
1) I danced ballet and modern for ten years and into college. My natural turn-out is all I have left to show for it! J
2) I was a Junior Miss Beauty Scholarship pageant winner in High School.
3) I think frogs are cute.

Ava- The next book in The Heart Nebula Series: Love and the Corps. Coming soon, er, coming as soon as I finish edits! It won the 2015 Over the Far Side Contest in the Sci-Fi/Futuristic category, and it’s hopefully even better.

Excerpt from His Precious Cargo
Granger caught up with her several steps later. When he moved to stop her, she whirled, crossed her arms over her chest again, and waited with barely contained anger.
He stared at her battle stance for a moment. His eyebrows lifted. “I’m not Cal. And I know it hardly needs to be said, but I don’t like how he looks at you.”
Her anger fled instantly. Her arms dropped to her side and she glanced toward the galley. “That makes two of us.”
“You will avoid him like Klutha-9 when you can, and keep your guard up when you can’t. And remember what I taught you to do with your hands.”
She wasn’t one for taking orders, but liked that Granger was concerned for her. Since his advice was reasonable, she decided not to argue.
“I remember what to do: hit his nose, poke his eyes, box his ears.”
“No, the part where you keep them on me and only me.”