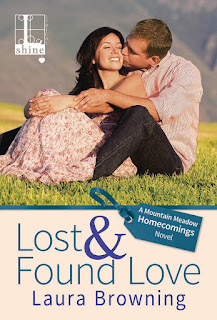 Back Cover: Welcome to Mountain Meadow, Virginia, where homecomings lead to happily ever after…

Tabitha MacVie has come to Mountain Meadow to meet the sister she never knew, and find the family she longs for. What she discovers is a close-knit community determined to close ranks against the new art teacher, especially once she catches the eye of the town’s most eligible bachelor. Tabby tries hard to keep Joe Taylor at a distance.  But staying away from the handsome preacher isn’t easy once he opens his arms to her….

Tabby is the answer to Joe’s prayers. Too bad the spirited beauty believes she doesn’t belong in Mountain Meadow—or with him.  Still, Joe can’t resist offering her shelter against the local gossips, or giving her a strong shoulder to lean on when her family hopes are dashed.  And when Tabby’s life is suddenly on the line, Joe will do anything to save the woman who stole his heart.

Excerpt
Joe’s glance slid to the house next to his. He glimpsed a tall, slim woman lifting a bike and setting it on the veranda before she disappeared indoors. Ah. That must be the elusive Tabitha MacVie, not at all old it seemed. In fact, what he’d so briefly glimpsed had made his breath catch. Though her hair had been back in a braid, Joseph could tell that Tyler hadn’t exaggerated, it was long and nearly as black as her cat.

He wondered if Miss MacVie ate spaghetti or meatloaf. He hoped not. As the evening wound down, his eyes strayed to the house more and more. When darkness fell and he saw the only light was once again in the third floor room, he was disappointed. What was she doing up there? He was tempted to grill Tyler, but that would be a bit too obvious. Not to mention pathetic.

With effort, Joe put her from his mind and returned to his house. He had a lot to get done Saturday, plus rehearsing his sermon one more time, and he didn’t need to be thinking about the mystery woman. But despite his promise to himself, when he got up the following morning to run, his eyes settled on her back door. The first thing he noticed was the bike was gone. Was she out riding again?
Joe stretched and began the longer run he normally saved for Saturday mornings. Five miles before he came home, showered, then stopped in at Tarpley’s to do his grocery shopping. It was a weekly ritual.

While he ran, he amused himself with ways in which he could meet his new neighbor. He envisioned offering her help getting settled, but she’d probably already done that. He pictured heroically rescuing her from something—maybe a burning house. No. He certainly didn’t want to see her house burn down. Maybe…

In the end, he met her in an aisle in Tarpley’s when they both reached for the same box of macaroni and cheese. It should have been the most mundane of ways in which to encounter an attractive woman, except that as soon as their hands touched, she stumbled back with a startled gasp and clutched her hand within her other as if she’d been burned.

Joe got that. He felt the same way as he stared into eyes as wide and golden as his next door neighbor’s cat. Her hair was only a shade lighter than the cat’s. This was the elusive Miss MacVie. She was tall, he noted, nearly eye-to-eye with him, and he was a shade over six feet. He smiled, but received only that shocked look in return.

Resisting the temptation to see if he’d spilled something on himself or had a smudge of grease on his face, he held out his hand. She didn’t take it. “I’m Joseph Taylor.” He persevered, hoping to high heaven he didn’t blush. “Most folks call me Joe. I believe we live next door to each other.” When she still didn’t say anything, he continued. “Most of the time people say their name back to me. Have I upset you in some way?”

Finally, as if she pulled herself out of a trance, she shook her head. “No. I’m Tabitha MacVie—Tabby.”

He was still smiling, he realized, feeling awkward, but she had such a wary, watchful look on her face that he suspected she already knew most people called him Joe, just with Pastor with a capital P in front of it. It looked like she fit firmly in the first category of women, the ones who wanted to run like hell.