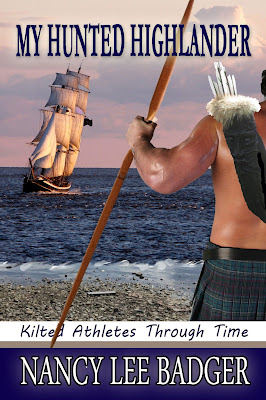 Pirates, the long bow, and a quiver? You'll have to read the book to find out why I included them on my cover... *


Plucked naked from the North Sea, bruised and nearly drowned, Niall Sinclair wakes bound to the mast of the pirate ship, The Black Thistle. Hiding his identity, and brutalized by the first mate and other seamen, their captain comes to his aid. Her identity, and gender, are a surprise, and his physical reaction to her makes him nearly forget his need to escape, and return to his clan.

When kidnapped from her shipbuilding business in modern day Portsmouth, New Hampshire, the last place Blair MacIan figured to end up, was at the helm of a pirate ship in 1603 Scotland. With her abusive husband dead, and the ship, the crew, and their people under her care, the last thing she needed was to fish a naked man from the sea. His ravaged face and ragged sandy hair could not detract from his magnificence, and she sensed in him, a means for her own escape.