Nancy: Author Marie Elena Alonso-Sierra stopped by to share her latest release, THE COIN, a Romantic Suspense/Thriller. Enjoy the FREE excerpt AND leave a comment for the GIVEAWAY!
Welcome!

Gabriela took it and averted her face, pretending to look at the passing view.  Richard wasn’t fooled.  He knew she wasn’t watching her surroundings.  “Gabriela.  We have to talk.”
“Like hell we do,” she answered, without turning her head.
“Yes, we do.  You can’t go on like this all day, pretending I don’t exist, biting my head off every time you answer my questions.”
She shrugged in answer and kept staring out the window.  They passed an ancient chimney stack from an abandoned perfume factory and rounded their way up past the old railway station.  As they climbed higher, the traffic became thicker with tourist buses, cars with foreign plates, and impatient locals.  They would be crawling along before they ever reached the road turnoff.
“Listen.  What happened last night shouldn’t have—”
“You’re damn right it shouldn’t have happened,” she told him viciously.  “And it won’t happen again.”  She turned sparkling, angry eyes at him.  “Last night, I was a fool to allow you to even touch me.  And you, chivalrous person that you are, took full advantage of a weak moment.”
He ground the car gears as the car crawled even slower, inching its way around a traffic circle with an iron sculpture of a rose cradling a perfume bottle in its center.  The fragile hold on his temper snapped.  “Damn it to hell, Gabriela.  Do you think this is easy on me?  I’m a man who’s always taken what I’ve goddamn wanted, without asking permission.  Look at me, for God’s sake.  For the first time in my life, I’m considerate of a woman, careful not to wound your damn moral sensibilities.  I’ve never given a shit about what the opposite sex has thought of me, or wanted, or whether my actions have pleased or hurt.  I’ve never been in love, Gabriela.  Do you think I enjoy feeling weak and vulnerable?  Do you?”
“No,” she admitted, and looked down at her hands.  She couldn’t fool herself.  She was lashing out at him to better protect herself against her growing attachment, her irrational love.  It was her only defense.
“I love you, Gabriela,” he said, and felt her wince at his words.  “I’m sorry about last night, but I don’t regret it happening.  I’d be a hypocrite if I told you otherwise.”  He shifted to first and managed only an inch.  “What’s done is done.  That’s no reason for going at each other’s throats for the remainder of the day.  Can we at least act civilized toward each other until I can have Maurice finish things off?  That way, I’ll finally be out of your hair and you can go back to your life the way it was.”
Outside the car, life seemed to be pulsating.  Inside, it was holding its breath.  “My life can never be the same again,” she said low, with heartrending sadness.
Richard clenched his jaw, recognizing the truth in her statement.  What comfort could he offer?  The situation could never be repaired.  He was in the same shoes. 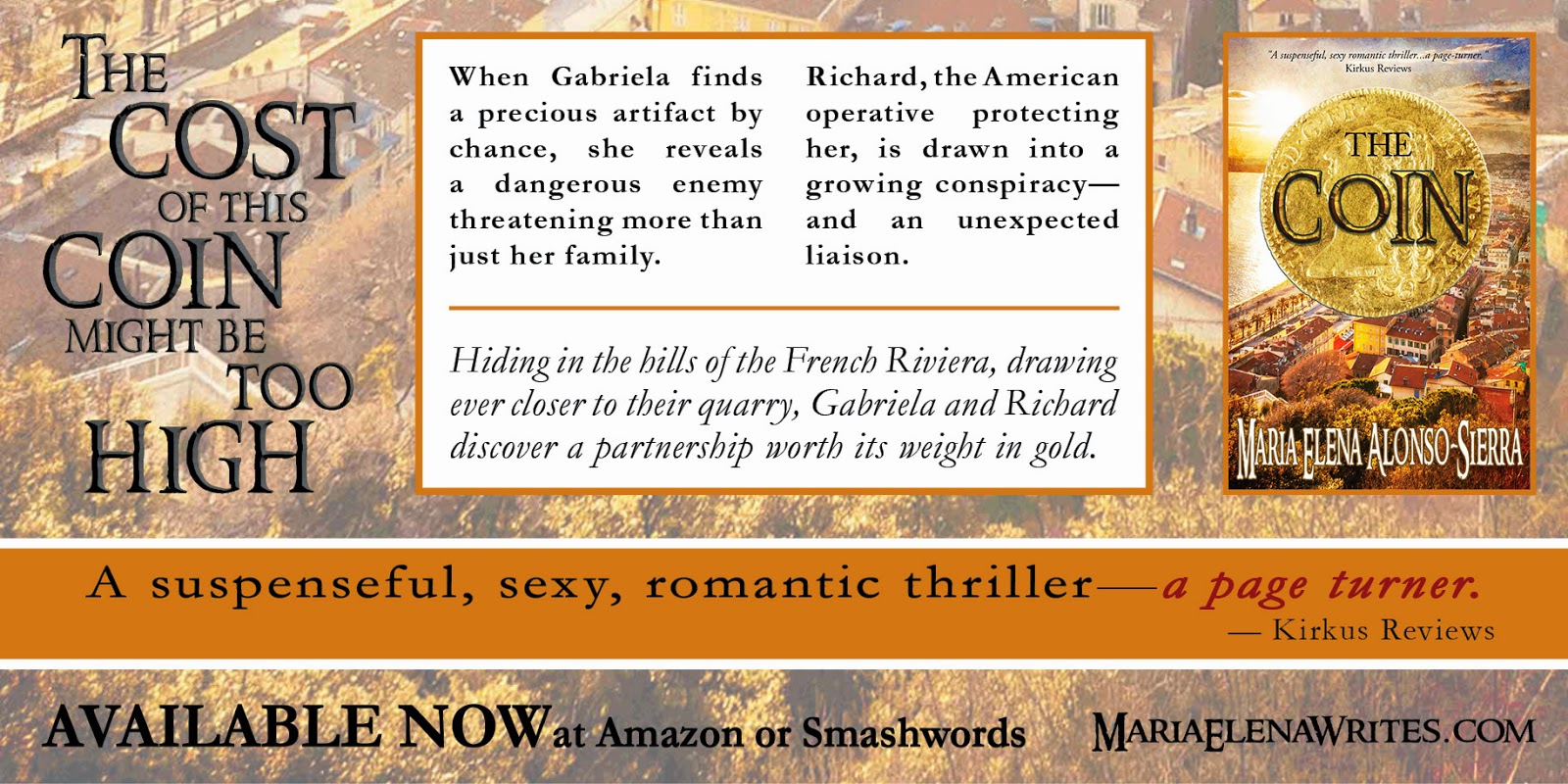 GIVEAWAY!
Leave a comment for a chance to WIN
a Signed print copy
OR “Authorgraphed” Kindle version
OR epub version of The Coin; bookmark; rack card.
*USA residents only
**You MUST include contact info (This blog does not collect reader info)
Book Blurb
The cost of this coin might just be too high... When Gabriela finds a mysterious coin in the French Riviera, she is thrust into a struggle between governments, terrorists, and madmen, all seeking vital information she doesn't know she has. Richard, the intelligence officer assigned to protect her, has all he can do to keep her safe--and keep the stirrings of his heart from endangering them both.

Where can readers buy your book?
Smashwords     Amazon     iTunes Maria Elena Alonso-Sierra is a full-time novelist based in North Carolina. With Cuban roots, she has lived in many countries, including France, the setting for her first novel, The Coin. She speaks English, Spanish, French, Italian, and German, and reads Latin, Middle English, and old French. She holds a Masters in English literature, specializing in medieval romances, and is currently an active member of the Carolina Romance Writers. She loves to hear from her readers, and always hopes to open a dialogue with her fans.Connect with the author here: