The Cat Made Me Do It by Christina Westcott 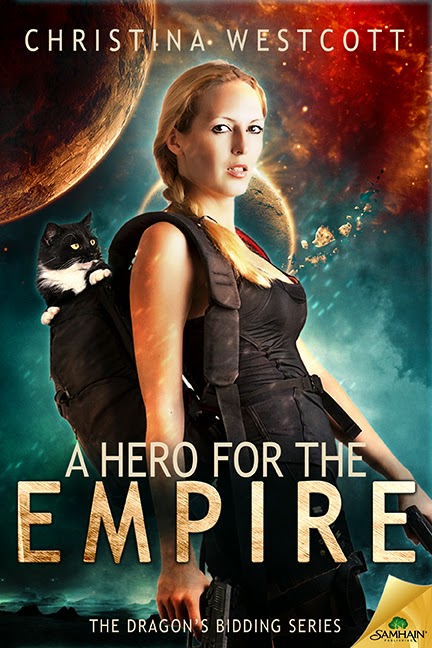 Nancy: Christina stopped by to talk about two loves we have in common: Writing romance...and CATS! Take it away, Christina!

Since the long ago day I discovered Space Cat Meets Mars in my local library, I’ve loved science fiction and fantasy. So I guess it was natural that when I tried my hand at writing, I’d choose space opera. My stories were always less about the technology and more about the people, how they interacted and cared about each other—even if some of them were aliens. Sure, there was adventure and danger, but my characters were often motivated by the emotions they felt for each other. They wanted to save the universe, but more importantly they needed first to save each other, because they were in love. I labored for years, receiving many letters from editors. You know the ones—“We liked this, but…” Eventually I found some success in writing magazine articles, but fiction remained my elusive first love.

Once again, a cat stepped in to show the way. In my local Barnes & Noble, while perusing the science fiction section, I came across a book with a cat on the cover. I decided to take a chance on it. It had cats in it; that alone was worth the price. It turned out to be the first science fiction romance I’d ever seen. The echoes to my own stories were astounding and heartening. Not only did it have adventure, space battles (and of course cats) but it had love. And (gasp) sex scenes, right there on the page—actually no, they were usually in bed.

Now my long literary pregnancy is over and those chance encounters with cats have led to the release of my first SFR (Sci-Fi Romance) this month, A Hero For The Empire. Are there cats in it, you ask? Bet your whiskers.

BLURB:
Cybernetically augmented Kimber FitzWarren has been given the task of locating a missing military icon, Arianne Ransahov, but the only person with a clue to the woman’s whereabouts is mercenary, Wolf Youngblood. The Empire just attempted to assassinate him because of this knowledge, so when Fitz shows up in his bedroom at 0-dark-30, he’s less than happy to see her. She explains she isn’t there to kill him, but to plead for his help. Help he’s reluctant to give—until another assassin comes after both of them.

The two set off on their quest along with Fitz’s sentient starship, Lizzy, and Wolf’s telepathic cat, Jumper—who’s a cross between Chewbacca and Garfield. The action is non-stop, with our heroes escaping one Imperial trap only to face another danger, then another. But there is enough time for the pair to fall in love. Hero for the Empire is good, old-fashioned space opera in the style of Star Wars, Firefly or this summer’s blockbuster Guardians of the Galaxy.

I’ve always thought that when man went to space, cats would follow him. Their lithe bodies are built for flying in zero gravity and their paws grip with the tenacity of Velcro. Now if we can just figure out what to do about that pesky cat litter in zero gee…

Cat have always gone adventuring with mankind, accompanying us on voyages of discovery, riding on merchant vessels and have even following us to war. There’s the story of Oscar, the German cat who was aboard the battleship Bismarck when it was sunk in 1941. He was rescued by a British ship, which was itself sunk four months later. Only to be rescue again and—you guessed it—sunk again before the year was out. Eventually, his name was changed to Unsinkable Sam and he was retired to an old sailors home in England.

In that tradition, the cats in my imaginary worlds, ride aboard starships to protect their crew from frainies, a particularly nasty mind parasite. Fearless space cat, Jumper, does battle with The Enemy to save the hero and heroine.

EXCERPT:
Now The Enemy had come aboard this ship and wanted to kill his person. That would not be tolerated.
Five fuzzy globs of light drifted out of the common room. Jumper saw them as dirty gray spheroids of wiggling tentacles tipped with organs to locate the thoughts of their prey. His green eyes narrowed, a hunter’s growl rumbling in his throat.
The powerful muscles of his hind legs hurled him among them, claws slashing, jaws crushing. He hit the deck and rebounded, tumbling and slaughtering until only one remained. It flashed away and down the stairs to engineering. Jumper spit out the foulness of his last kill and soared after it.
He grabbed the handrail on the stairs, slowing his forward momentum and peered down into the room. A glowing ball of frainies a meter across churned in mid-air. Was it a trap? He’d heard stories of cats swarmed by The Enemy and killed, but were they true? Or only cautionary tales to keep high-spirited kittens in check?
The puff of fur on his behind twitched as he tried to lash his non-existent tail. Jumper leapt, screaming his battle cry. He was a Gold Dragon and this was, as the mercenaries liked to say, a target rich environment.

BIO:
As long as she can remember, Christina Westcott has had imaginary people living in her head. Cyborgs, mercenaries, wizards, dragons and cats. Lots of cats—shape-shifting cats, talking cats and telepathic cats. After continual nagging from this bizarre cast of characters, Chris decided to turn them loose on the world in her science fiction and fantasy stories. She’s been an incorrigible collector of not only books and cats, but of experiences, riding in rodeos, driving racecars and flying airplanes. All good experience for becoming a writer.

She lives in sunny Southwest Florida where she delights in telling all her friends “up north” the local temperature in the middle of January and she proudly wears the moniker Crazy Cat Lady. She’s currently at work on the second book in the Dragon’s Bidding series, Cypher, where we learn what happened the day after the first book ended.

You can catch her on her website at christinawestcottauthor.com or on
facebook.com/chriswestcott33.

Buy A Hero for the Empire at:

Email ThisBlogThis!Share to TwitterShare to FacebookShare to Pinterest
Labels: A Hero for the Empire, cats, Christina Westcott, on writing romance, Samhain, sci-fi romance