It’s All About the Cover! by Sherry Ewing

Nancy: Now that I have started to create my own book covers, Sherry Ewing's article is timely, and I thank her for stopping by! 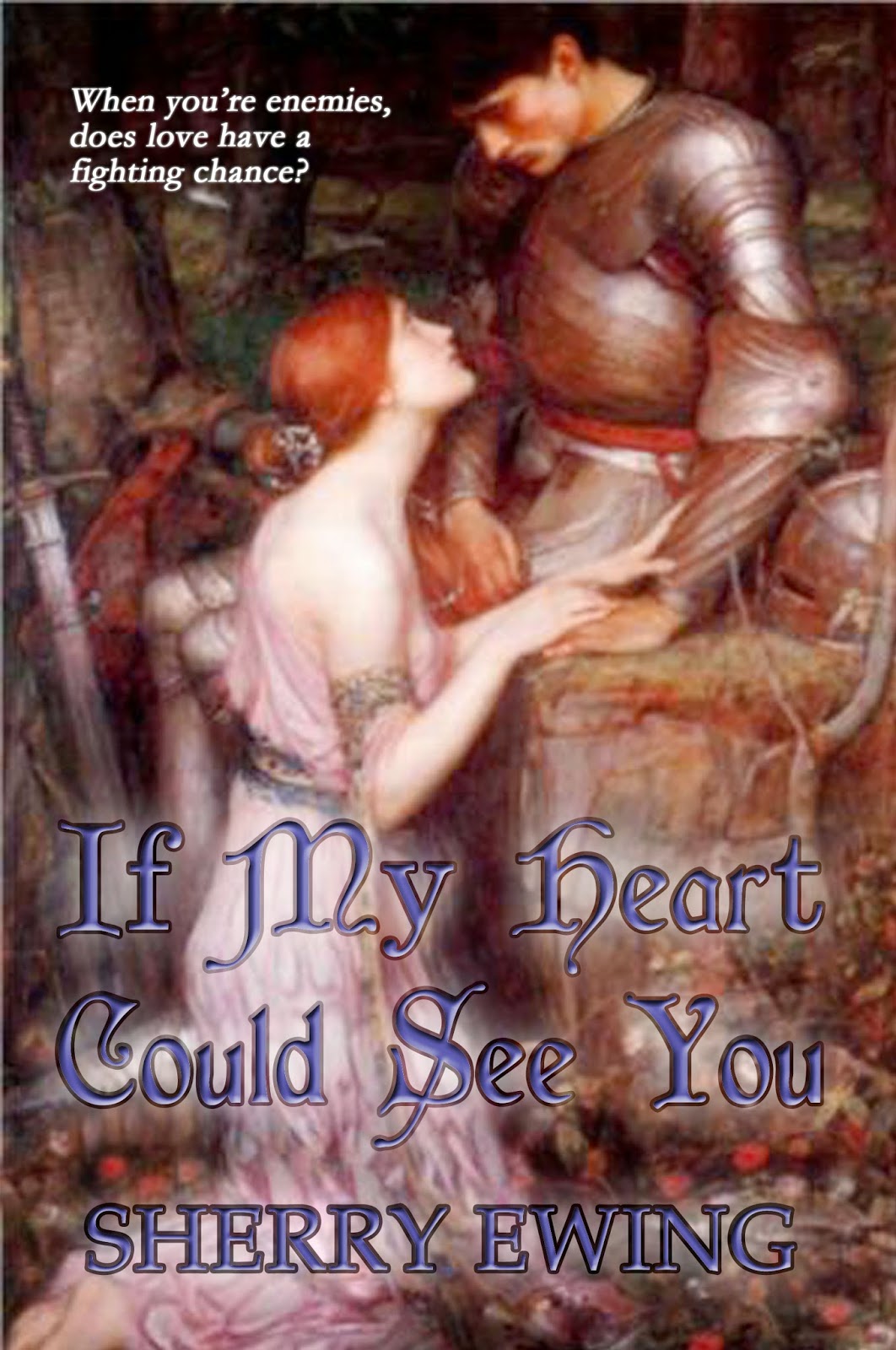 Sherry: What is it about the cover of a novel that resonates with a reader enough that they’ll take the next step to see if they’re interested in the actual story? Every author wants their cover to stand out in an endless sea of books available on the internet or a book store. The path to getting there is a tough one.

As an Indie author, I have the luxury of complete control over what my cover’s look like. That’s probably a good thing, since I’ve learned that I’ve become a bit of a control freak during the whole process of launching my debut novel. But let me also tell you, self-publishing is a lot of work and the only person I can rely on to get the job done is me. Is it worth it? My answer is yes!
When the storyline for If My Heart Could See You started to pop into my head, there was really only one choice I saw for my cover. John Waterhouse’s Lamia squeals romance no matter that the story behind the actual painting is horrific. It’s Greek Mythology, so probably enough said there. Because this painting was in the public domain, I was able to use it. Typing that line was far easier than developing an actual cover that would work. I am a writer, not a cover designer, and trying to fumble my way around Photoshop was exhausting to the point that I threw up my hands in frustration numerous times. No matter how many instances I yelled “I’m giving up and chucking the whole idea,” I continued coming back to try again. Apparently, I was on a mission.
This wasn’t just about slapping my name, title and tagline onto the cover and calling it good. This was about making it look professional. I also had to do some editing to remove the snake skin the knight was stepping on. It was also wrapped around the heroine’s leg and bottom of the picture. In the amount of time it took me to finally get it good enough that I was happy with it, I could have written at least three more books. I swore I’d never do another cover again and leave it to the professionals. Now, I’m trying to design the back of my next release. I knew I’d eat those words.
Was it worth it? You tell me. I still remember waking up that Saturday morning in July just two days after my paperback was released. Prior to that, the eBook was bringing in a few sales that totaled maybe fifty. I thought, “How nice is that? All my friends and family are buying my eBook.” Reaching for my phone that morning, I opened the sales dashboard and rubbed my eyes. I must have refreshed that page at least three times before putting on my glasses thinking something was broken at Amazon. But no…I had 70 sales and it was only 8:00 in the morning! I ended that day with 137 Kindle downloads that put me #3 on Amazon’s top ten bestseller list among several others. Oh happy days!
Perhaps my patience and persistence paid off after all. There’s only one reason I believe my book hit those bestseller charts in the first place. I blame it all on my cover. Three to five seconds…that’s it. It’s all the time an author has to grab a reader’s attention enough that they’ll click on your tiny thumbnail on their computer or walk across that bookstore and grab your book. You had better make that cover a good one.
Three things readers might not know about me:
1) I had seven years of piano lessons when I was growing up. It’s one of the regrets I have that I didn’t keep up with it because I was pretty good.
2) An introvert at heart, I feel out of place in large crowds where I don’t know a lot of people, if anyone at all.
3) I love the ocean but don’t want to swim in it. Give me the sandy stretch of beach and I’ll walk for hours.
Book Blurb for If My Heart Could See You:
When you’re enemies, does love have a fighting chance?

For Amiria of Berwyck, defeat does not come easily as she watches her home and clan being ripped asunder. When the very enemy who has laid siege to her home demands her fealty, she will do whatever it takes to protect her people including a hastily concocted ruse that quickly begins to unravel. All too soon, she starts to question whether she can forgive herself for betraying those she has sworn to protect.

Dristan of Blackmore, champion knight of King Henry II, has a reputation to uphold as the Devil’s Dragon. After his invading army conquers Berwyck castle, he sets out to manage the newly claimed estate by training its knights in the art of proper defense. At first, everything appears as it should be, or is it? Betrayed by those he believed he could trust, he must first set aside his anger before he can make room in his heart for love.
Together they are tied by an unspoken bond. As they begin to rebuild the land and unite their people, forces beyond their control attempt to tear apart their fragile truce and only time will tell if love will forever bring them together.
Excerpt:

“I do so love a challenge,” he argued humorously.
“Do you?” she asked sarcastically. “And what, pray tell, do you achieve if you should know my name, my lord?”
Dristan looked on her with a slight smile set upon his handsome face. “Why I achieve the name of a beautiful woman I would like to know better.”
Amiria contemplated him again, wondering at his ploy. “And how know you I am beautiful with just one glimpse of my face?”
“Anyone with eyes in his head could tell, fair damsel, you are indeed a fine looking woman.”
“They say beauty is not everything, my lord Dristan. Perchance I have a shrewish nature, as I have been told such afore.”
“Somehow, I think not.”
“Do you?” she repeated the same words of but seconds ago.
He interrupted her. “Besides, ’tis not fair you should know who I am, but I am not granted the same.”
“Any and all would be a fool not to know the Devil’s Dragon of Blackmore now claims his lair in Berwyck Castle.”
“Then you have heard of me and my reputation has proceeded me,” he cajoled.
“Aye, my lord, I have indeed knowledge of you.”
“I see you do not fear me, as some do upon first encountering me. Why is that, I wonder, when you in truth do not know my nature?” he questioned honestly.
“I fear no man,” she answered, as she raised her head defiantly with a flip of her head, “or beast for that matter!”
Dristan threw his head back and laughed. It sounded pleasant to her ears. “Well said, damsel. Mayhap in you I have finally met my match! Still you have me at a loss, mistress, besides not giving me your name, that is.”

Currently, I have the eBook for my historical time travel, For All of Ever, up for pre-order at the major retailers with a November 20th release date. It was a lot of fun to write, so much so, that I had to give Katherine and Riorden a second book called Only For You. I just finished the last round of 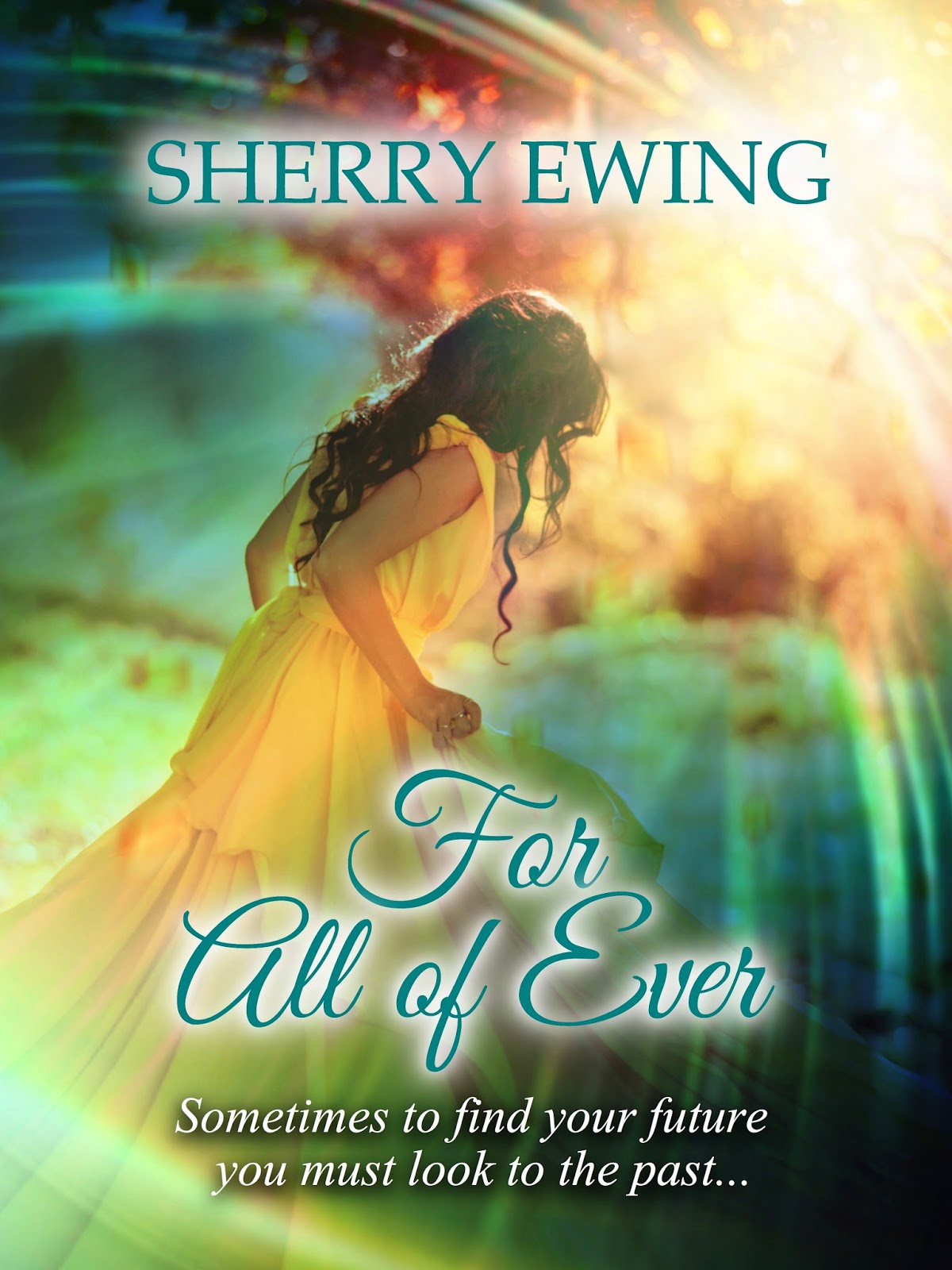 edits and hope to have it published by the beginning of 2015. I am currently finishing my work in progress entitled A Knight to Call My Own that continues the MacLaren saga with Lynet who is the youngest daughter from my debut historical If My Heart Could See You. I also plan to jump into the National Novel Writing Month (NaNoWriMo) challenge in November as I have Aiden’s (Amiria’s twin) story taking shape inside my head. As you can see, my writing keeps me very busy and I still hold a day job too!

A little bit about the author:

Sherry Ewing is an Amazon Bestselling author who writes historical and time travel romances to awaken the soul one heart at a time. Her debut historical romance, If My Heart Could See You, hit Amazon’s top ten bestseller list for the eBook only two days after the paperback release. Always wanting to write a novel but busy raising her children, she finally took the plunge in 2008 and wrote her first Regency. She is a national and local member of Romance Writers of America since 2012. Her second book, For All of Ever, is available for pre-order and she is currently editing its sequel, Only For You. When Sherry is not busy writing, she can be found in the San Francisco area at her day job as an Information Technology Specialist.

You can find more information
about Sherry Ewing and her book
If My Heart Could See You at:

Email ThisBlogThis!Share to TwitterShare to FacebookShare to Pinterest
Labels: book release, For All of Ever, If My Heart Could see You, Indie Author, making book covers, Sherry Ewing