Write From the Heart by Cynthia Owens 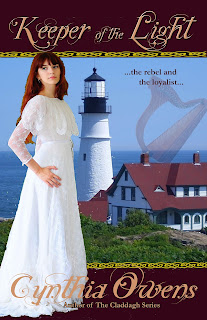 Please Welcome author Cynthia Owens as she shares how she writes...from the heart.

We’ve all read it, or heard it at writing conferences. Any writer, whether a beginner or a multi-published author, has heard those words before: “Write from the heart. Write what calls to you, write what tugs at your soul.”


The words are true.


At least, they’re true for me. All of my books are about the things that have touched me deeply.


My first novel, In Sunshine or in Shadow, is about a place and a people that are close to my heart – Ireland and the Irish. I’ve been in love with all things Irish ever since I can remember, and when I settled down to write seriously, I didn’t even have to think about it. I had to write about Ireland. And since the Irish are known to be survivors, I wrote about Ballycashel, a tiny the west-of-Ireland village, and its survivors of famine and tyranny.


Today I’m still writing stories from the heart. Keeper of the Light, my new release from Highland Press, is a prime example.
When I first conceived The Wild Geese Series, I knew the heroes would be Irish. Five boys who met on a coffin ship grew up together in the New York City of immigrants and crime, and survived to fight in the American Civil War. Originally, I’d planned for each of their stories to take place in New York City.

Then I met Cathal Donnelly…

A story teller and a singer of songs, a dreamer of dreams, Cathal has a rebellious streak and a deep bitterness born in the far-off days of Ireland’s Great Hunger. A restless man, he’s never been able to settle down, and after the assassination of President Lincoln, he becomes involved with the Fenians, whose goal is to free Ireland from the British yoke.
That’s when I decided Cathal had to become involved in the plot to invade Canada.

And that’s when I decided the story would be set on a fictitious island, just off the coast of New Brunswick.

I thought long and hard about using this setting. I wasn’t sure if Canada might not seem to “foreign” to appeal to readers (I’d been criticized about this before). But the pull of the story was too strong, and eventually I decided I had to listen to my heart.

And I couldn’t be happier about the way the story turned out. Not only was I able to showcase some of my favorite things – Irish history and mythology – but I was able to tell the story of a little-known but vitally important piece of Canadian history, one that resonates even today.
Heck, I even threw in a ghost for good measure.


It’s been an absolutely amazing year for me. Since December of 2012, I’ve had three books released: Playing For Keeps (Book III of The Claddagh Series), and the first two books of the Wild Geese Series, Deceptive Hearts in July and Keeper of the Light in October! I’ve hardly had a chance to take a breath!


But…in the meantime, Book III of the Wild Geese Series, My Dark Rose, is on my editor’s desk right now. My Dark Rose is Dary Greely’s story. Tragedy has left this easy-going but ever loyal man bereft, but a beautiful black-haired Irish rose with the voice of an angel just might be able to heal his heart. And for those of you who are fans of my Claddagh Series, don’t worry. There are many more stories for the people of Ballycashel on tap. Right now I’m working on Everlasting, Shannon Flynn’s story, and Wishes of the Heart, Tom O’Brien’s story. I couldn’t leave the people of Ballycashel, whom I dearly love, behind.
BOOK BLURB
…Like the Wild Geese of Old Ireland, five boys grew to manhood despite hunger, war, and the mean streets of New York…
She was everything he despised…but he didn’t know it
Cathal Donnelly washed up on the shores of an Atlantic island one stormy night, with no memory of who he was or why he was there. But is his lovely rescuer his salvation…or his doom?
She dreamed of a very different life
Laura Bainbridge has spent her entire life on tiny Turtle Island, but she dreams of a Season in London and a presentation to Queen Victoria. Can a handsome Irish stranger with a golden tongue and a disturbing past change her heart and convince her to stay?
As Cathal’s memory slowly returns, both he and Laura must come to grips with his painful past…and fight for a future free of hatred and loss.
Nancy: Will you share an excerpt?
He moaned again, but made no further response. A cloud skimmed across the moon and away again, leaving her with an unimpeded view of his sleeping face. She caught her breath.
He was beautiful.
His skin was fair but for the nasty gash at his temple. A livid scrape slashed across one high cheekbone. His long black curls flopped wetly over his forehead, and Laura fought the urge to brush them back…
His brows were long, dark slashes against the pallor of his high forehead, the two vertical lines between them the only sign of his conflict. A soft moan spilled from his full lips, making her wonder what it might be like to be kissed by that oh-so-masculine mouth.
Her fascinated gaze roved over the freckles sprinkled across his long straight nose, the tiny dent in his chin that surely must deepen into a cleft when he smiled. He shifted restlessly, drawing her gaze to the broad shoulders encased in white wool, down the long body and along his well-muscled legs. His hands were large and square, calloused and bleeding. One of them clutched a canvas bag in a death grip.
“They’re coming for us.” His deep voice vibrated with raw anguish. “We’ve got to…get out of here. Now!” He tried to rise, but fell back with a helpless half-groan.
How can my readers buy your book?
Amazon    Kindle    Barnes and Noble
Nook    Smashwords    Chapters
The Book Depository    Booksamillion
Foyle’s    Powell’s Books
More about the author
I believe I was destined to be interested in history. One of my distant ancestors, Thomas Aubert, reportedly sailed up the St. Lawrence River to discover Canada some 26 years before Jacques Cartier’s 1534 voyage. Another relative was a 17thCentury “King’s Girl,” one of a group of young unmarried girls sent to New France (now the province of  Quebec) as brides for the habitants (settlers) there.
My passion for reading made me long to write books like e ones I enjoyed, and I tried penning sequels to my favorite Nancy Drew mysteries. Later, fancying myself a female version of Andrew Lloyd Weber, I drafted a musical set in Paris during WWII.
A former journalist and lifelong Celtophile, I enjoyed a previous career as a reporter/editor for a small chain of community newspapers before returning to my first love, romantic fiction. My stories usually include an Irish setting, hero or heroine, and sometimes all three. I’m the author of The Claddagh Series, historical romances set in Ireland and beyond. The first three books in The Claddagh Series, In Sunshine or in Shadow, Coming Home, and Playing For Keeps, are all available from Highland Press. Deceptive Hearts, the first book in The Wild Geese Series, has just been released, and Book II, Keeper of the Light, will be released in October, 2013.
I am a member of the Romance Writers of America, Hearts Through History Romance Writers, and Celtic Hearts Romance Writers. A lifelong resident of Montreal, Canada, I still live there with my own Celtic hero and our two teenaged children.
You can find more information about Cynthia Owens
and my book Keeper of the Light, by visiting:
WEBSITE     FACEBOOK     TWITTER