Sarah J. Pepper stopped by to share a fantastic announcement: her latest book, Death of the Mad Hatter, is available starting TODAY! She shares a little about this fantasy romance and herself...

***WHITE RABBIT DOOR PRIZE*** $25 Amazon Gift Card! To enter: join the Death of the Mad Hatter's release day party event and invite as many people as you wish! (here's the link)


When your friends join, just follow the instructions in the top post to enter the giveaway! The person who has the most votes WINS THE WHITE RABBIT DOOR PRIZE!! Thank you for participating and hope to see you there! :)

Will you share some encouraging words for authors still struggling for that first contract?
Bubble wrap yourself. There are going to be hard times, bad reviews and sleepless nights but for all the hard times there are good ones. So make a happy folder

What is your writing routine like?
Let my characters do whatever they want...(okay, this may need an explanation, huh) A long, long time ago I penciled down my synopsis and idea in great detail before writing a story. And within five sentences, my characters would hijack the novel and do whatever they wanted. And it's not like they do small changes to my plot. I once was writing about the Chicago mafia, and the novel ended up being a romantic story about aliens. So, I've accepted this as my writing style and let the characters "talk" to me. It's better this way, tho because I have no idea how the novel will end so its always very exciting for me too!

My readers would like to know when you started writing toward publication, and did you have several manuscripts finished before you sold? If so, did you send them out yourself? Why have you become a published author? Do you have any rejection stories to share? Here’s my story about how my imagination hijacked my life and pushed me into the writing biz….
My grammar is worse than par, and my spelling would suggest that I have some form of alphabet turrets. So to be an author was sooooo far away from the realm of possible career choices. I hated English class and thought my teacher was out to get me. I stumbled onto a collegiate magazine contest (my piece about basic training was submitted by my English professor) Surprise surprise, I won the descriptive essay. But even then I was more concerned with my bachelor degree in Exercise Science. In a world full of dumbbells, spell check was not a big part of my life…


My idea of writing didn't start until a dear friend forced me to watch Twilight with her. Sparkling vamps? Give me a break. But I humored her, thinking that any night I had an excuse to shove popcorn down my throat was a good night. Within three days following the movie I finished the first two books. Soon after I found a few different authors specializing in the sci-fi/fantasy realm and read their works. Days turned into months about as quickly as I turned each page in the books I finished. Soon I had a dilemma. My favorite authors weren’t coming out with their newest works for another several months. A light bulb went off in my head…


Without getting into the specifics, my first novel was a monstrosity at 174,000 words. It was wonderfully boring and had no personality. I can’t tell you how many times I revised that baby until it shined with dynamic characters, unexpected twists, and unbelievable addictive love scenes. I cut the novel in half with all my edits.


I bought the “Getting Published for Dummies” book and put my nose to the grinder. After whipping up a query letter, I sent it out expecting to get loads of offers… I received over 300 “no’s” in the months to follow. Knowing I had a great premise, I sat down and really took a look at my first sentence and synopsis. If I was a surgeon, I’d have been covered in blood. With as much as I edited, altered, and triple checked the first sentence, I was mentally exhausted. Changing the rest of the letter took some convincing and loads of chocolate.


Two years ago, I didn't want to tell a soul I was writing. Eventually I told my husband and a group of select friends – but most of my hard work was behind the scenes to friends and family. Back then my goal was to get just one “yes" from a publisher. Soon that transformed into wanting to hold my book in my hands. Months transformed into years.


My irrational “pipedream” went international. Death of the Mad Hatter will be my tenth novel thus-far. Countless times I've taken a break from punching away at my keyboard and have thought, “Me – a writer?”


What’s next for you?
Ugh, I blame my characters for making a mess of my Fate Trilogy. So, I really need to fix everything they did.


Please Share three fun facts about you that most people don’t know.
hmmmm, my favorite tea is Earl Grey because of a school girl crush I had on John Luke Picard (Star Trek). I HATE chocolate Tootsie Rolls. Half the books on my bookshelves I haven't read.


BOOK BLURB for Death of the Mad Hatter 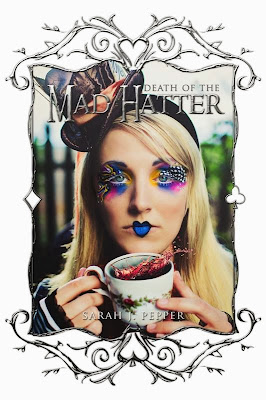 If the king loses his head, then the Queen with a Bleeding Heart would rule the Red Court until Time ceased to move forward. When a second carried on for infinity, every creature in Wonderland would tip their Hat to the misfit girl with a Boy’s name (or was it a boy with a Girl’s name?) who’d end the Reign of Terror. However, it all hinged on the One-Eyed Hare being able to convince an uninspirable Heir that the impossible was indeed possible—like stopping time—and that Love was worth a Beheading.


Heads would Roll…Hearts would Break…In the end, would it matter who Reigned?

How can my readers buy your book?
It will be on Amazon, iTunes, Barnes and Noble as well. Here's the pre-order link!


BIO: I specialize in dark, paranormal romance – think “happy ever after” but with a twisted, dark chocolate center. Real-life romance isn't only filled with hugs, kisses, unicorns, and rainbows. True-love can be more thoroughly described in times of darkness and tribulation. It’s in those harsh moments where you see what a person is truly capable of – both the good and bad. Sometimes prince-charming isn't always on time, and the glass slipper is a little snug. However, it doesn't mean Charming is not Mr. Right, and who says every shoe is the perfect fit?