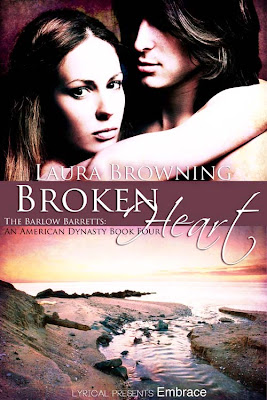 I invited author Laura Browning to talk about her latest book.

Broken Heart is a contemporary romance and was released on October 1st.
Please tell my readers a little bit about your book. Broken Heart is the fourth book in a series about a family that is a cross between the Hearsts of newspaper fame and the Kennedys.  Each book is a stand-alone, and this one is about Stacey Barlow-Barrett. Stacey is married, but not happily. When her marriage blows up, it’s the lover she dumped who’s there to pick up the pieces. Stacey travels a very rough road to a happily ever after, but it’s also an HEA that includes some big changes on her part.
Describe the genre of this particular title, and is it the only genre you write in? Broken Heart, and its sister stories, are all contemporary romance, which is what I primarily write. I have also written a couple of paranormals involving Selkies, and self-published three vampire novels.
Why have you become a published author? I have to write. I would suspect that’s the response a lot of writers make. I suppose I could have continued to write and never have sought publication, but that would be, as my husband said, like the woodcutter who cuts and stacks his logs in the forest and then simply lets them lie there rather than warming someone’s hearth. I hope my books warm someone’s heart or just provide some relaxation and entertainment.
What is your writing routine like?  I wish I had a routine. Right now, while I’m working on my master’s degree, there is no routine. I write fiction on those rare occasions when I have some free time. At the moment, the majority of my writing is research-based papers.
Are you a member of any writing organizations and, if so, have they helped? I am a member of Romance Writers of America and the Heart of Carolina Romance Writers Chapter. I cannot say enough about how helpful this has been. I have met some wonderful people, made great friends, and received invaluable craft and business information. RWA and its member chapters are wonderfully supportive to all writers.
Will you share some encouraging words for authors still struggling for that first contract?  Don’t. Give. Up. I am firmly convinced that being a successful, published author is the result not only of luck, but persistence. I always think of that saying about lottery games—you can’t win if you don’t play. Well, you can’t be published if you don’t submit your work.
Please Share three fun facts about you that most people don’t know.
1) I have an EMMY from when I worked in television news, but the really unusual thing about it is we have the statue on the mantelpiece…sitting on top of the handmade wooden box holding my father-in-law’s ashes. Before you say, wow, this woman’s really weird…my father-in-law was gravely ill at the time I was supposed to travel to the EMMY awards ceremony. My husband insisted I go because he said that’s what his dad would want, even though I insisted I had a snowball’s chance in you-know-what of winning. I went, I won, and shortly after I returned, my father-in-law passed away. When we set his ashes on the mantel, I jokingly picked up the statue and said, “Pa, this is for you,” and set it down…the base of the statue exactly fit the lip of the box. So there they both stay, together.

2) I’ve ridden in a Swiss Army rescue chopper along with a Great Dane as part of an airlift off a mountain after a train malfunctioned.
3) I once punched a Frenchman in the face while riding a train from Zurich to London.

What’s next for you? Right now it’s concentrating on completing my master’s degree in education.

BOOK BLURB
Stacey Barlow-Barrett has the perfect life–or, at least, the illusion of one. She’s married to the man her parents approved, and she’s making it work. But keeping up appearances is wearing her down. Her husband, Jace, wants to start a family. Her former lover, Mason, is a business associate she can’t cut off, and he twists the knife at every opportunity. Trying to make everyone happy–everyone except herself–has her on the verge of a breakdown.

When Jace’s best friend moves in, everything that seemed tenuously tolerable is now completely unbearable, and Stacey realizes something is very wrong in her marriage. Jace is keeping up appearances too, and it’s at Stacey’s expense.

Mason is the only one she can turn to for help…if he can forgive her for marrying Jace while the sheets were still warm from their last encounter. And even if he does forgive her, and she does dig her way out of the mess her marriage has become, Stacey may not be ready for what he needs in return: love.


Read an Excerpt HERE
Other books available from Laura browning


I live in the rolling country of central North Carolina in the middle of a small farm along with my husband and son. My background with horses and journalism was the initial impetus for this series, of which Broken Heart is the fourth book. In addition to writing, I teach high school English to at-risk students and am currently studying for a master’s degree in education. In my non-existent spare time, I enjoy spending time with my family and my menagerie, now down to one horse, four dogs, a cat, and a lizard (who really isn’t the most exciting pet).
How can my readers buy your book?
Readers can go to the publisher’s HOME PAGE
Find more information about Laura
and her book, Broken Heart, at:
WEBSITE     BLOG    TWITTER
FACEBOOK    GOODREADS
Posted by Nancy Lee Badger at 12:30 AM