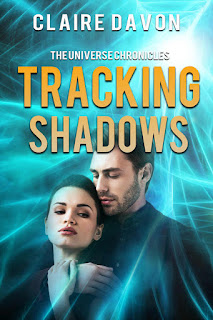 I invited Claire Davon, a fellow author with Soul Mate Publishing, to hit the holiday streets running by sharing her latest novel with all of my readers. Take it away, Claire!

Claire-I am so thrilled to share my second Universe Chronicles book Tracking Shadows. This book continues the adventures of the Universe group, a shadowy governmental agency that specializes in people with powers. In this story, the stoic leader of Richmond’s branch of Universe, Quillan Hardis, goes on the run with shadow manipulator Jiana Falco in order to save her from the two other agencies desperate to get their hands on her and her powers. But they’re not the only ones who want to get their hands on Jiana…

The book was recently released by Soul Mate Publishing. It is unabashedly a paranormal romance. The entire series started as a dream, but took many twists and turns to get to where it is today.

Book Blurb
Jiana Falco has waited and watched a long time for the chance to escape Night Stars. When she finally slips away, she burns the last bridge by saving Quillan Hardis. But now, trapped in his grasp, she’s in even deeper trouble.

Under a secret order to unlock her untapped power—by any means necessary—Quillan takes Jiana on the run, where a spark of desire blooms into something warm and genuine. But her fear of Night Stars could drives Jiana so deep into the shadows nothing can lead her out. Not even the light of Quillan’s love.

Excerpt from Tracking Shadows
Jiana straightened in her seat. The shadows didn’t lie. The head of Night Stars’ opposition group was in danger. If Tanner detected her preoccupation, he didn’t comment on it. As long as she wasn’t moving then she supposed he figured he had nothing to worry about. His talent of enhanced strength was a weak one, but it made him stronger than her in a one-on-one matchup. At least that was what her uncle believed, and had passed along to the other agent.
He was about to learn differently.
Jiana watched a moment longer to make sure that she wasn’t mistaken. Spots danced in her vision and halos surrounded the vehicles. Her head throbbed like she had a headband on too tight. Then both feelings were gone and her sight sharpened. There was no error. The shadows grew thick around Quillan, flowing through the parked cars and onto the street. They almost seemed to have teeth and claws, with the sort of malevolence she did not often associate with shadows. They were used for good or ill, but they were tools rather than entities. These had a life of their own, and their malice made her shiver.
It wasn’t supposed to be this way. Her careful plan fading with every step the man took, Jiana sighed. She had steered Tanner here so skillfully and all for naught. Now she had to leap into action, but for different reasons than she had intended. She could see the shadows rushing toward Quillan to send him into oncoming traffic. She could not see her uncle or her cousin, the other shadow talents in Richmond, but that didn’t mean they weren’t there. This didn’t feel like her uncle, though, this was . . . different.
Evil.
The shadows surged in front of a car going just enough over the speed limit to be a menace, guiding it straight toward Quillan. As before, the man was unaware of the fact. Once he was alerted to the danger he wouldn’t be quick enough to get out of the way. Without shadow talent he would have no way of knowing he was in peril.
But she knew.

More about the Author
Claire can’t remember a time when writing wasn’t part of her life. Growing up, she used to write stories with her friends. As a teenager she started out reading fantasy and science fiction, but her diet quickly changed to romance and happily-ever-after’s. A native of Massachusetts, she left that behind to move to the sun and fun of California, but has always lived on one coast or the other.

While she’s not a movie mogul or actor, she works in the film industry with her office firmly situated in the 90210 district of Hollywood. Prone to break out into song, she is quick on feet and just as quick with snappy dialogue. In addition to writing she does animal rescue, reads, and goes to movies. She loves to hear from fans, so feel free to drop her a line. Connect with her here…


*I use personal Amazon Associate links where available
Posted by Nancy Lee Badger at 1:30 AM