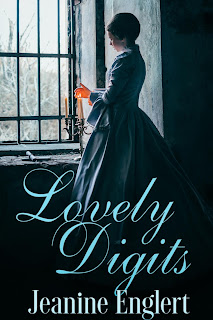 Jeanine Englert is a fellow author with Soul Mate Publishing. She stopped by to share her new book. I love the cover and the plot, so tell us more!

My first novel, Lovely Digits, will be released in just a few short days on June 12th. It is a sweet Victorian romantic suspense set in the small town of Clun, England.

It was a 2018 Golden Heart ® Finalist for best unpublished romantic suspense at this time last year, and it was at the Romance Writers of America conference in Denver last July that I met my now editor, Char Chaffin from Soul Mate Publishing, at a mixer event. She read the first few chapters of my book and offered to publish it, and after so many, many years of seeking publication, it was hard for me to believe it was really happening, but here I am. It is happening. So, if you’re out there writing, never ever give up. A “yes” may be right around the corner.

When two murders strike the sleepy Victorian town of Clun, England, an unlikely partnership forms. But can the killer be found before there is a third?

Lovely Digits is the town oddity…

But quirky spinster Lucy Wycliffe prefers to ignore gossip and embrace her position as the town’s layer out of the dead, despite how her parents’ deaths thrust her into such unlikely work. Lovely Digits, as she’s known to the local townspeople, no longer dreams of marriage, but takes pride in providing dignity to the dead. Desperate to hold on to her family’s cottage and support her widowed sister and young niece, an unexpected offer of employment as assistant to the constable arrives at the perfect time.

But John Brodie is far from a stranger to Clun or the events of its past. Accepting the position as constable in the small town is a double edged sword meant to heal his past and redeem his future, but falling for the beautiful and intelligent Lucy Wycliffe was never part of his plan. As the killer closes in, will John reveal his secret and risk losing everything to save Lucy’s life?

A knocking on the cottage door above stairs startled Lucy, and she poked her finger with the thick sewing needle she held.
“Thistles,” she cursed, pressing her apron to her bleeding thumb. Evidently, repairing the tear at the hem of Becca’s dress would have to wait.
Who would be calling at such an early hour? It was hardly half past nine.
“Enter,” she called up from her root cellar.
She shuddered as the door squeaked open above her. She should oil the blasted hinges on the ancient door, but who had time for such nonsense? Her finger throbbed, but the blood had stopped. Shaking it in the air, she caught sight of the pale female form on her prepping table.
What am I complaining of?
Poor Becca. Lucy swallowed hard. Covering and repairing the girl’s wounds would prove difficult, but she’d try. Becca was her friend. Had been her friend.
“I hear if I need a body prepped, you are the person to see.” A deep rich baritone boomed against the cottage rafters.
The man’s neatly clipped tones screamed city. Londoner, most likely. What would he want here in Shropshire? Nothing of much import ever happened here.
“I suppose,” she offered. “Depends on who’s asking.” Lucy tiptoed over to the base of the root cellar staircase and peeked upstairs. The high shine of the man’s black leather boots caught her eye. Lord above. A person could see their reflection in such a glimmer.
The fine, close cut of dark trousers and a gray waistcoat hugged the man’s rigid frame, his white cravat starched and tied in precise lines as if it dared not be out of place. He was a gentleman. The man had means to be sure, so she supposed she was the person to see after all. She wiped her hands on her stained apron and ascended the stairs to the main floor.
The stranger stepped forward but stilled at her approach. His eyes widened as her face heated. Did the sight of her frighten him? She patted the side of her hair and cringed. Blast. It was as tangled as straw in a bird’s nest. Perhaps a brush would have been in order this morning to tame her unruly locks. She’d try to remember such details in future. 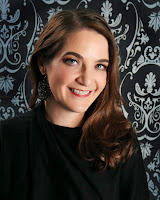 More About the Author
Jeanine Englert is a Golden Heart ® Finalist and Daphne du Maurier Award winner in historical romantic suspense. After years of writing in secret (despite having a master’s degree in writing), she joined Romance Writers of America and Georgia Romance Writers in 2013 and has been an active member ever since. She writes Scottish Highland historicals and historical romantic suspense novels. When she isn’t wrangling with her characters on the page, she can be found trying to convince her husband to watch her latest Masterpiece or BBC show obsession. She loves to talk about books, writing, her beloved pups, and of course mysteries with other readers on Twitter @JeanineWrites, Facebook, or at her website www.jeaninewrites.com.

Her debut novel, Lovely Digits, will be released on June 12th of 2019 by Soul Mate Publishing. It is a Victorian romantic suspense that won the 2017 Daphne du Maurier Award and was named a 2018 Golden Heart ® Finalist for best unpublished romantic suspense. Connect with her here:
WEBSITE     FACEBOOK     TWITTER