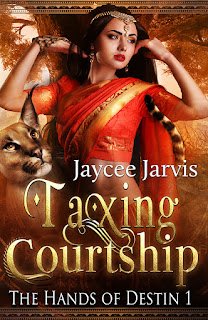 I invited author Jaycee Jarvis to tell us about her latest book. It was released by Soul Mate Publishing (which just happens to be my new publisher!) Take it away, Jaycee!

Taxing Courtship is the first in a new fantasy romance series, the Hands of Destin. It came out on June 20th from Soul Mate Publishing. It is a story of forbidden love in a magical setting. Lady Em steals for her goddess until Quintin steals her heart.
The Book Blurb
Lady by day, lockpick by night, Em has some serious misgivings about her latest sneak job. It stinks of espionage, and she’d be more comfortable with straightforward theft. Her intuition proves right when she is confronted by her client, a sweet and sexy mind-reading tax-collector named Quintin. The job turns sour when they are discovered by his blackmailing boss. Posing as lovers to throw off the scent, their passionate embrace haunts Em even as she returns to her brittle facade as a pampered Lady of the Realm.

This double life is further threatened when her criminal contact is thrown in the stocks, leaving her in danger of exposure, and even worse, with no way to support the temple that has been her responsibility since her mother’s death. In desperation, she seeks Quintin out and is horrified to discover he is a Hand of Destin, marked for service to the Troika by a feline familiar. Hands are loyal and true, defenders of the weak, upholders of the law, notoriously honor-bound. In short, everything that she, a willing outlaw, is not.

Despite their differences, the attraction between Em and Quintin only grows stronger, even as she seeks out new ways to earn the beans she needs for her temple. When Em’s father starts talking marriage settlements with a wealthy, but odious, suitor, Em realizes just how much Quintin means to her. But can she find a way to save her temple and still marry her poor but perfect tax collector?

Excerpt from Taxing Courtship
Han-Auditor Quintin nearly choked on his own panic. They were doomed. “The Bursar’s coming!”
“What?” the lovely thief whispered. “How do you know?”
“We have to hide you,” he told her, though he had no idea where.
She took a step back toward the room with the trunk.
“Not there.” He dug his fingers into her elbow. “That’s his office.”
The sparsely furnished warehouse offered no better options.
Hurry! A thought belonging to another whistled through Quintin’s mind. Boss at door.
The front door rattled ominously.
He froze like a rabbit spooked by an owl. This was a disaster. The Bursar was about to find him skulking around the Tribute Office with a professional thief. He would be dismissed in disgrace, his honor and standing as a Hand called into question. His friends would be shamed to know him and his mother—
The thief pushed him.
He staggered into a pile of goods and sat with a thump on a barrel. His staff clattered to the floor.
Before he could recover his balance, she straddled his lap. “Trust me.”
He opened his mouth to speak.
She sealed it shut with her own. 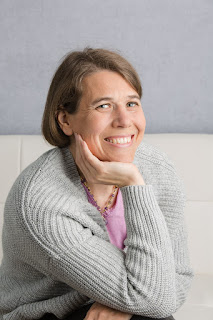 More about the Author
Jaycee Jarvis is a Golden Heart® finalist who writes lush fantasy novels with plenty of heart and magic. When not lost in worlds of her own creation, she resides in the Pacific Northwest with her husband, three children and a menagerie of animals. Connect with her here: