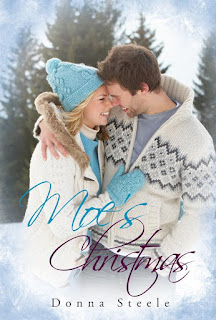 Donna Steele has written another new book, and I asked her to stop by and share the intimate details of her newest story, Moe’s Christmas.

Thanks, Nancy! Moe’s Christmas is my fourth Christmas novella and a fun one as it continues to follow the family from my book, Before You. Since I come from a family with a ton of cousins, this felt personal and familiar.

Our Christmas will be different this year – we will get to see our family, son, both daughters and our precious grandson and spend time with them, but we’re doing it from a one-bedroom apartment with minimal decorations – my Santa collection will have to remain in storage this year – but next year in our new home we’re going to blow out all the stops!

Book Blurb
Moe hasn't taken time to think about his lack of female companionship for a while. When his cousin, Noah, finds the love of his life, it awakens something in him.

Kim is recovering, from being shot at a mall on Black Friday, from a disastrous marriage, from being separated from her sons. And it's Christmas.

When these two people meet, the possibility of life making sense again might make this a great Christmas after all. 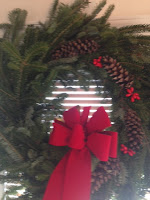 Excerpt from Moe’s Christmas
Kim silently chastised herself for the instant retreat. This man had done nothing to frighten her. He was a large man, even bigger than Jerry, but the vibe she got from him was the complete opposite of her ex.
Jerry had used his size to intimidate and bully since his high school football days. Her first impression of Moe was of a large teddy bear though she did feel a strength underneath that he didn't need to flaunt.
"Kim Harris, this is my cousin, Moses Edwards," Noah said by way of introduction.
"Please call me Moe," Moe said quickly, cutting his eyes at Noah.
"Kim teaches at UNCA with me."
"You know him and still agreed to come?" Moe asked and she relaxed slightly at the banter. These men were good friends as well as cousins.
"Is there something you need to tell me?" she countered.
"Do you have a week?" Moe responded as Noah stepped between them.
"Ignore the hulk in the hall. Let me show you your room."
"Dinner is nearly ready," Jocelyn said. "Noah, take her things up to the yellow room. Come on back to the kitchen when you're ready." Jocelyn turned to the rear of the house while Moses, Moe, took her suitcase from Noah and headed up the stairs. She followed at a slight distance as Noah joined his wife. Hopefully Moe hadn’t noticed her retreat. When would she get over this damn skittishness?
Moe looked nothing like the shooter. That little asshole had been short, small with greasy hair and a "little man" complex, needing the gun to show his worth, if she were allowed to diagnose him. Moe's body reminded her more of Jerry, which was worse.
Kim concentrated on the house. Noah spoke of it often and his love of the place shown through, but she'd never seen it before. The place was larger than she’d imagined and obviously well cherished. The Christmas tree in the living room was magnificent and greenery on the stairwell and over the mantle gave off an aroma she hadn't appreciated this year. Moe led her back downstairs and they gazed at the tree in silence. Was he watching her?
Dinner was ready and Kim watched with surprise as the men pitched in to bring it to the table. Moe even poured the tea. Jerry had never done anything in the kitchen, even after the boys were born.
Dinner was relaxing. Kim had met Jocelyn a couple of times at UNCA functions and of course she had worked with Noah for several years. She watched their subtle interaction over the meal and envied it. Their love for one another shone clear. Had she and Jerry ever had that?
She caught Moe watching her a couple of times. He'd grin unabashedly when she did, and Kim found herself returning his grin finally.
"You have questions, don't you?" she finally asked him.
"No. But I do find myself wanting to offer to cut up your food."
She laughed and realized it was the first laugh she'd had since she could remember. This large man was a nice guy. She had no business comparing him to her ex just because of his size. 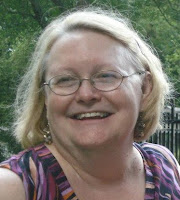 Women strong enough for love.
Donna writes science fiction, paranormal and small town romances about women coming into their strength and having the courage to find and accept love. Now that she has retired from going into an office every day, she created an office at home and writes full time. Talk about living the dream!

She was the girl at the party who was yearning for the quiet corner and a book to read (go Rory Gilmore!), and has been writing in her head since she learned to read. Getting those stories down on paper (or in her laptop) has been more fun than she ever imagined it could be. The possibilities of science fiction have always drawn her and she's read them all, there just needed to be a little more romance in them. She finally got up the courage to write them herself and is delighted to be able to share these stories with you. She is a member of Romance Writers of America, the Fantasy, Futuristic & Paranormal Chapter of RWA and the Heart of Carolina Romance Writers.  Connect with Donna Steele: