Angela Quarles, her RITA, and MUST LOVE KILTS

Author Angela Quarles recently returned from the 2016 Romance Writers of America conference in San Diego with some extra luggage...her first RITA award! The RITA is to authors what the Oscar is to actors. It is the quintessential proof that an author's hard work has true meaning.

Angela stopped by my blog to share a brand new book that follows her award winning book Must Love Chainmail, her second book, which followed Must Love Breeches (I love that title!)

Here is the Book Blast about her new release
Must Love Kilts.

The Jacobite Rebellion--not the best time to get drunk, hook up with a guy, and lose your sister. 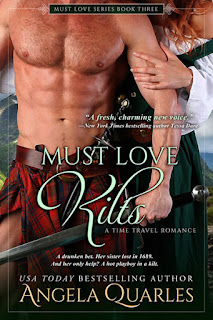 When computer game designer Traci Campbell gets too close and personal with a bottle of Glenfiddich while vacationing in Scotland, she whisks her kilt-obsessed sister back to 1689 to prove hot guys in kilts are a myth. Hello, hundred bucks! But all bets are off when she meets Iain, the charming playboy in a to-die-for kilt.

Iain MacCowan regularly falls in love at the drop of his kilt. The mysterious red-haired lass with the odd accent is no different. But when his new love is discovered to be a Campbell, the most distrusted name in the Highlands, his dalliance endangers his clan's rebellion against King William.

It’s all hijinks in the Highlands until your sister disappears...
Traci thinks men are only good for one thing--thank you, Iain!--but when she awakens once again in Ye Olde Scotland and her sister is gone, she must depend on the last person she wants to spend more time with. He wants to win a heart, she wants to keep hers, but can these two realize they're meant for each other before the Jacobite rebellion pulls them apart?

Excerpt from Must Love Chainmail

That night, Traci lay curled up in the huge, dark-timbered, four-poster bed, hearing every scurrying noise in the rambling stone edifice that Iain’s clan called home. Let’s be real, it was a friggin’ castle. And it was just so damned...quiet. Outside and in. As if the quiet were a heavy weight, so that every whisper of a noise became a giant ripple through that weight, kicking her heart, her nerves.
Who knew that even a curtain moving in some unseen breeze made a noise? Well, it did. A kind of swish-thurr. And there were curtains on all four sides of her bed. A weird mixture of safety and fear infused her, being enclosed like that. As if she were wrapped in her own cocoon made up of just her bed, its covers, and pillows. But, on the other hand, she couldn’t see what was on the other side of those heavy curtains. What if that scrrritching was a seventeenth-century rat coming to gnaw on her shoes? Or to steal up into her bed and gnaw on her bare toes?
She pulled her feet deeper under the covers. Man, if it was a rat, she’d friggin’ lose it. She shivered. She’d hated rats ever since she’d been introduced to her creepy cousin’s pet rat Ivan. Ivan the Terrible, she called it, because her cousin had trained it to sneak up on her whenever she was alone and press its disgusting, whiskery nose on her bare feet. Her cousin apparently lived for her shrieks.
A much louder sound than some would-be rat ricocheted through the room, and she stiffened, her heart pounding. A drawn-out creak followed.
The door. It was the door opening. Iain. It has to be.
She’d gone to bed much earlier—on purpose—to avoid the awkward moment when they had to go to sleep separately. But then she’d lain awake for several hours, trying to absorb all that had happened, her mind unable to shut up.
A soft glow of light bloomed from the direction of the door, muted by the thickness of the bed curtains. A rustle and a thump. A muffled curse. The light bobbed and shifted from the left to the right side but didn’t come closer to the bed.
It was Iain, right?
She eased back her covers, careful not to make a noise. She bit her lip and rolled up onto her side, placing her head near the gap in the curtain to her right. She reached forward and edged the fabric back, just a fraction.
She sucked in a breath but clamped her lips shut.
Oh. It was Iain all right. He stood, three-quarters of him facing her, highlighted by the orange glow of the lingering peat fire, his candle perched on the mantel. That light, mixed with the moon’s feeble glow from the lone window, cast his form in shifting shadows. But, oh boy. It was enough to see.
See as he unclasped his kilt where it draped over a strong shoulder. See as the fabric rustled downward to pool in drapes along his back side. See as he grasped his linen shirt and dragged it up by slow degrees, revealing his powerful torso in the dim light. His muscles bunched and flexed as the fabric swished over his head.
Oh, what a lovely chest. So she had remembered that correctly.
And then... And then his long, strong fingers settled onto the belt holding his sporran and plaid, the light sprinkling of black hairs across his powerful chest narrowing down to a point where his hands had paused. His chin raised, and his eyes lifted to her position, but with her nestled in the dark depths of the bed, he couldn’t possibly see her. All the same, she felt the heat of his stare, and she squirmed.


The light played across the planes of his strong hands and forearms, allowing her to note the miniscule shifting of muscles signaling his next move. His shapely fingers moved with practiced ease, and he unclasped the belt. The kilt dropped.

Angela Quarles is a RWA RITA® Winner and USA Today bestselling author of time travel and steampunk romance. Her steampunk, Steam Me Up, Rawley, was named Best Self-Published Romance of 2015 by Library Journal and Must Love Chainmail won the 2016 RITA® Award in the paranormal category, the first indie to win in that category. Angela loves history, folklore, and family history. She decided to take this love of history and her active imagination and write stories of romance and adventure for others to enjoy. When not writing, she's either working at the local indie bookstore or enjoying the usual stuff like gardening, reading, hanging out, eating, drinking, chasing squirrels out of the walls, and creating the occasional knitted scarf.
Connect with Angela here:

Join her mailing list HERE
Paranormal Unbound, the group blog I belong to is HERE
Posted by Nancy Lee Badger at 1:30 AM