SPARK, a Book Where Dragons and Horses Mix

Horses have been an irrational hobby of mine since childhood. I have a black & white photo somewhere of me riding a pony when I was 4 or 5. I had the biggest smile on my face. I think I was riding around the ring, somewhere in New Hampshire, and I was in heaven. Over the years, I have ridden horses in and around my Long Island, NY neighborhood, thanks to a neighbor who allowed the local kids to muck out the stall and lead the horses through the woods. I twice attended horse camp in Connecticut, and even went on a trail ride with my new husband while honeymooning on Prince Edward’s Island in Canada. I have collected ©Breyer Horse Models ever since I started earning an allowance, and now I include horses as characters in my brand new series, Clan of Dragons.

My latest release is Spark, the first book of the series. Spark is a Scottish paranormal romance full of dragons, shifters, pirates, wolves, and Scottish villagers on the island of Skye. The timeframe is somewhere in the early fifteenth century, and revolves around three dragons who happen to be brothers. They have a big problem…the lack of female dragons. One brother likes to shift into a white wolf to run through the forests, and another turns into a huge antlered red stag. The youngest has not tried to shift into anything. Seems he has plenty of fun flying over Skye’s Black Cuillin Hills as a purple dragon. However, to get close to a human female, to see if they might be compatible, he shifts into a horse and winds his way into her life. Sometimes a writer has to follow the advice that says “Write what you know,” but writing paranormal romance means I can take that much farther.

Smoke, the second book in my Clan of Dragons is already available for pre-order and will be released October 7th. I go a little out of my comfort zone by making the middle dragon one who enjoys shifting into a white wolf. The third book in the series, Smolder, follows their heartbroken older brother, a red stag-shifting dragon, who lost his mate and unborn babe to a hunter's arrow. 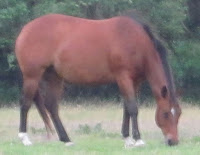 Posted by Nancy Lee Badger at 8:07 AM