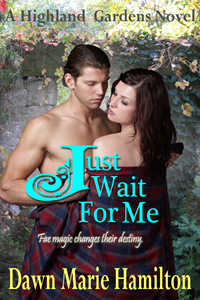 I invited fellow author Dawn Marie Hamilton to stop by and share with my readers her latest book, Just Wait For Me, which she released on August 10, 2016.
The Book Blurb:
The third match in the Fae Queen's challenge is in play. Will fae magic change Stephen and Jillian's destiny?In the chaotic aftermath of the battle of Flodden, an injured Highland warrior makes a vow to a twenty-first century lass cast back in time by a meddling, matchmaking faerie. Stephen MacEwen promises to find a way to send her forward to her own time. But is that an oath he'll want to keep after finding love in Jillian O'Donnell's arms? And after saving Stephen's life, will Jillian want to go?No matter what the lover's decide, Stephen's wife--a woman who acquired the title through deceit--and an old enemy attempt to destroy the couple's chance for happiness. Only with the help of Fae allies can Stephen and Jillian overcome and earn their reward--everlasting love.
The Cave of the mysterious Gray Women was introduced in the first book of the Highland Gardens series and developed upon, with inspiration from Smoo Cave near the village of Durness in Scotland, in 'Just Wait For Me'. Here is an except at the Caves from Stephen's point-of-view shortly after Jillian traveled back in time to 1513 and wasn't yet aware of her exact whereabouts... 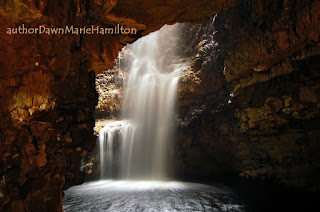 Of a sudden, Jillian jerked her feet up onto the shelf where she sat. Wrapping arms tightly around her legs, she stared into the water with a frown.
“What is wrong?” Stephen asked, sliding closer.
“Something brushed over my feet. Are their snakes in the water?”
Her horrified expression made him chuckle. “Nae. Just wee toothless fish.”
“Oh. Like the garra rufa that nibble away dead skin from your feet when you get a fish pedicure at one of the fancy spas in Asheville.”
“I dinnae ken about that, but the fish in this pool will not hurt you.”
She dropped her feet deeper into the water and smiled. “Tickles.”
“Aye. Does.” He sounded like the village idiot.
“I’m lost. The children told me the Gray Women would help me find my way to a phone or to a town where I could call my brother, but they keep disappearing. Do you know where I can go to make a call?”
“The women come and go. Mysteriously.”
“Why are you here?”
“To heal.”
“What happened?”
“Ach. ’Tis a long story.”
“You’re Scottish. Right? You sound a lot like my business partner’s husband, Patrick MacLachlan. He’s originally from Scotland.” She shook her head, making her braid bob. “Of course, you wouldn’t know him. Sorry. I tend to ramble when I’m nervous.”
“I dinnae wish to make you uncomfortable.” She kenned Patrick!
She smiled, and Stephen had to rub an achy spot near his heart. He didn’t ken whether it was because she affected him so or because she kenned Patrick. He missed his cousin terribly.
“So? About a phone?” she persisted.
“Phone? Is that something of your future time?”
Her eyes narrowed, brow furrowed. The look clearly stated she believed him simple in the head. He might strive to be underestimated by an opponent in battle, but he didn’t like the lass thinking poorly of him.

More about Dawn Marie Hamilton
Dawn Marie Hamilton dares you to dream. She is a 2013 RWA® Golden Heart® Finalist who pens Scottish-inspired fantasy and paranormal romance. Some of her tales are rife with mischief-making faeries, brownies, and other fae creatures. More tormented souls—shape shifters, vampires, and maybe a zombie or two—stalk across the pages of other stories. When not writing, she’s cooking, gardening, or paddling the local creeks with her husband. Connect with her:
Blog     Twitter     Facebook    Goodreads
Amazon     Google+     Pinterest