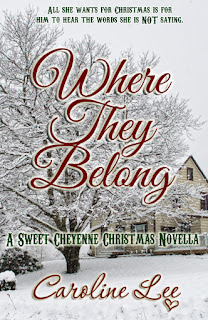 Caroline Lee stopped by to share intimate details of her life, and to talk about her book. Where They Belong is a sweet historical romance and was released before Christmas, 2015. Please tell my readers a little bit about your book.

Caroline- The Sweet Cheyenne Quartet is my Western holiday series. It follows the Barker/Murray family and their friends, as each finds love in unexpected places. In A Cheyenne Thanksgiving, for instance, family friend and neighbor Cam McLeod rescues a beautiful Chinese woman wandering across the Wyoming plains—talk about unexpected! But this book (it’s really a long novella) is a particularly special holiday story; it’s the story of the youngest Murray sister, Annie, who is deaf. Since the very first book, I had readers asking me when Annie was going to get her story, but I hesitated, because I was concerned about how to build a relationship (in 1890) when one character couldn’t hear. It took me a while to write, but I think I did her (and the relationship) justice. Both Annie and Reggie (who was introduced as the wastrel younger brother in A Cheyenne Celebration) are struggling to choose between two worlds and two futures. It’s a Christmas story about finding one’s place, and about figuring out Where They Belong. Reviewers tell me that they’ve laughed and cried multiple times while reading it, which is a grand compliment to an author.

Want to know a secret? I wrote the story, and I still cry every single time I read the big “grovel” in the final scene. Reggie is such a sweetheart, and I love how he really “gets” her.

Nancy- Readers do not understand that authors love their characters, and how much their stories affect even them. Describe the genre of this particular title, and is it the only genre you write in?

Caroline- I have a Master’s Degree in social history, with a focus on the history of marriage. When my colleagues asked me if I was going on to get my doctorate, I laughed and showed them my first book. I love putting my degree to use this way! I only write historical romance, but I’m not limited to sweet western holiday stories. I’ve got a wonderful book out (Brothers of Baird’s Cove: Renegade) set on an island off the coast of Charleston, SC during Reconstruction, and I’ve been working on the other two books in that series.

Nancy- I love the Charleston area. I am originally from New York, raised a family and started writing in New Hampshire, and have now fallen in love with my new home in the southern United States. When did you start writing toward publication?

Caroline- In 2013 I answered a prompt from Avon for Christmas romances. My story didn’t get into that anthology, but I thought that it was pretty good, so I decided to share it online. Amazon was obviously the best choice for distribution, and I had to choose a nominal fee to publish. I didn’t even realize that what I was doing was called “Independent Publishing”, but I loved it. The next year I did it again, and The Sweet Cheyenne Quartet was born.

I’m a huge proponent of self—or independent—publishing (and I’m happy to chat with anyone about it!). There’s nothing a publisher can do for me that I can’t do myself (or hire someone to do, rather). That’s really liberating… but it can be lonely too. A publisher offers a support network and a marketing team that, while I can hire, I can’t really match. So there are real benefits to both routes to publication, but I’m still firmly in the independent camp. I love the control!

Caroline- Write. Write write write. Write because you love it, because you have a story in you that needs to be told. After that one has been told, tell another and another. Then join a writing organization (I’m a member of my local Romance Writers of America chapter) that will help you become a better writer, through workshops and seminar and critiquing. Even joining a local group that meets at the nearest Starbucks is helpful; the support and accountability will do wonders for your word count and your skills. Then write some more. And remember that a contract with a publisher isn’t the only path to publication. We think of it as validation, to receive that contract… but your first monthly paycheck from Amazon’s Kindle Direct Publication will be just as validating, I promise.

Please Share three fun facts about you that most people don’t know.
1) I cry/laugh/sigh romantically over my own work. Even my old stories.
2) My youngest son inherited my collection of stuffed hedgehogs, which all have “H” names.
3) I work for George Mason University’s LIFE Program, a post-secondary program for students with intellectual and developmental disabilities.

Caroline- I have three different series I’m working on write now (get it?). Two new (secret) ones and the Brothers of Baird’s Cove Trilogy. You’ll see some of those later this year! And of course, there’s going to be a Sweet Cheyenne Christmas story in 2016, and probably an Easter one in 2017.

BOOK BLURB
Where They Belong: A Sweet Cheyenne Christmas Novella
Small-town girl Annie Murray is excited about the adventure of a grand coming-out season in New York City over the holidays, but it doesn’t take long to realize that the offer isn’t all it’s cracked up to be. Annie is deaf, and has spent years changing herself—how she communicates—to fit in with “proper” society. She’s even learned to speak, for goodness’ sake! But the only thing these people seem to care about is how different she sounds, and it’s darned galling to know that she is still not acceptable. In fact, the only person in New York who tries to make her feel comfortable at all is Dr. Reginald Carderock.

Reggie knows what it’s like to feel like you don’t belong someplace. He was born and raised among the Fifth Avenue elite, but is only barely tolerated these days. His friends and family don’t understand how he can spend all of his time treating the city’s poor at his clinic, or what he could possibly see in his brother’s little deaf student. But the more time he spends in Annie’s company, the more intrigued he is by her strength, determination, and compassion.

Just when the two of them figure they’ve reached an understanding, they get the worst possible news from Annie’s family in Cheyenne. Now they’re stuck together in a mad dash across the country, dreading what they’ll find at the end. It’s a crummy way to spend Christmas Eve, and Reggie knows that he might lose her forever when they reach their destination. He’ll need to figure out a way to show her that he can see her for who she truly is.

Which is good, because all she wants for Christmas is for him to hear the words she’s not saying. 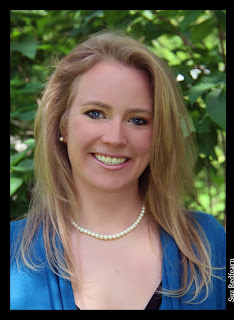 Caroline Lee is what George R.R. Martin once described as a "gardener author"; she delights in creating interesting and lovable characters, and allowing them to lead their own stories. Often they draw the story along to completely unexpected--and wonderful!--places. She considers a story a success if she can re-read it and sigh dreamily... and she wishes the same for you.

A love of historical romance prompted Caroline to pursue her degrees in social history; her Master's Degree is in Comparative World History, which is the study of themes across history (for instance, 'domestication of animals throughout the world,' or 'childhood through history'). Her theme? You guessed it: Marriage throughout world history. Her favorite focus was periods of history that brought two disparate peoples together to marry, like marriage in the Levant during the Kingdom of Jerusalem, or marriage between convicts in colonial New South Wales. She hopes that she's able to bring this love of history-- and this history of love-- to her novels.

Each one of the books in her Sweet Cheyenne Quartet has reached the Best-Sellers list on Amazon, and all are available in e-book and paperback formats. Caroline is living her own little Happily Ever After with her husband and sons in North Carolina.
Posted by Nancy Lee Badger at 1:30 AM

Email ThisBlogThis!Share to TwitterShare to FacebookShare to Pinterest
Labels: an author's journey, author interview, Caroline Lee, on writing sweet romance, Where They belong