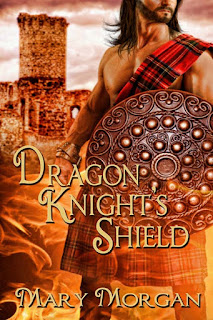 Mary Morgan stopped by to share some intimate details about her life and her latest novel. Her  book, Dragon Knight’s Shield, is a Scottish Paranormal Time-travel Romance and was released on January 8, 2016. Please tell my readers a little bit about your book.

Mary- This is the fourth book in the Order of the Dragon Knights Series. Angus MacKay is the oldest of the Dragon Knights. He is the last brother to walk the path of redemption after the death of their sister. As the oldest, his journey was the most haunted and it will take a warrior woman to stand beside him. Deirdre Flanagan will turn his world upside down.

Mary- This is a Scottish Paranormal Time-travel romance and the only genre I’m currently writing. I do have plans for a spin-off, which will add a fantasy element to the stories.

Mary- Yes to both questions. I was finishing the third in the series when I got the contract for the first story.

Mary- Yes! When I received my first rejection letter, I jumped for joy saying, “I’m acknowledged!” Of course afterwards, I got upset, but continued to submit to many more. With each rejection letter I received, the right fit for a publisher was heading my way. I never gave up.

Mary- I’m an early bird, rising before dawn. Breakfast and exercise comes first, and then I spend several hours answering emails, promoting, and social media. The rest of the day is spent writing, and I usually wrap up around 5:30pm, unless I’m doing edits. When I’m ankle deep in edits, my days will last much longer.
Nancy- Will you share some encouraging words for authors still struggling for that first contract?

Mary- Never, ever give up! With each rejection, believe that the right one for you is heading your way. Make this your daily mantra: “I will become a published author!”

Please Share three facts about you that most people don’t know. (short answers are best!)
1) I collect stuffed sheep.
2) I wanted to be the first woman astronaut in space.
3) I was the Children’s storyteller for Borders Books.

Mary- I’m finishing the final book in my series, which I hope to have out in mid-summer. You’ll find out who the fifth Dragon Knight is in Dragon Knight’s Shield. It’s a surprise.

BOOK BLURB   Angus MacKay, leader of the Dragon Knights, failed his brothers and his clan upon the death of his sister. Now he must fight the darkness of despair tempting his soul. Back on Scottish soil, he comes face to face with Deirdre who can wield a sword as mightily as his warriors, and takes her captive. Yet, with each passing day, the fire dragon inside him roars to claim the one woman fate has destined for him.

Famed mystery writer, Deirdre Flanagan, is unprepared for the next chapter in her life. On a vacation to Scotland, she steps through the mists and enters into a skirmish alongside a Highlander. However, the fight has only begun, and now she must battle Angus as well as evil in order to claim the love of this Dragon Knight.

Will their love be powerful enough to shield them from danger, or burn them to ashes?

Excerpt
His look was predatory, lustful, inviting, and she took a step backward. Words failed her as she took another step back.
He arched a brow and his smile became seductive. “Do I frighten ye?”
“No!” she lied. Like hell you do! You’re as gorgeous as sin standing there, and I want to rip your clothes from your body.
Pushing off from the wall, he stepped into the room and silently closed the door behind him, his eyes never leaving hers. His hair hung in soft waves past his shoulders, and her fingers itched to twine within them. Her body ached in places so deep—longing for even the slightest touch.
“Are ye unwell, my lady?”
The burr of his voice so low—so sexy, she could only stare at him until his words resonated in her mind. “No,” she replied softly, feeling the flames of desire heat not only her face, but also her entire body.
This time when he took another step closer, Deirdre didn’t back away. Now he stood so close she could feel the warmth of his breath across her face—a mix of wine and pure male.
She watched mesmerized as he reached for a lock of her hair, twining it around his finger. “So verra soft.”
Deirdre couldn’t breathe, as he let the curl unravel and cupped her face in his hands. “Ye confuse me. Ye torment me in my dreams,” he whispered against her cheek, sending a wave of pleasure down her spine.
Without thought, she groaned and leaned into him—his beard grazing her cheek. She no longer battled her mind for the man. “Kiss me, Angus.”

MORE ABOUT THE AUTHOR
Scottish paranormal romance author, Mary Morgan resides in Northern California, with her own knight in shining armor. However, during her travels to Scotland, England, and Ireland, she left a part of her soul in one of these countries and vows to return.

Mary's passion for books started at an early age along with an overactive imagination. She spent far too much time daydreaming and was told quite often to remove her head from the clouds. It wasn't until the closure of Borders Books where Mary worked that she found her true calling--writing romance. Now, the worlds she created in her mind are coming to life within her stories. You can find more information about Mary Morgan here: