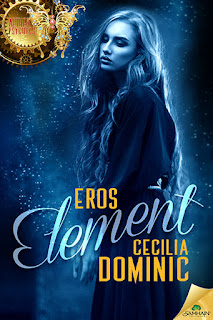 Cecilia Dominic dropped by to talk about her life, and her latest book. Eros Element is a steampunk and will be released on August 25.

Cecilia- Thank you so much for having me, Nancy! I’m excited to be back on your blog. Since I’ve been here before, I’ll answer different questions. For those who want to know more about when I started writing toward publication and broke in, my first interview with Nancy is HERE

Nancy- Please tell my readers a little bit about your book.

Cecilia- Eros Element is the story of a young woman, Iris McTavish, who wants to be an archaeologist and who gets her chance in an unexpected way. Her famous archaeologist father has died in France, but very few people outside her household know. She is biding her time telling people because she’ll likely have to marry once the news gets out, and she’s not interested in marriage, especially not to the odious nobleman who’s pursuing her. When her father is invited to go along as an archaeologist on a mysterious mission, she takes his place. She doesn’t anticipate her secret being found out or that she’ll fall for quirky professor Edward Bailey on their travels.

My high-concept line is that it’s The DaVinci Code meets Big Bang Theory. As I mentioned, Edward is quirky because he lives his life according to the scientific principles of order and predictability in order to minimize anxiety after having had his heart broken. Going on a quest to find the mysterious Eros Element is not part of that formula, but he has to in order to save his research funding. Iris doesn’t fit, either, and it was fun to write how they come together.

Cecilia- Eros Element is steampunk, which is a subgenre of science fiction and is traditionally set in Victorian times and carries steam and often clockwork technology beyond where it faded in favor of gas and electricity. The genre also tackles social issues, but not in an in-your-face kind of way.

I also write urban fantasy and new adult contemporary. My Lycanthropy Files series, which combines medical thriller and urban fantasy, is now fully out electronically, and the third will be coming out in paper in November. In the series, I explore what would happen if lycanthropy – werewolfism, for those who are not familiar with the term – was a genetic disorder, but the cure isn’t fully medical.

My new adult contemporary novel A Perfect Man – as you can tell from the title, it’s definitely fiction – was released in May. It’s about students in a writing program who learn that real life is, indeed, stranger than fiction, especially when it comes to romance.

Cecilia- Oh, wow, I have so many. I’m not agented and would like to be, so I continue to send out manuscripts. Alas, there’s no magic that happens when you sell that means every one of your books will then magically be appealing to all industry professionals. Darnit.

I have a spreadsheet that I’ve kept of book submissions to agents and publishers since I seriously started querying in 2008. I just looked, and my last entry was on line 142. I’m actually a submission slacker because I’ll send out a bunch of queries, get rejections, and then pout for 6-12 months. Sometimes I’ll put reasons for rejections in the spreadsheet, and I found an entry from one of my first rejections that is a good reminder for why you ALWAYS check the agency website no matter what Writer’s Market says. The reason for that early rejection – agent dead. Whoops.

Cecilia- I wish I could say I rise at 5:00 every morning alert and ready to sit at the keyboard and pound out a couple thousand of words before breakfast. What typically happens is more like:

6:45 alarm goes off, snoozed
6:54 alarm goes off, snoozed
7:00 sunrise alarm goes off, I have to get out of bed to stop the effing thing from beeping
7:01 look at sleeping husband, ponder going back to bed
7:02 stumble into kitchen for coffee
7:03 let cats out of their respective sleeping rooms, feed mine
7:04 look for coffee
7:05 damnit, where did I put the coffee?
7:10 finally find coffee
7:11-7:30ish do morning pages (free-writing) to wake up brain
7:30ish pull out laptop, open Scrivener
7:35 put brain-damaged gray cat on couch
7:40 pet cat because she’s pawing at me
7:45 throw ball for other cat to fetch
7:50 put brain-damaged cat back on couch after she jumped off, then forgot what she jumped off to do, throw ball again for other cat
7:50-8:15 repeat cat petting and ball throwing while trying to drink coffee and write

As you can see, there’s not much of a routine. I also write in the evenings sometimes and on weekends, whenever I can. It’s hard to write at the office because there’s always something else demanding my attention, so I like coffee shops if I’m not writing at home.

Cecilia- Remember how I told you I was going to figure out marketing in July? Ummm, not so much. While I do have some support from Samhain, as with most authors, it’s pretty much up to me. I have a Facebook author page, and I enjoy Twitter, mostly for the interaction. I’m currently working on figuring out what parts of promotion I enjoy. I’ve found that I like making graphics like I’ve been for my Lycanthropy Files sales. For example, here’s the one I’m using this week while my third book is on sale for 99 cents:

I’ve always loved to draw and paint, so I suspect making the graphics allows me to use that neglected visually creative side.

What I really love is to speak to writing groups. I apply my psychological expertise on things like procrastination and sleep to writing and the writing life, and so far I’ve gotten positive feedback. I’ll be in Birmingham speaking on procrastination tomorrow (August 22) to the Southern Magic chapter of RWA.

Cecilia- I’m not supposed to say the money, am I?
Just kidding – I like getting some financial reward for doing something I love, and it helps me support my writing habit and do fun things like go to conferences. I’m still only about breaking even, but that’s okay. The best part is interacting with readers who really love my books and series, and they come up with great ideas about my worlds and characters that I haven’t thought of. It’s so fun that these imaginary people in my head are as real to other people as they are to me.

Cecilia- First, make sure the agent you’re pitching hasn’t passed away.
Second, don’t wait six to twelve months between batches of queries.
Third, whatever happens, always grow in your craft. Can’t get that first book accepted? Write another one. Each book is a learning experience.
Fourth, embrace feedback, even the negative kind, but try to surround yourself with people who are constructive, not destructive.

Nancy- Please Share three fun facts about you that most people don’t know.
1) I’m an introvert. People see my day job (psychologist) and the fact I love talking to people and assume I’m an extravert. Nope.
2) My red hair comes from my Belgian side. No Irish blood here (but I’d be okay with it if there was).
3) I can sleep anytime anywhere.

Cecilia- I am still working on the Aether Psychics series. The second one, Light Fantastique, will be out on December 15th. I’m currently working on a series prequel I can self-publish, and then I’m going to jump into the third book, title pending… Okay, I haven’t a freaking clue what it’s going to be called. I’ve had so much fun researching these books! I love history. Currently I’m listening to a Great Course on the Civil War, and I just checked out a book on Freud from the library. Both will be really important for the third Aether Psychics book.

BOOK BLURB
If love is the ivy, secrets are the poison.

After enduring heartbreak at the hands of a dishonest woman, Edward Bailey lives according to scientific principles of structure and predictability. Just the thought of stepping outside his strict routine raises his anxiety.

Adding to his discomfort is Iris McTavish, who appears at his school’s faculty meeting in place of her world-famous archeologist father. Worse, the two of them are to pose as Grand Tourists while they search for an element that will help harness the power of aether.

Iris jumps at the opportunity to prove her worth as a scholar—and avoid an unwanted marriage proposal—while hiding the truth of her father’s whereabouts. If her secret gets out, the house of McTavish will fall into ruin.

Quite unexpectedly, Edward and Iris discover a growing attraction as their journey takes them to Paris and Rome, where betrayal, blackmail and outright theft threaten to destroy what could be a revolutionary discovery—and break their hearts.

Warning: Allergen alert! This book was produced in a facility that handles copious amounts of wine, tea and baked goods. May contain one or more of the following: a spirited heroine, a quirky hero, clever banter, interesting facts both made-up and historical, and lots of secrets. It is, however, gluten free.

Excerpt- For a brief excerpt, check out THIS LINK

Nancy- How can my readers buy your book?
It is already available for preorder from all online retailers in paper and electronic formats.
Readers can go to the publisher’s HOME PAGE

MORE ABOUT THE AUTHOR
Cecilia Dominic wrote her first story when she was two years old and has always had a much more interesting life inside her head than outside of it. She became a clinical psychologist because she's fascinated by people and their stories, but she couldn't stop writing fiction. The first draft of her dissertation, while not fiction, was still criticized by her major professor for being written in too entertaining a style. She made it through graduate school and got her PhD, started her own practice, and by day, she helps people cure their insomnia without using medication. By night, she blogs about wine and writes fiction she hopes will keep her readers turning the pages all night. Yes, she recognizes the conflict of interest between her two careers, so she writes and blogs under a pen name.  She lives in Atlanta, Georgia with one husband and two cats, which, she's been told, is a good number of each. She also enjoys putting her psychological expertise to good use helping other authors through her Characters on the Couch blog post series.


I’d also like to invite your readers to join me for a Facebook party on release day, which will feature guest authors and prizes. The link for that is: HERE