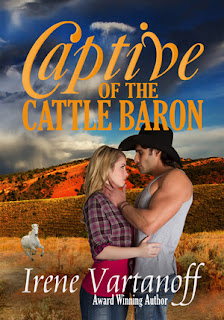 Author Irene Vartanoff stopped by to share a few intimate details of her life and her latest book.

Captive of the Cattle Baron is a sweet ranch romance and was released on June 16, 2015.Please tell my readers a little bit about your book.

Irene- Captive of the Cattle Baron is an update on the old school romances we used to read years ago, in which the hero is rich and domineering and takes the law into his hands. Rancher Baron Selkirk abducts Addie Jelleff—convinced he's saving her from a sordid drug situation. Addie objects, but he won't listen. As they get to know each other on his isolated ranch, we soon see behind his bossy facade to his personal frustrations. He acts in a high-handed manner with Addie but he has his reasons. The major twist is that Addie is a modern woman who isn't intimidated by Baron's attempts to control her. She gives as good as she gets, and she won't let their growing attraction rule her. She's a genuinely strong heroine, which of course only adds to Baron's frustrations—and her own, as their feelings grow.
Nancy- Describe the genre of this particular title.

Irene- This is a sweet romance, which most people define as being about attraction and character rather than being hot and heavy about sex. My characters do have a very strong sexual attraction, but they are surprised and confused by it and they tend to pull back from intense moments. Addie thinks a lot about how she responds to Baron. In direct contrast, Baron acts on his impulses without examining his feelings, and that leads to trouble between them. Sweet romances usually either do not include the hero and heroine making love, or don't show any details. I like leaving some things to the reader's imagination.

Nancy- Is this the only genre you write in?

Irene- I also write superhero adventure (Temporary Superheroine came out in March, 2015 and the sequel will be published this fall) and women's fiction, and I'm working on novels in several other women-oriented subgenres as well. I'm all over the map for now.

Irene- I started trying to sell stories to the comic books as a teenager, and I sold my first stories to DC Comics when I was just out of college. Writing novels was the next step, but it was a rocky road of trying to find my voice in a sea of romances that often featured overly macho heroes I did not like. After writing a bunch of romance graphic novellas for the online comics publisher MyRomanceStory.com, I tried writing novels again. I found the wonderful online support of NaNoWriMo.org, the National Novel Writing Month nonprofit that helps people write 50,000 words in November through the "We're all in this together!" system. I wrote my second novel during the Kiwi Writers (of New Zealand) Southern Cross Challenge, a June version of writing 50,000 words in a month—and for that challenge, I wrote 105,000 words! By the time November rolled around again, I was very confident that I could write novels after all.

Irene- One major reason to become a published author is to raise my hand and say "This is me. I was here. I lived." If we don't strive to make something unique of our lives, we are the poorer. If we have talent, we have a responsibility to explore it and use it. When I was finding it so difficult to complete novels, I tried to deny my writing talent. It didn't work. The urge to tell stories was always there. I simply had to grow into the confidence to tell my stories the way I believe they should be told. All of my novels explore serious themes, but I prefer a light touch about some dark topics. That's why Captive of the Cattle Baron, despite being an abduction story, has a lot of humor in it, too.

Another, more practical reason to publish, or in my case self-publish, is to push myself to bring each story up to an acceptable level of professionalism, and then to let it go to find its audience. Between the first draft of my first novel and the final draft, I must have done fifteen to twenty revision passes, maybe more. At some point I had to decide—or let others decide—that I had achieved a viable story. I've been very gratified by the positive responses from readers so far. People like my strong heroines. I find that totally cool.

Irene- Captive of the Cattle Baron has won several writing contests, although some judges haven't liked the abduction scenario. The editor from a major publishing house who judged one contest finalists' entries actually went off on me in a very unprofessional manner. Naturally, I was expecting that since I'd ranked as a finalist in the contest, this editor would write something nice about the pages she'd read. Instead, she hated my story so much that she mocked a particular scene. In her opinion my secondary characters were corny, silly, and unbelievable. And more. She actually was nasty about it. Her harshly negative opinion set me back for a bit, but on balance I decided I was okay with it. I'd written a story that had induced a passionate reaction, and other readers liked that scene very much, and she'd obviously been having a very bad day. I doubt I'll ever submit a story directly to her, but no big deal. We have to shake off rejections.

Irene- Respect yourself. You are the person with the talent, with the stories, with the human capital that publishers need. They can't write your stories; only you can. Don't give away your work, don't give it away for peanuts, and don't ever sign any contract you don't understand. Write the stories you believe in, even if they don't seem to be the stories other people tell you are commercial. Life is too short to waste time stifling yourself.

Please Share three fun facts about you that most people don’t know
1) I have two chainsaws and I know how to use them.
2) I used to work with Stan Lee. (Yeah, that guy.)
3) I adore opera.

Irene- My immediate goal is to get all my backlog of manuscripts published. Interspersed will be sequels that carry characters to their logical happy end points or tell the stories of interesting secondary characters. I have lots of ideas for stories, some of them "answer songs," if you've ever heard that expression. What I mean is that I've read too many romances that made me angry because the hero got away with bullying the heroine, and I want to write stories in which the woman takes back her power. Captive of the Cattle Baron is one of them, and there will be more.

BOOK BLURB
Abducted by rancher Baron Selkirk—okay, it was an accident, but now he won't let her go—former TV child star turned horse whisperer Addie Jelleff wants to return to Jackson Hole, Wyoming, to defend her actor pal in court. Baron and his vast, isolated ranch appeal to Addie as a respite from the media circus, but he's awfully domineering and she can't possibly give in to their growing attraction while she's virtually his prisoner, can she?

Baron wants Addie to open up about her mysterious past and her commitment to another man. Why won't she give in to Baron, when every time they touch, they catch fire? It's a battle of wills—with neither one backing down.

Excerpt
“I told you to stay away from my stable today,” he said in a gravelly tone from behind her.
She smelled horses on him, and smoke. Leather. Manly smells.  “I’m not at the stable,” she said, still watching the stallion.
He ignored the technicality. “I specifically ordered you not to come back here today.”
She finally glanced at him. “You ordered? You’re acting like a prison warden.”
“You’re a guest, but you were sick. Or so you claim,” he said, eyeing her with open suspicion.
She curbed her impatience. “Haven’t you ever taken even one pill that made you loopy against your will?”
“No. Never.” His glare was uncompromising. “I don’t do drugs and I don’t allow them on this ranch.”
“I don’t do drugs either,” she said. She glared back at him.
“Why are you here at the corral?” Baron demanded.
“I’m training your stallion, getting him used to humans.”
He frowned. “You went inside the fence?”
“I wouldn’t do that without permission.”
“Why should I give you permission?”
She blew out an exasperated breath. “Because I’m a horse trainer.”
“Pull the other one.” He looked her over, missing none of her female assets, making her want to squirm from his slow, appreciative inventory. “You’re far too beautiful.”
“You’re kidding.”
“What are you? A dancer at the casino? A swim instructor at the hotel?”
“Why would you think that?” She cocked her head at him.
“You have an air about you. Poise,” he said, his hands resting on his belt as he looked her over.
“That’s an astute observation,” she replied, impressed in spite of herself. Although she wasn’t about to tell him about her show biz past, somehow he’d made a connection. “Why is my appearance relevant to my ability to train a horse?”
“The only horse trainers I’ve ever met were wizened old things. You don’t look like a horse trainer to me,” he said.
“I can’t possibly be a horse trainer because I don’t look the part?” She started laughing.
“What’s so funny?”
“I don’t look the part.” She couldn’t stop the gales of laughter.
“You’ve been out in the hot sun far too long. Miss Betty told you to rest. I’m taking you back to the house.” He took hold of her upper arm and began to march her toward the ranch house.
“Stop,” she said, sobering up. She pulled against his strong grip. He immediately released her, but now they were face to face, almost touching. Their breaths mingled and then slowed. She stared into his chestnut eyes, seeking something, she didn’t know what. His gaze was equally intent. He answered her without words, and then he looked at her lips. She stopped breathing. He leaned in a few more inches and pressed his mouth against hers.
Buy Links….
Amazon ebook
Amazon PRINT

MORE ABOUT THE AUTHOR Bio 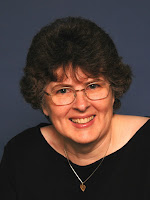