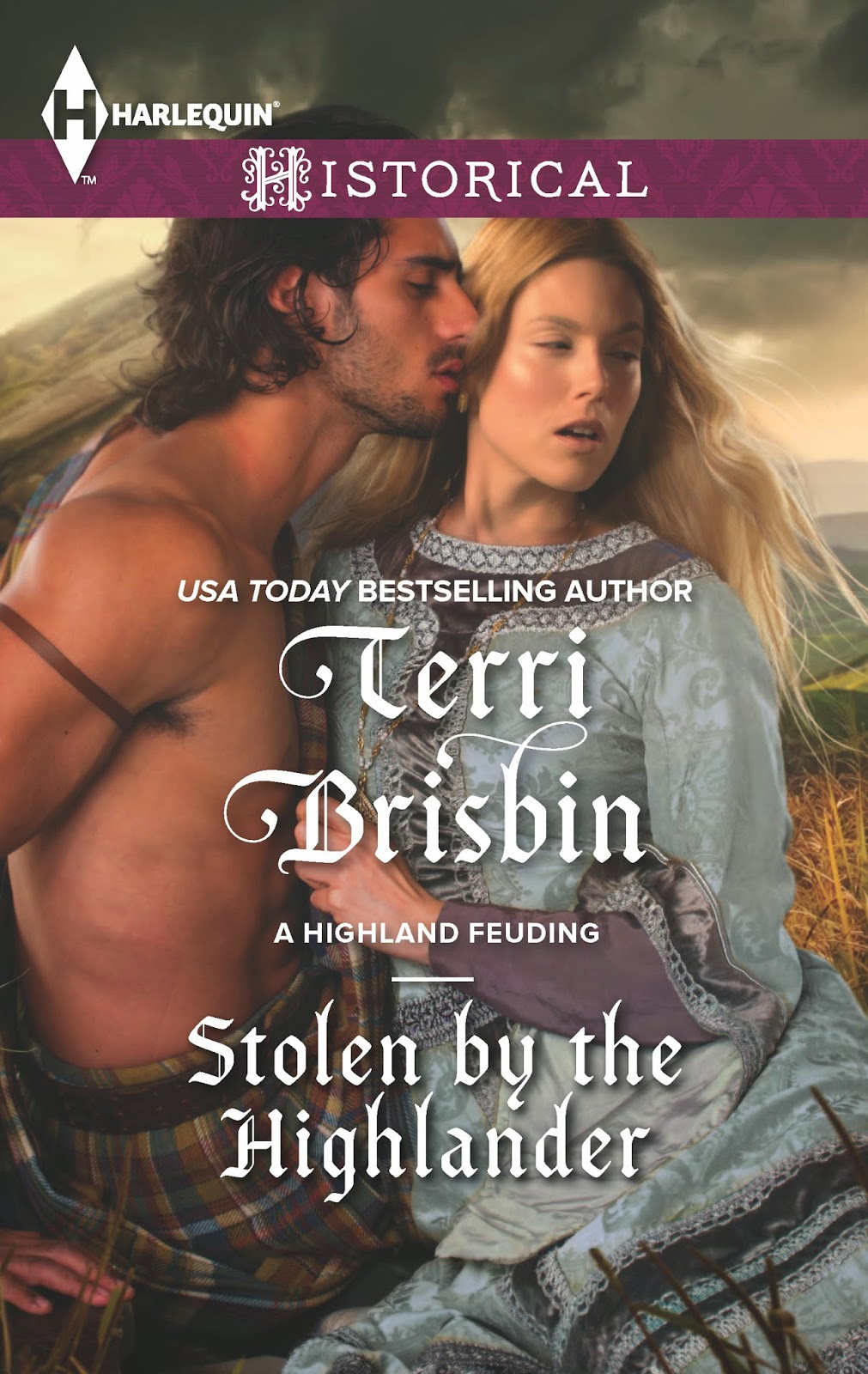 Terri Brisbin is here to share her new book with us. STOLEN BY THE HIGHLANDER is a medieval historical romance and was released on  March 17 in print. It will be available in digital April 1. Please tell my readers a little bit about your book.

Terri- While researching another project, I discovered two clans that had carried on a feud for more than 300 years! So, I knew that there must be tons of stories there. . . I began to explore various ideas for romances and the “A Highland Feuding” was born!  STOLEN BY THE HIGHLANDER is about Arabella Cameron who must marry the heir to the Mackintosh clan to end the feud.  Unfortunately,  one of the contenders murders her brother and is outlawed. When her wedding is arranged to the other, the outlaw kidnaps her on her wedding day. But Arabella doesn’t know if he – Brodie – is her enemy or her savior. . . .

Terri- I’ve always written ‘something’ but I began writing romance in 1995 when I discovered the Romance Novel bulletin board on. . cough, cough. . Prodigy internet service!I also discovered the NJ Romance Writers via Prodigy and really began focusing my efforts after attending their meetings and conference and ended up selling my second complete book in 1997!

Terri- I sold my second manuscript. Yes, I sent out the first one to the four publishers who would have published it at that time – Silhouette, Harlequin, Loveswept and Precious Gems – and it was well-rejected by all! When I began writing my second book, I also began taking note of agents and so when I submitted that second book to publishers and received an offer, I contracted with an agent to help with negotiations and career plans.

Terri- I wanted to be published to share my stories – and the characters who tell them to me in my head – with readers who might enjoy them.

Terri- My funniest story is when I received a rejection letter from a ‘big’ publisher for my time travel romance – A Love Through Time – two years after I’d sold it and a week before it was being released!

Terri- I’m a deadline-binge writer so it takes me months and months to write the first 50-100 pages and then I write the rest in the 2-3 weeks leading up to the deadline. It’s not pretty, but it’s how my brain works.

Terri- The most rewarding thing about being published is hearing from readers about my books.
Nancy- Are you a member of any writing organizations and, if so, have they helped?

Terri- I belong to RWA and some local chapters – especially NJ Romance Writers, as well as Novelists Inc and some informal author groups. I credit NJRW with helping me get published – I learned so much from the members, especially the published authors, in NJRW when I first joined and since then.

Terri- I think the most important thing is to continue to write and improve your skills and hone your talents at every step of the writing process.  And don’t expect it to be an easy process – prepare and accept rejection but don’t let it stop you! Write and write and write somemore!

1) I collect stuffed dragons!  I’ve loved dragons for a long time!
2) I helped out in the dressing room of the Cover Model Contest at the RT Convention – and had to help oil up the cover models before they went on stage for the competition! Well, someone had to do it!
3) I went to Scotland ALL BY MYSELF for three weeks and drove all over the country, highlands and islands.

Terri- I’m working on the second book of my “A Highland Feuding” series for Harlequin Historicals and then onto the third book of my “Stone Circles” series for NAL Signet. A busy writing year!

BOOK BLURB
Kidnap in the Highlands!
The morn of her wedding, Arabella Cameron is filled with dread. But if marrying a man she doesn’t love will end the feud between the Cameron and Mackintosh clans, she will do her duty. That is until outlaw Brodie Mackintosh arrives in her bedchamber and steals her away to the mountains!
Brodie knows Arabella has every reason to hate him, but a forbidden kiss soon makes these sworn enemies question everything. And when Arabella’s intended reclaims her, Brodie must fight with all his strength to make her his once more!
A Highland Feuding ~ Rival clans, forbidden love!

Check out an Excerpt HERE

How can my readers buy your book?

MORE ABOUT THE AUTHOR
In her previous lives, USA TODAY Bestselling author Terri Brisbin has lived in ancient Egypt and medieval Scotland, but in this one she’s stuck in the wilds of southern New Jersey with a hubby (wonderful one!) and kids (three adorable and finally grown sons!). When not living the life of a glamorous romance author or suffering through deadline-binges-o-writing-mania, she spends some of her time as a dental hygienist. Terri’s had more than 35 historical and paranormal romance novels, novellas and short stories published since 1998 by Berkley, Harlequin, Kensington and now NAL – in 25 languages in 20 countries! And there are a bunch more swirling around inside her brain, just waiting to be written. You can find out more than you need to know about Terri: