Welcome to the worlds of Nancy Lee Badger, Donna Steele, and Elena Dillon! Each author is giving away a fabulous prize in honor of VALENTINE'S DAY!

Yes, that means you have

Donna Steele's latest release is The Melting, Book 3 - Cohesion , a sci-fi/paranormal romance. Donna shares her best memories of Valentine's Day - 'hat I remember most about Valentine’s Day growing up was, of course, the candy and the cards. Daddy never forgot to lavish us that day, because it was his birthday. Yep, on his birthday he always had to give away gifts. I thought that was a little unfair, but not enough not to get the candy. 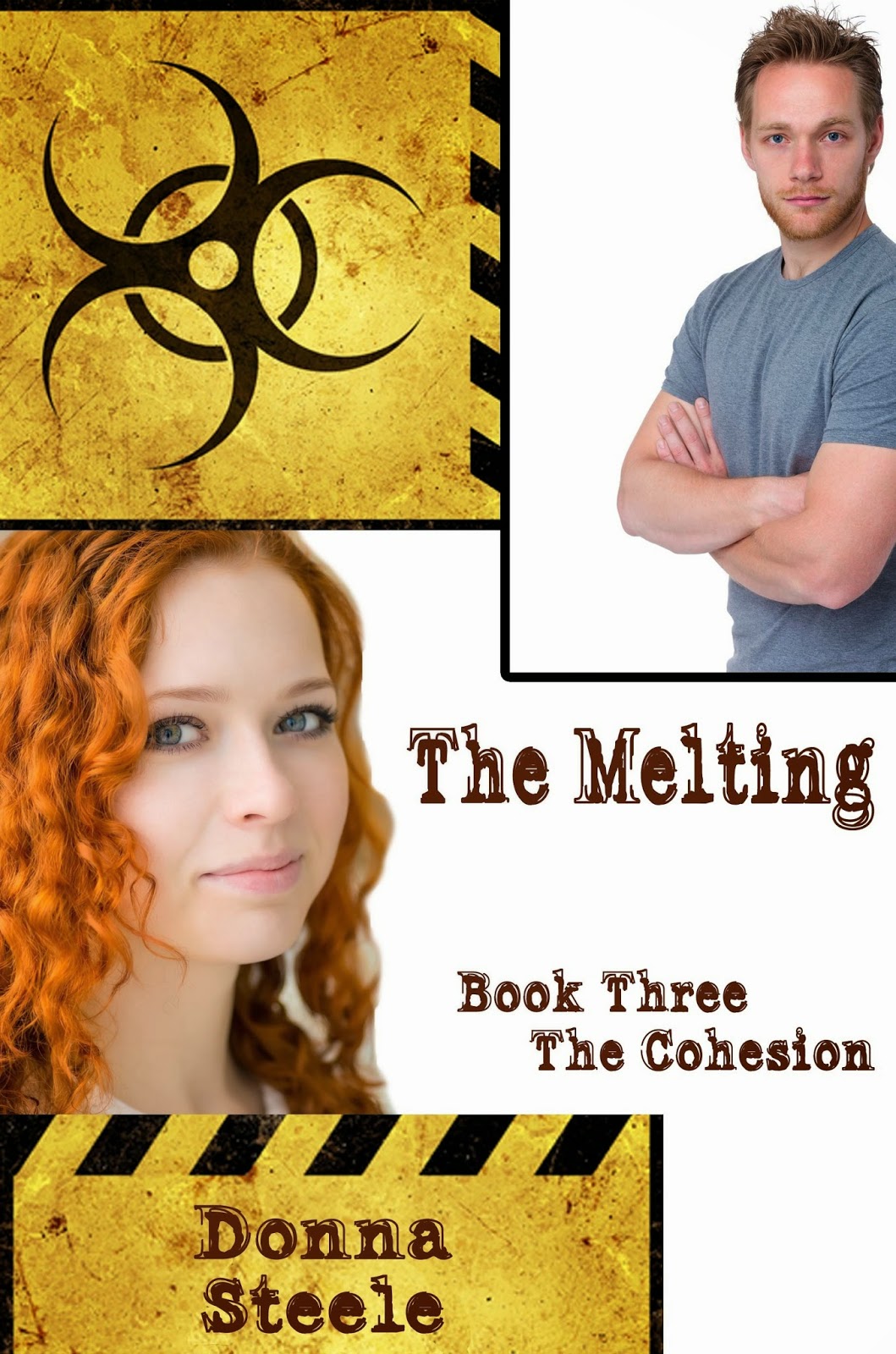 He arrived a 2 a.m. that morning in 1923 and Grandmother – who was like no other grandmother – called him one year (I think when he turned 50) at 2 a.m. as pay back for waking her that morning long ago. She always was the feisty one.

Momma always got the very fancy fold down cards that made a lovely romantic scene and chocolate covered Brazil nuts. Sis and I got the smaller heart shaped boxes and Sis gave me anything that had nuts in it because she didn’t like those.

Sis and I would look for Valentine/Birthday cards as we got older. There were usually two different ones put out by Hallmark, never a very wide selection. He’d get both of them and pretend to complain that he was being cheated out of either a Valentine or a Birthday card each year.

I still celebrate his birthday, taking cards and candy into work and leaving them for everyone in the suite. Happy ValenBirthtine Day everyone!

Blurb -
It began in the north, in the ancient cold before the birth of man. Whether from the actions of man or the cycles of the planet, the primordial ice is melting and bringing back to the atmosphere a virus. One with no known cure for modern day humans.
Rachel Gerhart has been a survivor her whole life, now she’s been changed by the virus that destroyed civilization. She trying to keep her differences under wraps, but Sid Saylor knows her secret. He’s been changed as well. Can their new abilities help with the rebuilding of a human civilization?
Find all the Buy Links HERE

Donna is giving away an AWESOME PRIZE!

by signing up HERE

Elena Dillon writes- I really love Valentine’s Day. I love hearts, flowers, and celebrating love.  Now you might not think that’s true because my stories aren’t exactly all about romance. I put my teenage characters in mortal peril. Like a lot. They are chased by stalkers, serial killers and mob murderers. This is no hearts and flowers, does he like me or doesn’t he romance. My characters are usually too busy running for their lives.

I do, however love a happy and romantic ending so I guess that’s where the romance comes in.  I love bad boys that aren’t so bad, heroes that will sacrifice anything for the love of their lives and edge of your seat endings where you hope no one dies so they can live happily ever after.
So I was really excited when Nancy Lee and Donna asked me to be part of the Valentine’s Giveaway.  I’m giving away the first three books my Breathe series each in a different format.
The Breathe series centers around the Rourke family but each story has a different set of main
characters.

Here are the blurbs:
Gone: The Breathe Prequel
Trane Braxton lives a double life. He can't risk getting close to anyone until Daisy Rourke , his longtime crush, insinuates herself into his very dangerous world.

A short story that goes back to the beginning, to the events that started the Rourkes on their journey…

Breathe
Jasmine’s life wasn’t normal for a 16 year old girl.  It hadn’t been normal since the murder of her older sister, Daisy, two years ago. Her life had been changed forever. The monster that murdered Daisy was never caught.  That was the reason her family decided to move away from their hometown in Southern California, to start over.  Hopefully in a place where the last name Rourke wouldn’t bring on staring or judgment or morbid curiosity. 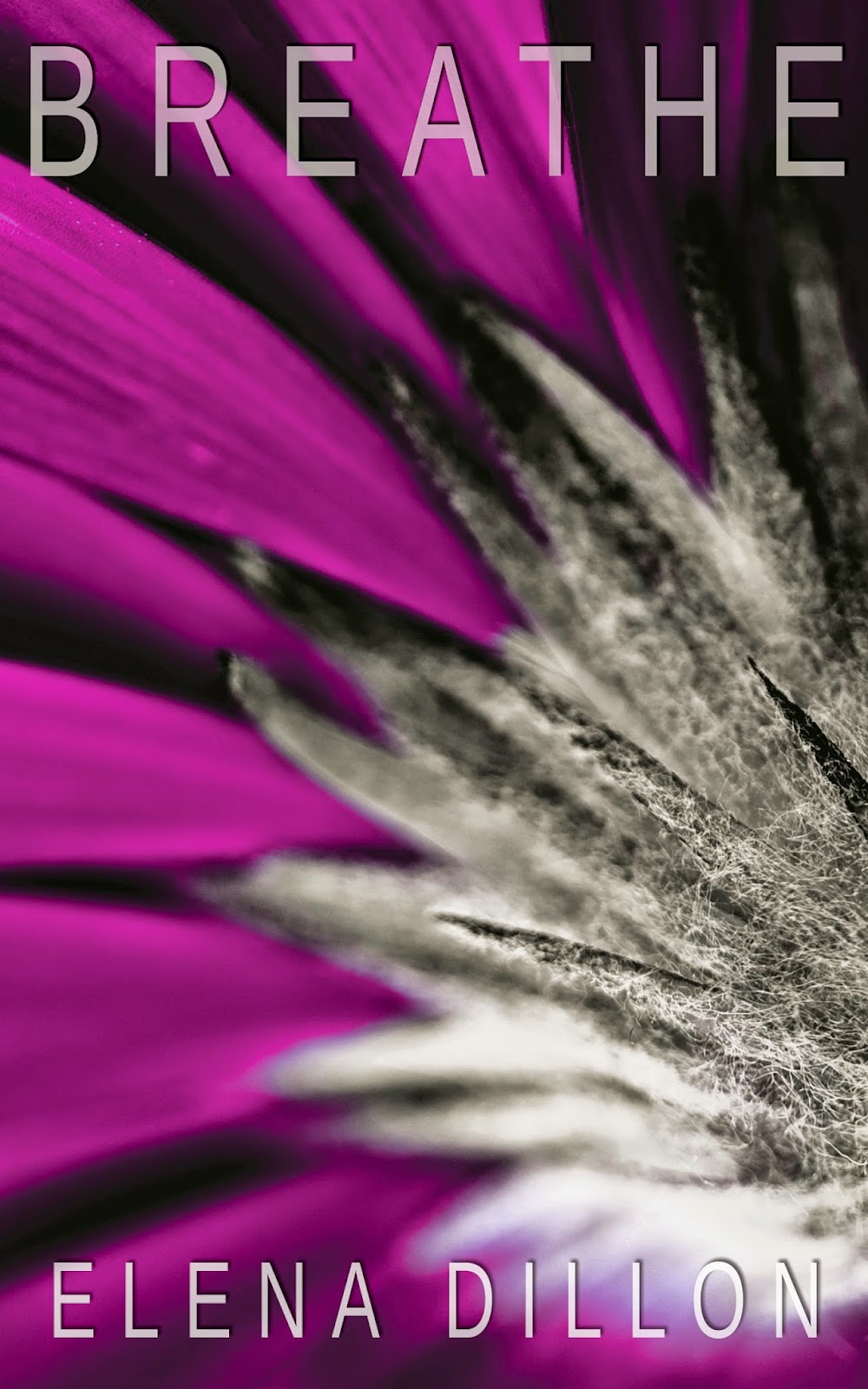 In Lafayette, Louisiana things are quite a bit different but in a good way.  Good manners, Cajun accents, and a whole lot of Southern Hospitality all make her think things are going in the right direction.  On top of that the most gorgeous boy she has ever met is interested in her. Her new friends are better than she could have hoped for, even if she is worried about what they might think when they find out who she is.  Life would be perfect if odd things didn’t keep happening.  Creepy phone calls, texts, and flowers in her locker start adding up quickly to something terrifying. Could the Monster have followed them to Lafayette? Was he coming after her this time?  Maybe she was just worrying unnecessarily…or not.

Shimmer
Chandler Raines and her “dad” are on the run. Never staying in one place for very long. It’s just not safe.  When they arrive in Lafayette, Louisiana, Chandler quickly realizes this is the place she wants to call home. Friends, a cute boy, and competitive cheerleading have her taking dangerous risks to have the life she always wanted. Risks she promised she wouldn’t take.

When her lies catch up to her, a decision has to be made. Stay or run? Will the evil that’s chased them for the last four years catch up to them? When Chandler’s past comes screeching into the present she’ll have to sacrifice everything to keep what she loves safe. But will it be enough?
Links to the Breathe Series Here!

Nancy Lee Badger's latest release is My Dark Highlander, a Scottish time travel, and the 2nd book in the Kilted Athletes Through Time series..

"When I met my hubby at college, he wore cowboy boots that added two inches to his already impressive 6' 4" height. All my life, I felt taller than the boys at my other schools. He was a refreshing sight, and we soon hit it off. 38 years of marriage and two wonderful sons later, he is still my Valentine!" 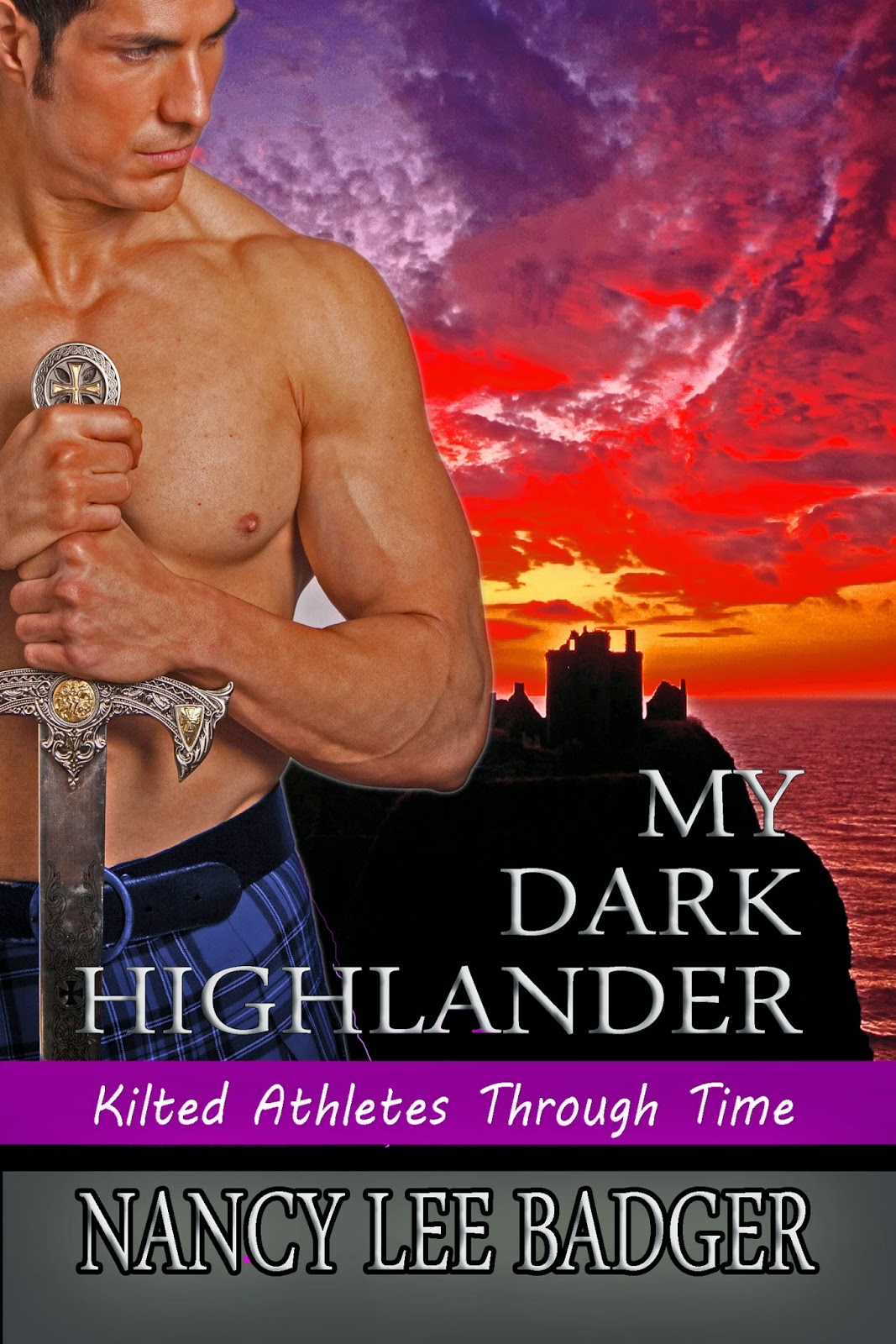 Book Blurb for My Dark Highlander

Stranded in 1603 Scotland, veterinarian Jenny Morgan is eager to get home to New England. Hiding her ability to read auras, a powerful witch comes to her aid. All Jenny will miss is the man who stole her heart, one dark night.

Laird Gavin Sinclair has a missing brother, a murderous father, and a dark-eyed beauty on his mind. When Jenny returns to a dangerous future, he sets aside his obligations and searches for her at the New England Highland Games. Jealousy and lust ravage his dark soul, until he and Jenny fight evil together.

Find all the Buy Links HERE 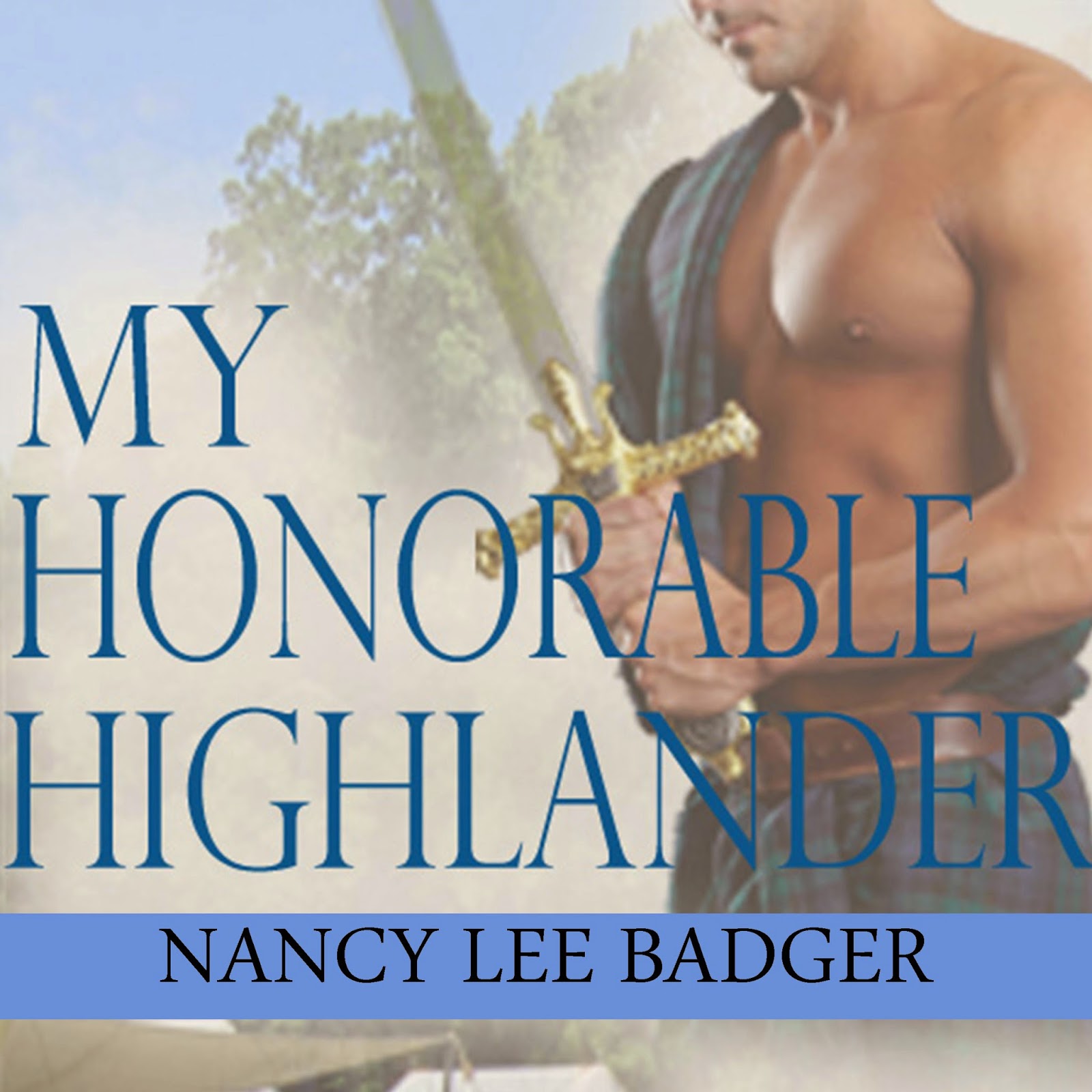 a Rafflecopter giveaway
Posted by Nancy Lee Badger at 12:00 AM